Shaky Cam and a Surprise Hit

On Jason Bourne and Bad Moms. 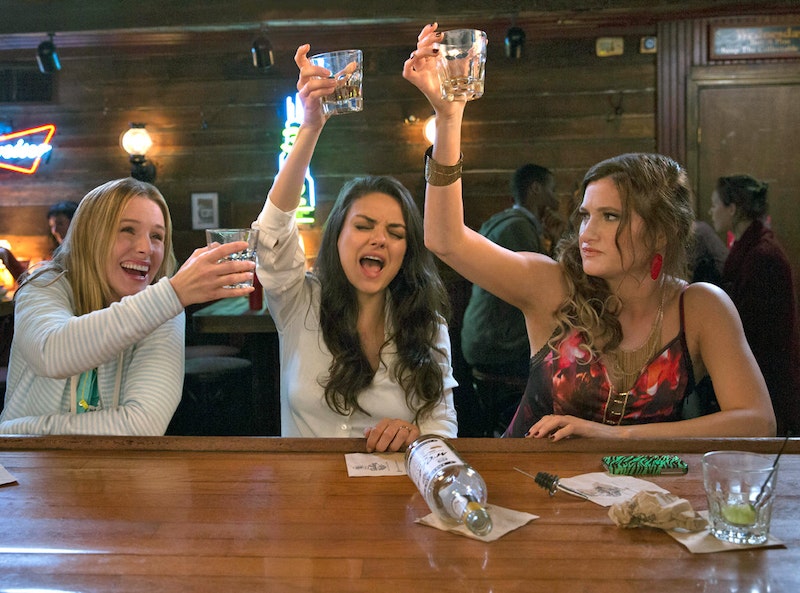 I’ve long held the contrarian view that the worst scenes in the Bourne movies are always the one-on-one fight scenes. It’s the same thing every time: Jason Bourne (Matt Damon) walks into a room. A rival jumps out of the shadows and attacks him. For the next 2 or 3 minutes, they fight, as the camera shakes violently around the room, not making clear which guy is which and aiming at the combatants’ feet half the time, until eventually Bourne kills the other guy.

Not only is this construction repetitive, but the shaky-cam style—pioneered by director Paul Greengrass and since copied by numerous, less-talented imitators—has the effect of completely ruining every sequence in which they appear.

Now, after a bizarre fourth Bourne film that they both sat out, both Damon and Greengrass are back for Jason Bourne, a new movie that features most of the virtues, and vices, of the earlier entries in the series.

Damon’s an outstanding hero. There’s a superlative supporting cast. The plot is full of intrigue and challenging ideas. But damn, that shaky cam.

Returning to the Bourne role for the first time since 2007’s The Bourne Ultimatum—but somehow not looking a day older—Damon takes Bourne through the usual globe-trotting adventure, with Greece, England, Germany, the “Greece-Albania border” and Las Vegas all showing up.

While the new movie has dropped the part about Bourne not knowing who he is, Bourne is once again on the run from the government, this time personified by CIA director Tommy Lee Jones (once again chasing a fugitive). Also on board are a possibly sympathetic CIA employee (Alicia Vikander) and an assassin (Vincent Cassel) who’s known as “The Asset.”

And in another intriguing subplot that’s sort of ripped from the headlines of Snowden’s PRISM disclosures, Riz Ahmed plays a tech CEO whose company is under CIA pressure to hand over all the data from his customers.

The film does all of the big things well. The plot is intriguing and keeps up its momentum. Jones is a delight, in the control-room antagonist role played in past Bourne movies by the likes of Brian Cox, Albert Finney, Joan Allen and David Strathairn. And Vikander, who first made an impression in the Julian Assange movie The Fifth Estate, does a lot with a limited role. And if you're unsatisfied at the end, don't worry—everything about the plot indicates that there will be more Bourne movies to come.

But once again, the way Greengrass shoots the action is just plain incomprehensible. In each fight scene, as well as elaborate chase sequences set in Greece and later in Vegas, the camera jumps all over the place, giving us no sense of spacing or axis-of-action.

I get that a lot of people are fans of this. It's “kinetic” and “chaotic.” A lot of people like Greengrass’ version but shun his imitators. But I think it’s awful when Greengrass does it too, and I’m looking forward to this sort of thing falling out of favor.

Yes, the Vegas sequence is a bit better, reminiscent of Con Air to the point where there’s even a movie stunt contributing to the demolition of a real-life casino (The Riviera.) But give me the action style of the most recent Fast and Furious and Mission: Impossible films any day. Not only are the stunts more creatively blocked, but you can actually tell what the hell is going on.

Bad Moms is a slickly produced studio comedy with values normally more familiar from mommy blogs: That mothers today are overworked and could use some appreciation, or at the very least a break. Sure, the film has some significant blind spots and goes wildly over the top in numerous places, but it’s good for a lot of laughs and its heart is in the right place.

What’s odd about Bad Moms is that it has essentially the same structure as American Beauty: A spouse and parent who’s depressed to the point of being dead inside decides one day to chuck it all and start behaving like a teenager instead. But instead of a smug drama about “hidden” suburban angst, the premise is played for broad comedy, which is probably a better decision.

Mila Kunis plays the lead mom, a working mother of two who’s married to a complete idiot (David Walton). Fed up with her daily responsibilities, she suddenly adopts a carefree, partying lifestyle along with a single mom (Kathryn Hahn) and a married mother of four (Kristen Bell).

Christina Applegate plays the heavy, a tyrannical PTA mom who is a grown up Regina George from Mean Girls. (A “spiritual sequel” to Mean Girls called Mean Moms, which was even based on a book by the same author, was said to be in the works two years ago but was never made.)

The film was written and directed by The Hangover screenwriters Scott Moore and Jon Lucas. And while the script is relatively witty, Bad Moms is yet another movie this year that claims the mantle of feminism while men wrote and directed it.

The cast is just fine, with Kunis clearly relieved to appear in a better movie than her last starring role, the misbegotten sci-fi epic Jupiter Ascending. But its Hahn stealing the show, as she often does.

Still, as much as Bad Moms raises some good points, its blind spots are obvious. This is a film that concentrates almost entirely on mothers who happen to be white, suburban, relatively wealthy and very attractive. It even drags out that old trope where people keep telling the stunningly gorgeous female lead that she “looks awful.” And, probably worst of all, it’s one of those movies set in a world where no one worries about money for a minute.

That said, this film is tapping into something that’s real and out there in the culture. It'll be a “surprise hit” that no one saw coming.