My Son John and why I'm ready for anti-communist boilerplate. 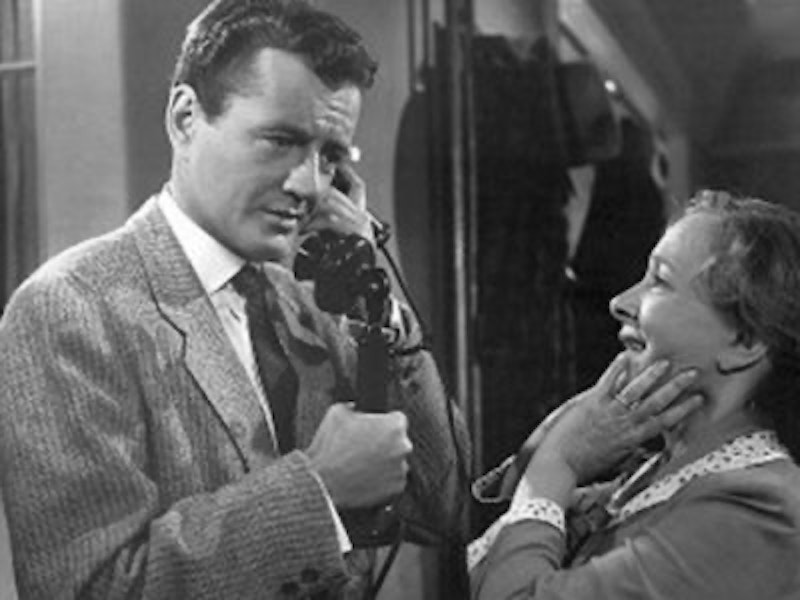 This is the fourth post in a series on political films. The third, on All the King's Men, is here.

I considered my options carefully, and decided that if I saw one more film about political corruption, I was going to do violence unto my computer screen, and perhaps to Hollywood, if I could locate it. Is this the only political story the movies knows how to tell corruption for breakfast, corruption for lunch, corruption for dinner? I've watched three classic political films from old Hollywood, and they're all less politically substantive than the glib national security state worries in Avengers: Age of Ultron.

So, that's it. I'm done with corruption narratives. Finished. Over it. Forget A Face in the Crowd with Andy Griffith being corrupt and sexually irresponsible. Instead, I'm going to watch a film that picks up an ideological ax, shoves it down your throat and starts hammering on the handle. An American film that's not afraid to stand up for American Americanness: the paranoid anti-Communist screed, My Son John, from 1952.

Which, as it turns out, is all about corruption.

At least it's not about financial corruption, though. Instead, it's about creeping ideological heterogeneity, the toxic infection of wrongthink. Dan (Dean Jagger) and Lucille (Helen Hayes) are a good Catholic Midwestern couple who simper their way from church to American Legion post to supper table with an empty-headed bonhomie that is supposed to stand in for virtue. Their two interchangeable football star sons are shipping out to fight for freedom and righteousness and football in Korea. They have a third son, though, John (Robert Walker), who doesn't play football. Worse, he's an intellectual. Worse, he works for the government. And worse worse worse than all that, he appears to possibly be a homosexual, who launches into a flamboyant parody of his dad's American Legion song as his parents stand horrorstruck. As James Baldwin wrote in his wonderful book of film criticism The Devil Finds Work, Walker's performance as John makes it clear that "his American Legion father, his adoring mother, his football-playing brother, bore him shitless, and he simply does not want to be like them." Baldwin adds, "this is heresy, of course, and Walker plays it for all it is worth, absolutely heartless and hilarious, acting out all of his mother's terrors, including, and especially, the role of flaming faggot, which is his father's terror, too."

Of course, the film is entirely on the side of the boring family. Poor John's heterodoxy is doubly punished; he repudiates his beliefs and confesses that his parents were right all along, and he is gratuitously murdered. Before that sad denouement, though, he does something rarely done in Hollywood political films—he expresses dissent.

In Mr. Smith Goes To Washington, The Great McGinty, and All the King's Men, political conflict occurs without difference of opinion. The bad guys are grifters. When they spout noble ideals, they're transparent hypocrites. As a result, those noble ideals never come into much focus. Government should maybe fund public works programs; government should maybe keep expenses down—if these ideals are contradictory, it's only because corruption prevents the implementation of universally clear principles of goodness. Absent human greed, don't all of us agree on everything, really?

My Son John doesn't lay out its policy conflicts very clearly either. But for all its reticence, it does, almost despite itself, admit that those conflicts exist. John pokes fun at the Catholic priest, who receives gifts and money from the church in this world in return for promising them benefits in the next. The bad son also expresses very vague disapprobation of the war to which his brothers have been sent.

Hollywood is not used to having even such elliptical political arguments in its films, and the strain sends My Son John into a frenzy of melodramatic thrashing. When John mildly comments that his dad's belligerent patriotism makes it difficult to abide by the Biblical injunction to honor his father, Dan loses his shit, strikes the young man with the Bible itself, and then knocks his (effete, non-football playing) son over a table.

Helen Hayes, as mother Lucille, has an even more spectacular breakdown. Faced with FBI accusations about John, she first spies on him, then repudiates him. She insists he confess, lapses into bizarre football metaphors when he doesn't, and finishes up by spiraling into a full on Shakespearean madwoman act, babbling and eye rolling. There is no real evidence against John, but the hint that he might have caveats about the American dream, and even (gasp!) about American motherhood, is an insult not to be born. The good Christian family, upright and full of love, tears off its mask at the first sign of opposition, revealing anger, violence, madness, and a bottomless paranoia. The FBI shows up, and father and mother turn on their son with rapacious, deranged glee.  And then, when he's dead, they have the audacity to grieve—all the while sanctimoniously implying that for his sins he may be in hell.

You can't really call My Son John a good film. Its pacing is turgid, the dialogue rarely strays from sophist cliché, the much-praised performance by Hayes is mostly a collection of simpering tics and supposedly ingratiating schtick. It's a Wonderful Life, The Great McGinty, and All the King's Men are indisputably better made.

But My Son John has one essential, vital element that its predecessors lack. That element is hatred. The film loathes John, and fears him, and wants him humiliated, dead, destroyed. Politics, as the era of Trump demonstrates, is fueled by passion, by prejudice, by anger and by rage. That's not the only thing that drives it, perhaps, but it's not incidental either. Capitalism insists, and communism does too, that money is the ultimate human motivator. But politics in My Son John is not just a cynical cash grab that corrupts the pure. Rather, it's a justification the pure repeat to themselves, even as they tear their children apart with their teeth.