There Can Never Be Another Freddy Got Fingered 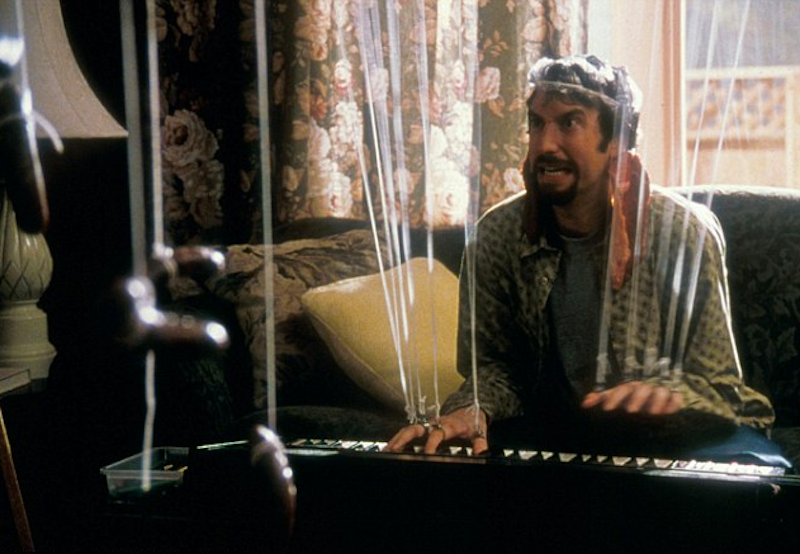 The upcoming release of Sausage Party, written by Seth Rogen and Evan Goldberg, is a remarkable achievement for the duo. I haven’t seen it yet, but the fact these guys got $30 million from Sony to make the first R-rated CGI movie—based on the premise that our food has feelings and consciousness, and the cruel and disturbing implications of this—is amazing, and a testament to their reign over comedy in movies for nearly a decade. It’s sort of risky, and reminds me of Tarantino and Rodriguez’s three-hour double feature Grindhouse, in that it could bomb and get lost, but its creators would be fine. They’ve got a track record, and could recover. The same goes for Tim Heidecker and Eric Wareheim at a smaller level: they’ve created their own cottage industry, so it doesn’t matter much if their Billion Dollar Movie comes and goes without much notice or return. They’re stable.

But in the 15 years since its release, no major comedy has been as provocative or confrontational as Freddy Got Fingered. Tom Green’s 2001 masterpiece is the product of an entertainment industry so carefree and bloated with money—it’ll never happen again. Green’s rise and fall was so rapid, he’s barely remembered today any more than MTV VJ Kennedy or Jason Biggs. But he’s a martyr for all the comfortable comedy writers making stuff like Sausage Party and The Night Before, and an inspiration for a generation of kids that grew up in a democratized media landscape—without Freddy Got Fingered, there is no Balloon Shop. But those brilliant Balloon Shop videos were made at home with no money and no support, and their creators have since languished in obscurity.

In 2001, Green was inexplicably famous. His MTV show was mentioned by Eminem in “The Real Slim Shady,” which plays over the ending credits in Freddy Got Fingered. He was married to Drew Barrymore (!), and so overexposed by the time the movie came out that it got some of the most polarizing reviews in film history. CNN called it “the worst movie ever released by a major studio in Hollywood,” Roger Ebert hated it more than The Brown Bunny, while A.O. Scott found it brilliant, a “borderline dadaist provocation.” The typical story unfolded over the next decade: after bombing at the box office and barely making back its budget, it sold millions on DVD and earned enough of a cult fanbase of insane people to keep it from being forgotten.

If you’ve seen it, it’s obvious why the movie is polarizing (licking the compound fracture, Daddy I’m a farmer, elephant cum in Pakistan, baby delivery scene)—that’s not the point. More disturbing than the gore and the attempted bestiality, Freddy Got Fingered is a cry for attention and love from son to father that was likely never answered. Rip Torn pulling his pants down and begging Green’s character to fuck him is the core, the heart, all the tantrums are a sideshow. Unlike anything else that’s come since, Freddy Got Fingered is a traumatized mind exploded and let loose with millions of dollars on hand. What makes it endure and also dates it is the enormous scale—the fact that there’s an extended helicopter sequence, major celebrity cameos, and lots of heavily orchestrated and expensive set pieces full of destruction, combined with its unadulterated and uncompromising personal vision, mark it as the zenith of the studio system pre-9/11, before the collapse of the entertainment industry at the hands of the Internet. It cannot exist today. There are a million Tom Greens on YouTube, but nothing like Freddy Got Fingered will ever be inflicted on middle America again, which is a drag, but that only strengthens its singular status in film history.