The payoff of playing the long game. 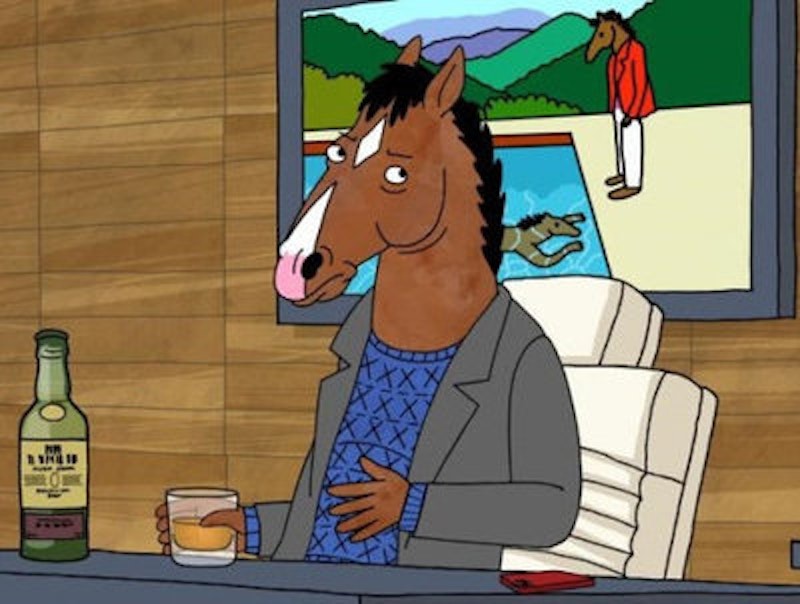 Netflix’s animated BoJack Horseman is one of my favorite new shows because of its unfettered look at depression, addiction, aging, and celebrity culture. The show, while often going to dark places, is still extremely funny. In the first season, titular BoJack asks his ghostwriter if there’s still hope for him despite his narcissism and self-destruction, ultimately pleading with her to tell him he’s a good person. Until that episode, it was easy to hate BoJack. But the show has a knack for revealing his humanity just when you think there’s none.

BoJack proves to be relatable in spite of his celebrity lifestyle. Further, the characters that surround him aren't just background scenery. The writers have done a lot with Todd, BoJack’s houseguest/roommate/freeloader, over the course of two seasons. BoJack’s agent Princess Carolyn, while frequently disgruntled with her most difficult client, has a life outside his career. With BoJack’s Secretariat movie wrapped up, its third season turns to awards season. BoJack is now clearly comfortable enough in its own skin to experiment. It utilizes the tropes of film and television. Maybe on any other show, it would be trite. But this is a show that has always paid a background loving (if satirical) tribute to Hollywood.

While mental illness and pop culture are some of the things BoJack centers around, its real core is subverting the classic sitcom. BoJack’s past is Horsin’ Around, a 90s sitcom that took on after school special topics and resolved them in 22 minutes. BoJack’s life doesn’t pan out so well, which the show tackles, as well as abortion, sexuality questioning, multiple-month benders, and death. Some things are resolved, or at least forgotten about, only to pop up again. This sometimes happens when one episode ends mid-word, and the next episode picks up where it left off. Some things return from previous seasons: in season two, he almost has sex on his boat with the daughter of a deer from his past. This comes back to haunt him in the first episode of season three when a manatee starts to talk dirty about boats.

Those are the more serious arcs of BoJack, but its jokes also span episodes and seasons. Mr. Peanutbutter, on the whim of a “great” idea, buys an absurd number of spaghetti strainers, which sit in his house and cause tension in his marriage. They’re brought up from time to time, and as a viewer, you’re not entirely sure why. Then, Pacific Ocean City (where BoJack had previously gone for a film festival) is in danger of being crushed by a giant mass of spaghetti. If only they had an absurd number of spaghetti strainers! This is already a joke worth the wait, but the payoff is even better when it also ties in Todd’s story arc of building an all-female ride-sharing app. Especially in its third season, the show is a reminder that life is messy and there are consequences to your sometimes stupid actions.

BoJack is a depressed narcissist. He hates himself, but thinks he’s better than everyone else. Episodes often have him wallowing in his terrible decisions, not knowing what he wants or, even if he did, how to not mess it up. Cuddlywhiskers, a hamster who worked with BoJack on his failed second show, tells BoJack and Diane that “it takes a long time to realize how truly miserable you are, even longer to see it doesn't have to be that way.” BoJack has indeed spent a long time indulging in depression, mediocrity, loneliness, and most -isms. But that’s how they work.

You don’t wake up one morning and say “I’m happy!” and then you suddenly and immediately are (the show’s second season opens with BoJack trying to do this and failing spectacularly, and the message that ‘you have to work at it every day’ comes in its final episode). Mental illnesses entrench themselves in our being and become a part of us that we both dislike and are accustomed to. We start to think that we’ll never be without them.

BoJack is both repulsed by and clings to his destructive behavior. He desperately wants to change, but constantly makes the same mistakes over and over again, chalking his flubs up to his childhood, alcohol, or the stress of promoting a movie. Todd finally calls him out on this in the tenth episode of the third season, saying, “You are all the things that are wrong with you.” It’s especially heavy coming from the guy who has forgiven BoJack for every awful thing he’s ever done to him. You know Todd’s right and it’s BoJack’s fault, but if you relate to BoJack at all, it’s hard to watch. I’m in a tenuous place in my life right now; I’m on the job hunt in my 20s, feeling both invincible and defeated on a daily basis. I’m not entirely sure what I want, either. It is both comforting and haunting that BoJack, a celebrity in his 50s, is relatable.

Wanting to change and needing to change are different. He doesn’t need to change, because the people around him make excuses for him time and time again. If Princess Carolyn stopped swooping in and fixing his problems, or Todd moved off the couch, or Diane actually stopped hanging out with him because she thinks they’re toxic for each other (and didn’t just say as much), he might actually be forced to learn how to change and be happy—something that has yet to happen over the course of three seasons. But maybe the writers are playing the long game on that, too.