Don’t Even Think About Cheating On My Daughter

On the Rocks, starring Bill Murray and Rashida Jones, is a great new screwball comedy by Sofia Coppola. A- 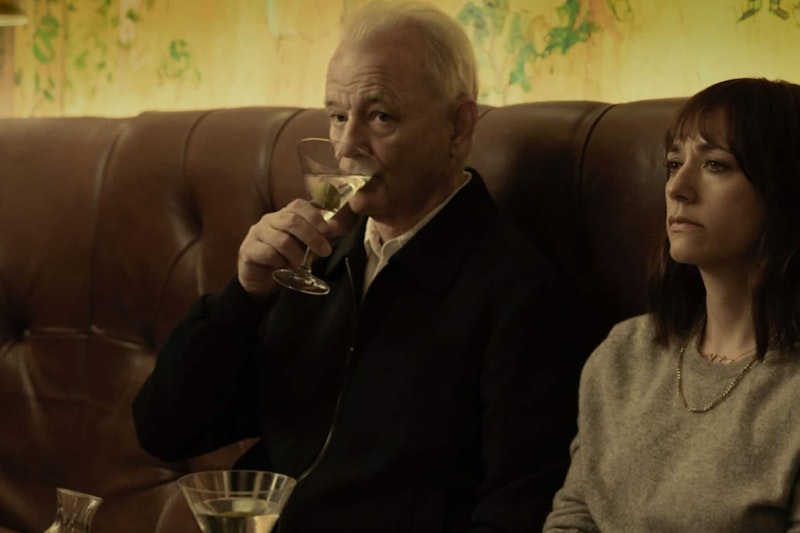 Sofia Coppola’s new movie would’ve made for a welcome respite from the desert of studio comedies, but nearly a year removed from regular movie theatergoing, the absence of romantic comedies and comedies of any kind in theaters feels even more distant. On the Rocks, starring Rashida Jones and Bill Murray, is a lot of fun—despite ostensibly dealing with adultery and absentee fathers, it’s the most light-hearted and relaxed film that Coppola has made. Now that Woody Allen’s been exiled and awaits death with his books and his clarinet, apparently content to make films overseas and show them there too, Coppola has come along to make a nice little Manhattan movie. Piano bars, marital angst, suspicion, and a viscous melancholy. Unlike Allen, Coppola doesn’t make movies as an unwelcome but necessary bodily function, so regarding New York, the eyes behind On the Rocks are so much wider.

Rashida Jones plays the straight man, as Laura to Bill Murray’s Felix, her father and a globetrotting jet-setting bon vivant who can’t help flattering and flirting with every woman he meets, whether it’s a hostess, babysitter or lesbian. He describes the evolution of women’s “haunches” and his ape explanations for male lust and female distrust. Murray does his dirty grandpa schtick but with none of the stultifying earnestness that could sink a movie less intent on being silly and remaining silly. On the Rocks is a screwball comedy, and Murray is in Cary Grant’s place, the unwelcome guardian angel of patriarchal advice and antics and hilarious schemes.

But he only gets involved after Laura suspects that her husband Dean (Marlon Wayans) starts acting strange. Very strange, very obviously cheating on her with someone from work. The first 70 minutes of this 96-minute comedy are spent trying to figure out how Dean’s able to get away with this mirage of an affair with Fiona (Jessica Henwick). Felix advises Laura to check Dean’s text messages, among other things: no texts, but Laura finds a toiletry bag full of body oil in her husband’s luggage after a work trip. Besides that, he’s disengaged from her and apparently thoughtless at every turn, more tuned to his phone than his wife and letting most of what she says pass through his head unheard.

On the Rocks becomes a bonding caper, where father and daughter travel around Manhattan and eventually Mexico to find out if daughter’s husband is sleeping with her co-worker. It’s a refreshingly simple premise centuries old and far from worn—I wish more filmmakers would commit to making movies that the Academy won’t look at. Someone has to die or have a disease for them to notice. Coppola’s fathers and daughters are fraught, and Felix and Laura are no exception, but she gets her reserved anger out at him for sleeping with his secretary when she was a kid and leaving their mom out to dry.

He has no response, but he helped her this time. Too bad the guy’s innocent: they track him to a hotel in Mexico, and see a woman in his window. It’s Fiona, and after ascending the balcony, they find Fiona (accidentally) and another woman. Dean flew home early to surprise Laura for her birthday. A few days ago, on her actual birthday, he FaceTimed her and the kids and made them open her present… a fancy blender. But by the end, she gets a nice watch. It’s a movie Carole Lombard could’ve starred in, and Jones and Murray are inheritors of that tradition to some extent. Jones is great as the overburdened mom, put off her by her airhead workaholic husband and the grim approach of her 40th birthday.

Murray as Felix is Coppola’s best dad, at least her funniest. Woody Allen jokes aside, On the Rocks shows the Manhattan of 2019 as if nothing much had changed in the last 40 years, and I enjoyed it more for that. Coppola’s compositions are tight, and every exterior is as intimate as her close-ups of Jones and Murray. They all go to the Balloon Saloon in Tribeca at one point, a place I spent a lot of time as a kid. I wonder if they still sell dildos and blowup dolls, too. A lot of this movie takes place near where I grew up. It’s nice to have something so easy come from there again.