Assholes: A Theory asks what constitutes an asshole, how assholes succeed in society, and what can be done about it, if anything. B 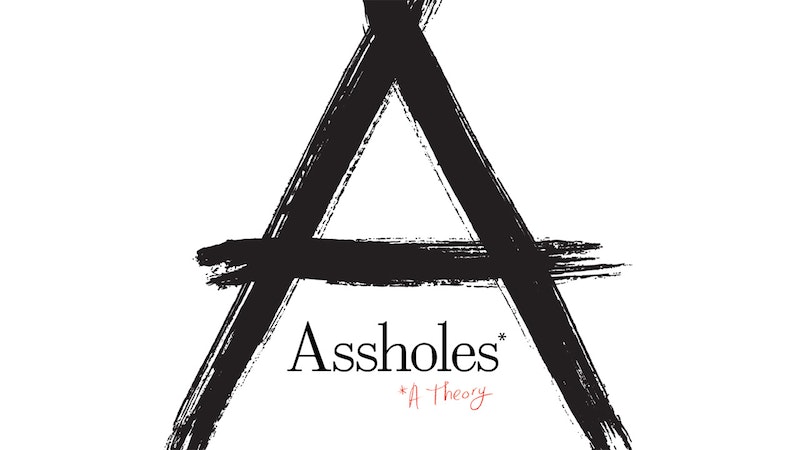 The question of what exactly constitutes an asshole, how assholes succeed in society, and what can be done about it, is a timely one. And that's the premise behind Assholes: A Theory, a new documentary that landed on VOD platforms last week.

It's not entirely about Donald Trump, and in fact, the probably soon-to-be-former president is barely mentioned. But the film likely owes him its existence; call it a 90-minute Trump subtweet. Assholes: A Theory, directed by John Walker and based on a book of the same name by Aaron James, has some worthwhile points to make, although it occasionally takes its eyes off the prize.

What's the theory? An asshole is "the guy who allows himself special advantages in cooperative life, out of an entrenched sense of entitlement, that immunizes him against complaints of other people." There are different subcategories explored as well-the-drunk asshole, the smug asshole, the asshole boss, etc.

Assholes: A Theory looks at how assholes disrupt society and are often difficult to stop. Talking heads, including Monty Python legend John Cleese, pontificate on the subject, along with topical movie clips. Some of them are too well-chosen—the inclusion of a few seconds of the Matthew McConaughey lunch scene from The Wolf of Wall Street inspired me to pause the movie and watch that whole scene on YouTube.

Since this is a Canadian production, it amusingly explores whether Canadians can be assholes, before concluding that they can, in the form of hockey goons, the late Mayor Rob Ford, and certain elements of the Royal Canadian Mounted Police.  Ford, and former Italian Prime Minister Silvio Berlusconi, serve as the film's avatars of asshole-ism in politics, rather than Trump. One 2020 U.S. presidential candidate gets some screen time as an example of an asshole, but it's Kanye West.

The film spends much of its second half going through different industries, most notably finance, showbiz, comedy, high tech, law enforcement, and even the world of surfing, and how assholes run roughshod over them.

Where the film goes wrong is when it just coalesces into standard critiques of some of these professions, none of which are particularly original or interesting. There are a lot of assholes who work on Wall Street! Narcissism has played a role in the various abuses by Silicon Valley! Harvey Weinstein's crimes were in large part facilitated by his being an asshole! Raise your hand if you've never heard those ones before.

Also, an operative part of the asshole equation—the appeal to the opposite sex held by so many assholes—is mostly left unaddressed in the film, except for a brief moment when a self-proclaimed teen asshole brings it up.

Harry Frankfurt's essay/pamphlet "On Bullshit," was written in the 1980s but became a hugely popular bestseller around 2005, was a more prescient examination of the Trump era, before the fact. That might’ve been the basis for an even more illuminating documentary.