Reagan and Curtiz’s Fantasia of Sacrifice

This is the Army, a 1943 American propaganda film, is a hallucinatory watch now not for its call to service, but to self-sacrifice. 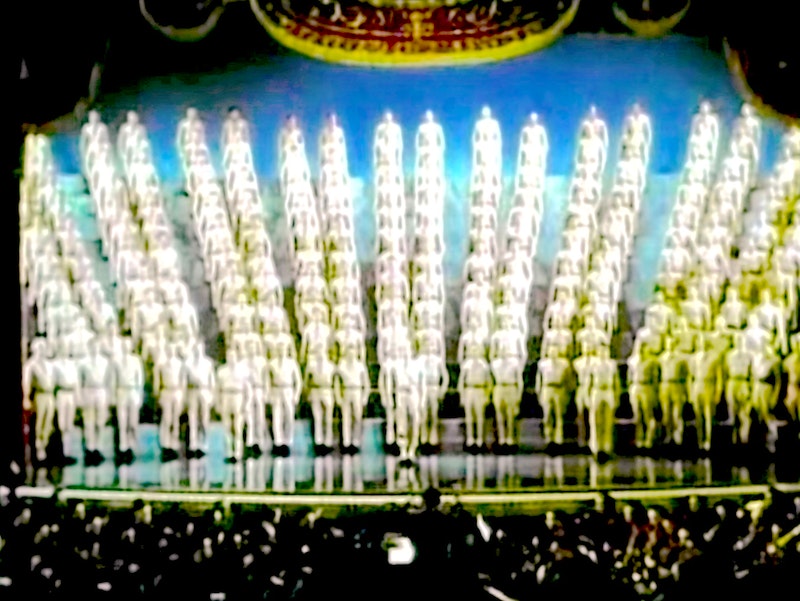 Lost to the memories of men and women who went to their grave long ago, not much is known about Ronald Reagan’s film career today. You can look up his filmography, and you might’ve seen his small part in Dark Victory with Bette Davis, but in 2020, Reagan is remembered for being President of the United States—Bedtime for Bonzo doesn’t even enter the conversation. That might’ve been the role most invoked during his later career in politics, but 40 years after his election, Reagan’s presidency and his earlier work in Hollywood have blurred and gelled together into a pure paste of performance and entertainment. He retired from acting in 1964 after playing a villain (for once) in Don Siegel’s The Killers. He was elected Governor of California two years later.

One of Reagan’s most substantial on-screen roles (besides King's Row) was in Michael Curtiz’s 1943 film This is the Army, a revue of two Irving Berlin “soldier plays,” one from each World War. Berlin appears in the film, singing and at the butt of a good joke. To watch This is the Army in 2020 is a hallucinatory experience at times: this is a pitch of propaganda and clear, open commands that ARE completely absent from American media today. Between musical numbers, This is the Army moves through a series of tableau-like scenes of life during wartime: near the top, we see an immigrant fruit merchant lamenting America’s entry into World War I, quickly followed by her son, healthy wealthy and wise, ready to enlist. “You see, ma, we didn’t start this one, but it’s up to us to finish the job!”

In another “example scene,” leads Reagan and Joan Leslie discuss their wedding plans, obviously in flux after the bombing of Pearl Harbor. Leslie hems and haws, upset about the disruption of their routine: “We can’t stop living our lives, can we?” Reagan shakes his head: “No, we can’t for now. I’m not a private citizen right now—I’m a corporal.” Calls for self-sacrifice extend beyond solders singing about roosters and buglers ruining their morning: everywhere in this film, we’re told that this fight will not end anytime soon, and that Americans need to come and stay together—everyone. They were facing the Nazis, yes, but where was this attitude from the government and the media during the COVID-19 pandemic?

Of course, as in 1943, the responsibility has been passed onto the citizen: it is the citizen’s duty to become a soldier and enlist or be drafted; if female, homosexual, or otherwise compromised, you’d work in a factory or a military base at home. In Berlin's play as filmed by Curtiz, there’s little of the introspection or melancholy that define John Ford’s war films. Even in a dizzying montage sequence showing the life and death of an American boy born during the First World War only to grow up to die in the Second. Curtiz breezes past this image and its implications, unlike Ford in The Long Gray Line, one of the most structurally unusual films I’ve ever seen: 90 minutes of loving military farce with a final 45 minutes of unrelenting death and despair.

This is the Army was not made to last, it’s a product of its time despite being visually astonishing, even in an nth generation bootleg. Spot-on impressions of Charles Boyer, Mabel Normand, and Herbert Marshall will buzz by a modern audience with no recognition, and the “mammy” routine with dozens of white performers in blackface followed directly by an “example scene” with a bunch of real Black G.I.’s is wildly disorienting. But the most vertiginous aspect of This is the Army isn’t its outdated cultural assumptions and values—it’s the images and camera movements, directed by the most underrated filmmaker of Classic Hollywood, Michael Curtiz.

Curtiz is in top form here: only a year out from his masterpiece Casablanca, he turns what could’ve been a dull and inert piece of propaganda into something cinematic, something that has life beyond the war its producers are promoting. Curtiz’s penchant for crane shots that establish a scene before descending into it to learn more is everywhere, as is his gift for transitions: to show that World War II has begun, there’s an astonishing dolly-in to a close-up of a cloth globe showing “POLAND” with a thick black border against Germany. It catches fire, destroying “POLAND” as the flames dissolve into one of Reagan’s first scenes.

As the numbers continue, and celebrity appearances by Irving Berlin, Joe Louis, Frances Langford, Kate Smith, and Ezra Stone pass by unnoticed, only a few soldiers die, but we get their requisite “example scene” with the parents accepting their loss with a stiff upper-lip: “He died for his country.” His country, he loved. Planes fly against beautiful miniatures of cities and skies as Curtiz uses mailboxes, newspaper boxes, trashcans, and street signs to indicate shifts in time or location. There’s no need to keep track of what war we’re in—this film explicitly says that there will be “no war to end all wars,” and that one day, your time will come. The viewer must be prepared to sacrifice their life for their country.

Propaganda this arch is jarring today because this is the last time Americans of all ages more or less have been asked to possibly give up their lives for the greater good of the country. And it’s all dramatized in Classic Hollywood Monoform, shot by a master director in the Technicolor process we usually associate with The Wizard of Oz, Meet Me in St. Louis, She Wore a Yellow Ribbon, and All That Heaven Allows, with a mix of minor actors—all forgotten today—mixed in with real people and real members of the military. This is the Army is more bitter and uncompromising than most films because it’s dealing directly with reality: not only addressing it, but trying to manipulate it.

This is the Army fell into the public domain decades ago, as did Curtiz’s Life with Father, an adaptation of the record-making Broadway play starring William Powell and Irene Dunne that served as a fine riff on Meet Me in St. Louis (again, even in degenerated form, Life with Father is a striking example of Technicolor filmmaking). The copies I’ve seen of these films are nth generation transfers, degraded and drained of three-strip brilliance. But there’s so much bleed that Curtiz’s epic compositions, featuring over 100 soldier-dancers in Irving Berlin’s numbers, begin to look like church paintings. Their uniforms are golden and as they stretch back into formation, they meld into the background matte night sky. What to make of the solid 25 minutes of soldiers in elaborate babydoll drag? It was a stressful time for all.

It’d be easy to mock the over-the-top pleas to service in This is the Army, or to tear apart its “murderous ideology,” but that’s obvious. Watching the film today is striking because some of the most successful filmmakers in the country—Curtiz, along with producers Hal B. Wallis and Jack Warner—were walking in lock-step with the government to sell the war to the public. The government wasn't involved in any substantial way with the production of This is the Army, and they didn't need to be: Hollywood was on their side. For people, apparently it was an easy sell. This was the last time Americans were asked to do anything for their country.

Watch This is the Army with an eye to how campaigns of these kinds will be waged in the future, and how you can spot them. The passing of Prop 22 in California is discouraging, especially since a main proponent is a close associate of Vice President-Elect Kamala Harris. How can American cinema confront labor exploitation today? Will anyone be able to produce something like The Grapes of Wrath?

Would you die for this country? Of course not. Depends on the circumstances, but for 79 years, since the start of WWII in America, we’ve been told to keep to ourselves and have fun. When does that run out? Bullhorns and tanks won’t work on this country. Movies will.