On the Way Down

Ben Affleck could’ve had a career-changing performance in The Way Back. C 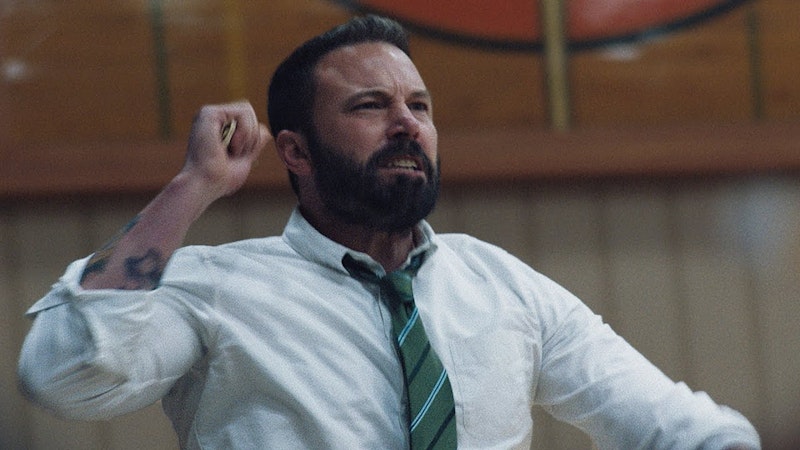 The Way Back could’ve been a chance for Ben Affleck to play “himself,” to make a drama about an alcoholic basketball coach that dovetails with his own public struggles with alcoholism and bad personal decisions. There’s that famous photo of a wasted Affleck gripping a cig next to a bottle of Heineken on a balcony. Who knows what he was anguished over: his botched Batman movies, his crumbling marriage, his drinking. But this could’ve been a really great movie if Affleck were smart enough, or (more charitably) interested in making challenging art. The Way Back is so good for a movie not rife but driven by clichés, oozing stock characters, lines, situations, and story arcs. It’s compelling for precisely the reason it tries to smother: Affleck plays Jack Cunningham, a washed-up rummy with a divorce, a dead kid, and no future.

Cunningham’s asked by his high school to return to coach their lousy team. He was a star player in the early-1990s, but rejected full rides to play college basketball out of spite. Mister Cunningham “never liked” Jack—it’s never specified why—so Jack dropped out, he ran away. He “fucked up” his life for no particular reason other than self-loathing. Fair enough. The Way Back didn’t need to be a heady experimental adventure like his brother Casey’s masterpiece I’m Still Here, but if only the movie could’ve ended when his kids were on the upswing. We don’t need the nearly 30-minute denouement of Cunningham fucking his life up again, only to be restored to some kind of dignity by the end of the film.

The Way Back, directed by Gavin O’Connor and written by Brad Ingelsby, is a footlocker for cinematic clichés: overhead shots of Cunningham drinking beer in the shower, lens flare on the sad shot of him smoking a cigarette during a break on his construction job, every beat hitting at exactly the point you know it will. Most films are formulaic to some degree, but O’Connor and Ingelsby show a complete lack of curiosity in exploring how Cunningham the character intersects with the movie star playing him. Maybe Affleck isn’t eager to risk immolation like Joaquin Phoenix was from 2008 to 2012. Can you blame him?

The Way Back is formulaic, but it’s well-cast and compelling despite its cookie-cutter approach. The kids on the team fit into neatly carved spaces we all recognize: the hothead who comes around, the silent leader, the clown, the insecure center. Affleck’s relationship with these students is moving, and I kept thinking of Bradley Cooper’s similar semi-dark turn in A Star is Born. But Cooper hasn’t had the kinds of paparazzi struggles that Affleck’s endure his entire career, going all the way back to 2003 and J. Lo and Gigli. He’s wanted to be recognized and accepted as a serious actor for decades, and he’s not there yet—not because he lacks talent, but because he chooses shit scripts like this and doesn’t immediately demand a rewrite (like the thorny Edward Norton).

Affleck isn’t a bad actor. He does good work in The Way Back, but nothing in this film is exceptional—perhaps most frustratingly, it does hint at what Affleck can do with really serious substantive parts. But it only hints, and never goes beyond the schmaltz. Ingelsby’s script is amateurish, but Affleck’s acting isn’t. Unfortunately, a face that’s been memed a million times can’t save a sinking ship on its own. The Way Back is only worth watching for filmmakers and casting directors who want to know that Ben Affleck can still do something. I wish someone would take the cues of the Safdies and Paul Thomas Anderson and cast this man in a role that could actually change his career.