Run on Down to Cancel Town

On two new movies, The Hunt (B-) and Run This Town (C-), that revel in the politically incorrect. 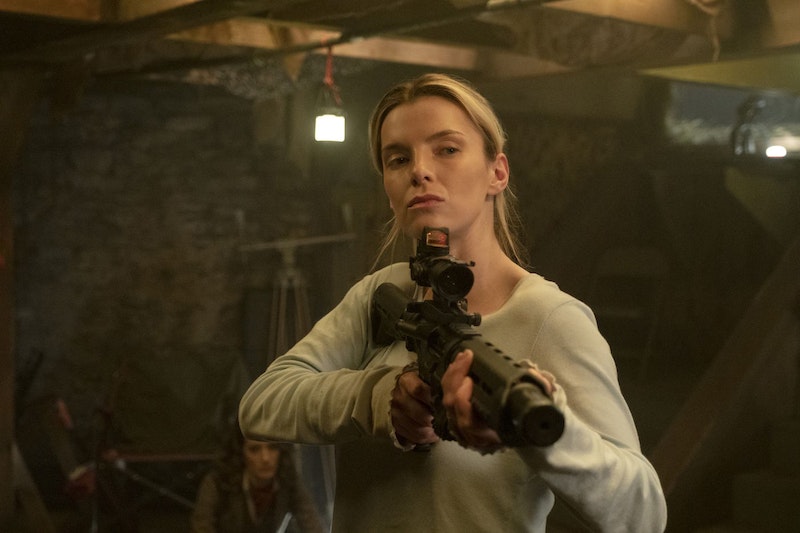 Amidst all the bullshit in 2019 about "cancel culture," there was only one movie that was cancelled. That was The Hunt, a satirical horror thriller from Blumhouse that was set for release last October. But after the El Paso and Dayton shootings—and a tweet from President Trump that implied the film was advocating the murder of his supporters by liberals—the release was called off.

That the actual film's sympathies, for the most part, go the opposite way is perhaps a warning sign that it's unwise to launch social media campaigns against movies one hasn't seen, even if you're not the president. But at any rate, The Hunt has been un-canceled and hits theaters this week. And while there's a lot that works in the film, its main conceit doesn't hold together.

The plot of The Hunt, directed by Craig Zobel, does entail elite liberals hunting down "Deplorable" conservatives for sport. But the heroes of the film are with the Deplorables. My colleague Todd Seavey called it "one of the most conservative films ever made."

The film, to its credit, takes its time explaining things. A group of people, visually coded to look like rural, working class white conservatives, are in a field with muzzles on their faces, surrounded by gunfire. After several twists and turns, a woman named Crystal (Betty Gilpin) emerges as the heroine, facing off with a group of wealthy liberal elitists (which includes Hilary Swank and Always Sunny star Glenn Howerton.)

Gilpin, best known from GLOW, delivers a movie star performance, smart and charismatic. The script—adapted by Damon Lindelof and Nick Cuse from the nearly century-old short story "The Most Dangerous Game"—is witty and often hilarious, including some outstanding jokes about the action movie Tears of the Sun. And refreshingly, there's little correlation between how famous an actor is and how likely their character is to die violently.

It's an interesting tack from Blumhouse, the outfit behind Get Out, and especially Lindelof and Cuse, the showrunner and writer (respectively) behind last year's Watchmen revival, one of the more prominent examples of "woke" entertainment done exactly right.  But the film's central metaphor just doesn't work. For all of the reasons to distrust the smug, woke liberal elite… they don't really want to violently murder their political opponents. At other times, the film attempts to make itself a satire-of-all-sides, but it's not committed to that, either. Ike Barinholtz, who previously wrote and directed a 2018 movie, The Oath, that did just that, appears in The Hunt as well.

The film cheats by making Gilpin's character the heroine but doesn’t give her anything racist or controversial to say. And the film also buys into the untrue frame that Trump supporters are entirely working-class underdogs and Trump opponents are all nose-in-the-air elitists.

What's ironic is that the genesis of the "Deplorable" was that Hillary Clinton, during the 2016 campaign, described the more racist segments of Trump's base as the "basket of deplorables." Those in that cohort instantly embraced the name, essentially declaring, "You think we're a bunch of hateful racists? We'll show you—by being MORE hateful and MORE racist."

The Hunt supposes, following the rise of the bogus Pizzagate conspiracy theory, that the leaders of the Democratic Party decided "You know what—let's prove them wrong by really doing Pizzagate." It's a great idea in theory, but falls apart once it's taken to a further extreme. B-

Directed by Ricky Tollman, Run This Town mostly deals with the Ford scandal through the eyes of a group of millennials—a journalist investigating Ford (Broadway star Ben Platt) and a couple of his staffers (Aladdin's Mena Massoud and Nina Dobrev). Ford appears, played under a massive and unsightly layer of prosthetics, by the normally capable actor Damien Lewis.

The film has some points to make, about how certain misdeeds of Ford's, starting with the sexual harassment, were more worthy of disdain than the ones that made more news, and also about the pitfalls of the Millennial workplace, and how newspapers are too dependent on stupid listicles. Even so, the plots at the center of Run This Town in no way justify being put at the forefront of a real-life story that's much more interesting—especially the real-life journalistic story that the movie ignores. Plus, the tone is completely wrong.

There was a fantastic Italian movie last year called Loro, directed by Paolo Sorrentino. It was about Silvio Berlusconi and had the longtime Italian political titan's sycophants as its entry point. Loro begins with a sequence in which one character, a youngish mid-level political fixer, is having sex with a woman on a boat, and notices that she has a tattoo on her lower back of Berlusconi's likeness. This causes him to have an epiphany—that he needs to get himself into Berlusconi's inner circle. I'd love to see a future Trump biopic take that tack, with the first act about how, say, Corey Lewandowski wormed his way into Trump World.

That's a great roundabout way to tell a story about a scandalous politician. Run This Town isn’t. C-