Portrait of a Lady on Fire looks gorgeous, but it isn’t romantic. B 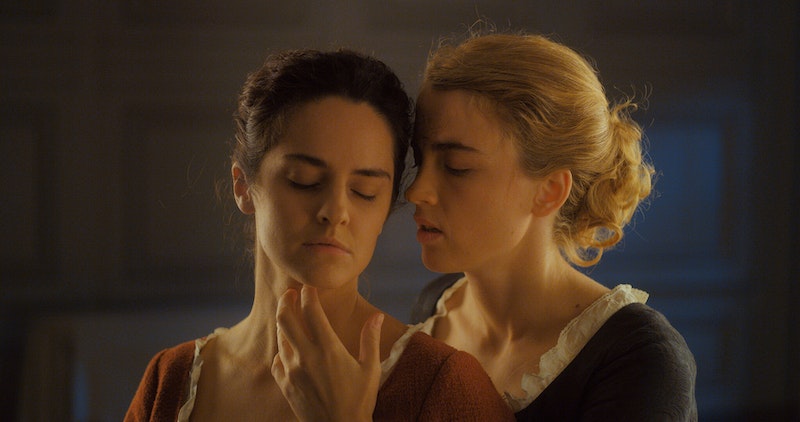 Céline Sciamma’s Portrait of a Lady on Fire arrived at Cannes last year and left everyone hot all week. In the 10 months since it premiered and ran the festival circuit and opened in New York and Los Angeles, all I’ve heard are raves and the kind of breathless rapture reserved for the best films about love. “Impossible love” does me in like nothing else, I don’t think there’s a more compelling subject (then again, it’s just what usually makes me cry. William Goldman said for him, it was “stupid courage,” as shown at the end of Gunga Din—instant waterworks.) Portrait of a Lady on Fire is set in late-1700s Brittany, where a modest painter named Marianne (Noémie Merlant) is hired to paint a portrait of a young aristocrat named Héloïse (Adèle Haenel). But we begin years later, when Marianne has become a spinster art teacher modeling for adolescents.

One of them brings out a tableaux of a young woman dressed in black, the bottom of her dress caught by a lip of fire in the night. Marianne insists they put it away, and one of them asks what it’s called. The film’s title isn’t shown at the beginning, but here we have a diegetic presence of the title spoken by Marianne and, in non-French territories, the text itself in the form of an italicized subtitle. Title-cards, text, and opticals are so beautiful in movies and they’re woefully underused for dramatic and emotional effect.

We go back some years to Marianne and Héloïse, the former commissioned in secret due to the latter’s reluctance both in being painted and married off to a man she’s never met in Milan. Her mother, played with severe grace by Valeria Golino, has no time for Héloïse’s angst and refusal to participate in the life laid out for her so nicely by everyone. Why can’t she just get along? Well, she’s gay.

By the time Marianne and the audience meet Héloïse (at first she hides herself in mounds of black fabric and veils, designed by Sciamma), it’s clear she’s confident in her sexuality and understandably miserable being forced into a blind, loveless marriage. Marianne’s immediately charmed, but she’s the more hesitant partner here. The Countess asks Marianne to follow her daughter on her walks and study her image that way—Héloïse refuses to model at first. But after so many days, and so many walks, and so much wordless blissful crush high ecstasy, they kiss and consummate what should be the beginning of a long and happy relationship. But of course it’s forbidden.

Sciamma won Best Screenplay at Cannes, but I think her script is the last thing going for it. At a point where Portrait of a Lady on Fire could keep playing it subtle, Sciamma stuck this exchange in: “Why can’t you paint men?” “To keep women from becoming great artists.” As if a 1700s painter in France would say something like that. Sciamma’s film reminded me of Little Women, and while I enjoyed its comparatively Spartan and subdued approach, I missed Greta Gerwig’s whirling dervish of a movie about very real people. Sciamma's film never takes off because its subjects are exactly that, subjects, and they may be romantic one frame at a time, but never moving.

Portrait plays mostly without words but its conclusion is foregone, and it lacks the atmosphere, pace, and impact of something explosive like All That Heaven Allows, Carol, or It Happened One Night. Claire Mathon’s cinematography is commanding and luscious when necessary. Despite being shot digitally, there’s an unreal or hyper-real veneer over the film, as if it were its own 21st-century digital museum painting, running exactly two hours.

As I was leaving the theater on Tuesday night, I overheard someone say, “What, you don’t like movies about two women giving another woman an abortion?” I wish I heard more of their exchange, or more of the post-show chatter amongst the sparse weekday night crowd of mostly middle-aged women and their silent partners. (I didn't do a census, but after a trailer for the restoration of Elem Klimov's enormously intense war film Come and See, I heard one woman behind me say, "That made my hearing aid go off.") Marianne and Héloïse do give Sophie, the maid, an abortion, and part of the process involves going down to a bonfire with a bunch of other women way out in the woods. As the three of them make it down there, the group breaks out into a tribal song, connecting with the earth and themselves completely, knowing that this is how life should be—but, alas. And that "but, alas"—is what kills Portrait for me. When I type, “Every step is predetermined,” I considered the other movies I’ve already mentioned and wince. All of them are like that, more or less, it’s just a matter of whether the couple stays together or not.

Sciamma’s film is well-made if not exceptional. The film is too cold to be romantic, too mannered and precise to be risky or unclear, two things every crush is. It’s a beautiful portrait, but it’s not alive.