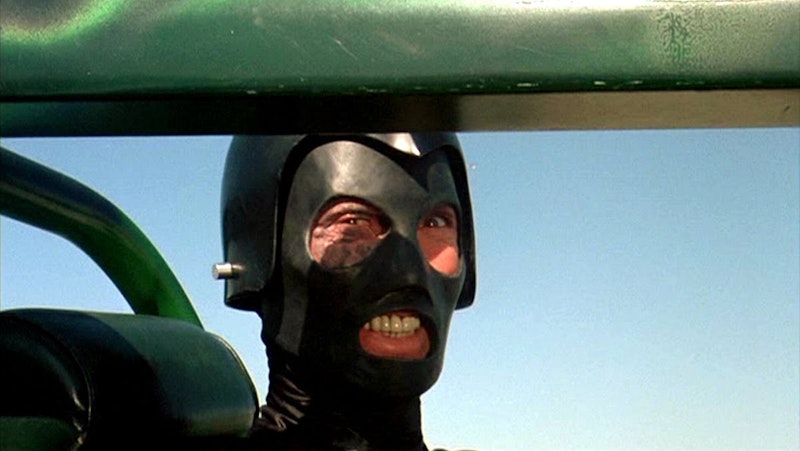 The IMDB credits Roger Corman, “the Pope of Pop,” as a producer on 415 movies. Not many are known for high quality. But Corman’s filmography has interest. When the Criterion Channel streamed a collection of 1970s science-fiction movies in January, one of their picks was a Corman feature—and it thoroughly deserved to be there.

Directed by Paul Bartel, 1975's Death Race 2000 is a legitimately entertaining film. It’s the story of a future America where a transcontinental road race is a national obsession. The few drivers, and their navigators, are hero-figures despite or because running down innocent bystanders adds to their score. The nominal hero is the mysterious driver Frankenstein (David Carradine), as seen through the eyes of his young navigator Annie (Simone Griffeth).

Frankenstein’s name comes because he’s been rebuilt out of prosthetic parts after a series of crashes, but unbeknown to anyone he harbors a private scheme of revenge for all he’s suffered. To pull it off, he has to win the race against rivals including Matilda The Hun (Roberta Collins), Calamity Jane Kelly (Mary Woronov), and his fiercest rival, Joe “Machine Gun” Viterbo (a young Sylvester Stallone, who’d write and direct a sports-related movie of his own a year later). He also has to cope with a mysterious Resistance, bent on overthrowing the “United Provinces of America” who emerged from the “world crash of 79" as “the greatest power in the known universe.” But Annie herself has connections to the mysterious Resistance.

This is a fair amount of plot for an 80-minute movie, since it has to bring out the (admittedly broad) characters of the drivers, show their conflicts, and establish the world and the rules of the race. But it manages all thus nicely, moving at berserk speed, never taking itself seriously. Death Race 2000 mixes effective comedy bits with car chases, social satire with grindhouse energy, camp with violence, and ends up a very solid film.

Corman wanted to make a movie to cash in on the publicity for Rollerball, which also opened in 1975, so he bought the rights to Ib Melchior’s short story “The Racer” and put together the film that became Death Race 2000. It’s far better than Rollerball, not least because it has no compunction about using violence to entertain. It knows that violence sells, and it revels in the bread-and-circuses ethos at the same time as it mocks it.

Unlike Rollerball there’s no tension between the mockery and the violence. That’s why the film’s good: it knows what it is. It knows it’s an action-satire that uses violence because violence is fun to watch—in fiction. And it’s smart enough to know there’s a difference between the way people watch a science-fiction movie and the way they watch news.

You could argue that sports are something of a gray zone between the two, between fiction and current affairs. Broadcasters and sportswriters cobble narratives together out of actual athletic competition. They build characters from professionals doing their job. Sometimes, audiences get so disconnected from the spectacle of a sports event they cheer people getting hurt.

It’s not saying much to observe that Death Race 2000 does a far better job than Rollerball of exploring these weird narratives. There’s an oddly quiet scene where Frankenstein meets one of his fans, and as it plays out it shows what drives the fan—what perhaps drives any fan: a search for meaning. It all ends in blood, if not tears, but that’s the way Death Race 2000 operates. It doesn’t make subtle points. It makes loud, explosive points, almost as a side effect of making loud explosions.

Inevitably, as an exploitation movie from the 1970s, not all of it’s in the height of good taste. Notably, although it has a fair number of strong-willed women, they’re all topless. Most of the nudity’s in a completely ludicrous scene where the driving teams have a massage together as part of the race broadcast (itself narrated by a send-up of Howard Cosell). The nudity’s gratuitous, but knowingly gratuitous—the movie tells you it’s in there because sex sells.

The movie’s not quite clever enough to go entirely meta-fictional, which is likely for the best. It focuses on what it does well: a specific kid of ludicrous mayhem. Costumes and car designs are over-the-top. Gleeful murder of innocent and not-so-innocent bystanders is consistently inventive. It doesn’t have a ton of resources. Top-end estimates for its budget are about $500,000. There are some terrible special effects, some obviously sped-up film (to make the cars look faster), and a general smallness of population. But for this kind of movie, it’s got an expansive sense of geography and convincing action scenes. It ‘s impossible not to notice that Rollerball had 10 times the budget at a minimum, possibly closer to 20 times, and produced a lesser film.

Death Race 2000 was remade in 2008 as Death Race, and followed by three sequels. A sequel to the original, Death Race 2050, was produced by Corman in 2017. It’s not bad, more re-imagining than sequel, but is self-consciously cheap in a way the original isn’t. The camp aspect takes over the movie, and there isn’t quite the same sense of anarchy. The violence doesn’t land with the same surprise; it’s too easy to transgress today. Death Race 2000 is a movie of its time, but that’s what makes it fun to watch.