The Hunt, released after a seven-month delay, isn’t the Molotov cocktail some assumed. C- 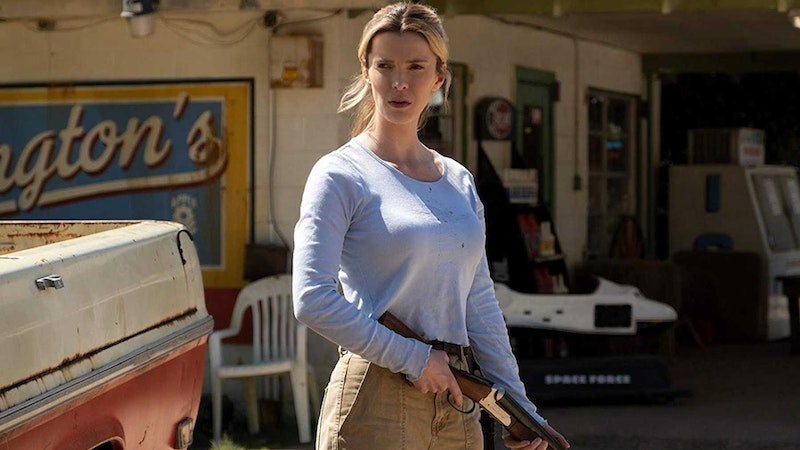 Fascism may well prevail, but The Hunt has been released! Finally all of America and the rest of the shitty, foreign, sick world can see “deplorables” fight back against impossibly arrogant and ultimately feckless LINOs in a death cult. Donald Trump is never mentioned in The Hunt, but the film’s trailer made it clear what this movie was about: liberal elites hunting MAGAmericans for sport. After a doubleheader of mass shootings in Dayton and El Paso last August, and some critical remarks from the President, Universal shelved the movie indefinitely. Really, it wasn’t that tin-eared, nothing like 20th Century Fox’s Let’s Be Cops, released four days after Darren Wilson murdered Michael Brown in Ferguson. (Or, even worse, Katrina and the Waves announcing a reunion tour in August 2005…)

The Hunt, directed by Craig Zobel and written by Nick Cuse and Damon Lindelof, isn’t that provocative next to Joker or anything else released by Blumhouse Studios. There are far more violent films and cutting political critiques. The Hunt was a victim, and now a benefactor, of bad timing. But unlike other recently cancelled films—Woody Allen’s A Rainy Day in New York, released everywhere but North America and the U.K. and better than his last two, Louis C.K.’s I Love You, Daddy survives only on torrents, or Gore, an unreleased Gore Vidal movie starring Kevin Spacey and Michael Stuhlbarg—The Hunt doesn’t have much to say about America that hasn’t been exhausted in the last four years. Liberals are arrogant, hypocritical, and cruel; conservatives are poor, dirty, and uneducated. Naturally the villains (including Glenn Howerton of It’s Always Sunny in Philadelphia) are all ninnies and eunuchs who evaporate under pressure, like when the heroine Crystal (Betty Gilpin) finally makes it to their compound and slaughters them all.

Dick Cheney shot his “friend” in the face while quail hunting in 2006. One detail that stuck with me from that story was the kind of “hunting” they were doing: these were not wild quail. Cheney and company were not frontiersmen. The quail were brought to the woods in a cage and then released mere yards away from their executioners. Where’s the fun in that? The Hunt echoes that infamous blast, in the wanton irresponsibility and violence of the elites and the escape of their prey.

Ike Barinholtz is the only real “name” in The Hunt, and he’s killed off quickly with hardly any characterization. We’re put off of our feet a bit, waiting to see who survives long enough to become our protagonist. Gilpin really is great here, easily the most compelling part of the movie. Unflappable, funny, and tough, she could carry any action or adventure movie. (Per my mom, “She has beautiful breasts. I saw them on Nurse Jackie.”)

We follow Gilpin across Arkansas before we find out these “deplorables” have been drugged and smuggled into Eastern Europe. Like Scarlet Diva, and the more recent Honey Boy, I’m sure there are some hints in this film that will become glaringly obvious in a few years. Hillary Swank shows up at the end as the evil mastermind, and her reveal is nicely done, but as the camera was revolving to reveal her face, for a second I could’ve sworn it was Lindsay Lohan. That would’ve been a great reveal, on par with Henry Fonda’s debut in Once Upon a Time in the West. But Lohan is busy in Saudi Arabia, so we have Swank. She and Gilpin have a nice Kill Bill inspired kitchen fight that leaves them both gravely wounded, and just before she dies, Swank explains some part of her retarded plan involving a pig named after George Orwell. Swank, assuming Gilpin has never read or even heard of Animal Farm, explains the “literary reference” that a seventh-grader could make.

Gilpin corrects Swank’s interpretation, correctly arguing that the pig was the only virtuous character in the story. Swank is aghast: “You’ve read Animal Farm?” It’s a good joke, and more subtle than most of The Hunt. It’s a good movie, but nothing like the Molotov cocktail that was Joker. The “cancellation” of The Hunt was the best thing that could’ve happened to it, because now, even in the midst of a pandemic, the movie will see release only seven months late. It isn’t the anti-liberal bomb some wanted it to be, or a slight on Trump as the President himself assumed. It’s a fine movie with some good political jokes, but this is a Blumhouse picture, so there’s a lot more blood and guts than jokes or political commentary.

The Hunt is a perfect comedy for these times, a distraction with cutting critique circa 2016. That’s still more than most movies like this have to offer.