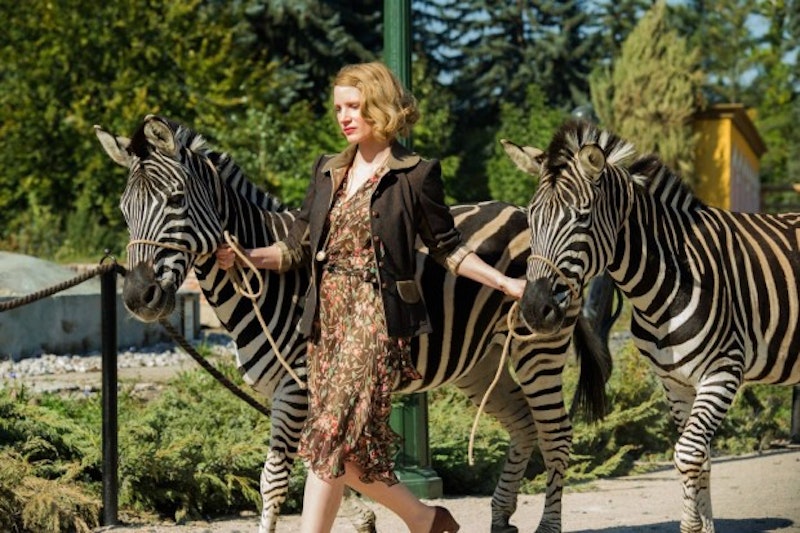 The Zookeeper’s Wife is an earnest, inoffensive examination of heroism in the Holocaust that’s haunted at nearly every turn by a considerably better film, Schindler’s List. It’s not bad—it just feels like Spielberg’s film, only running at about 40 percent capacity.

Directed by Whale Rider’s Niki Caro and based on a book of the same name by Diane Ackerman, The Zookeeper’s Wife—not to be confused with a certain notorious episode of The Howard Stern Show—tells the story of the family, owners of a zoo near the Warsaw Ghetto, who hid a small group of Jews in the zoo’s basement for several years.

Jessica Chastain stars as Antonia, the wife of zoologist Dr. Jan Żabiński (Johan Heldenbergh), who run the Warsaw Zoo. Following the German occupation, the couple hides a disparate group of Polish Jews in their basement, despite numerous close calls. Much like Schindler’s List, The Zookeeper’s Wife is a dramatization, based on a book, of a true story of righteous gentiles using a business to shield Jews from certain death in Nazi-occupied Poland. There’s a lot of tragedy, some shocking brutality, and it ends on an unlikely note of hope and triumph. There are times when this combination, in Caro's hands, is quite affecting.

The one thing it does have that Schindler’s didn’t? A lot of executions of zoo animals—which shocked the preview audience I saw the film with, some of them apparently unaware that the Nazis killed a lot more than just animals. (It occurred to me, at some point during the film, that I was sort of hoping for an Inglorious Basterds-style revisionist twist ending, with the animals themselves rising up to kill Hitler and his men.)

Instead of bribing Hitler’s men like Schindler did, Antonia engages in a mock flirtation with a mustache-twirling Nazi bureaucrat (Daniel Bruhl), with plans to use the site for eugenic animal experiments. And that’s the problem here—the film is full of inferior versions of just about every major element of Schindler’s List. While Chastain gives it her all, Antonia isn’t anywhere close to the conflicted, complex protagonist that was Liam Neeson’s Oskar Schindler. The scale is smaller, too—one of the more poignant aspects of the Schindler story was that the shindlerjuden amounted to over 1,000 people, and their descendants as many as 10,000. And while Ralph Fiennes’ Amon Goeth was horrifying and menacing, Bruhl’s Dr. Lutz Hecht is like a cartoon character who may be loathsome, but never that scary.

Worst of all, there’s the question of ambition. Schindler’s List was an example of an accomplished filmmaker realizing this was likely the most important film he’d ever make in his career, one likely to be shown in museums and classrooms for decades, and therefore throwing every bit of talent and effort into it, to massive success. The Zookeeper’s Wife never feels like a film in that sense, or achieves any type of gravitas apart from its subject matter itself.