Blade Runner is about one thing: the plight of sweaty, physical, and passionate men in the digital and corporate age. 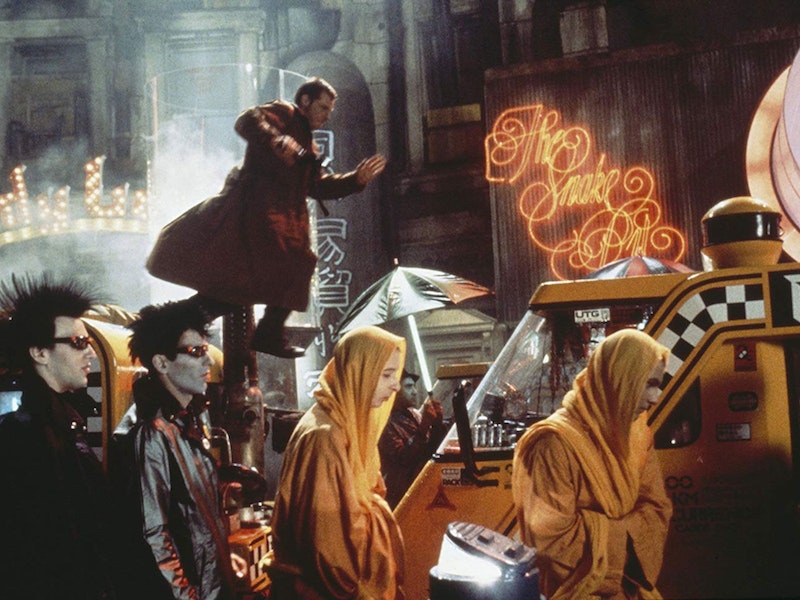 The 1982 science-fiction film Blade Runner turns 40 this year. National Review, Esquire and others are noting the anniversary, arguing that Blade Runner touches on universal themes—what makes us human, the unintended blowback of science playing God, the eternal archetype of the urban detective.

Still, to me the film is about one thing: the plight of sweaty, physical, passionate and authentic men in the digital, and corporate age. Blade Runner is a commentary on the sterilized world of Covid and MeToo, things that didn’t exist at the time of its release. It’s ironic that so many journalists are praising the film on its anniversary, as that profession is top-heavy with exactly the kind of weak, digitized and impotent men Blade Runner condemns.

Blade Runner takes place in a dystopian future, where humanoid robots, or “replicants,” were created for slave labor, military operations and pleasure. After a group of them revolted, replicants were outlawed. Bounty hunter Rick Deckard, (Harrison Ford), has the job of “retiring”—killing—the few remaining replicants. Deckard is a “blade runner.” Replicants have a four-year lifespan. They’re desperately searching for ways to extend their lives as time is running out—and Deckard hunts them down. Deckard’s biggest challenge is Roy Batty, a blond, blue-eyed replicant with a towering presence and near-superhero abilities. At the end of the film Batty, played by Rutger Hauer, only has minutes left. He defeats Deckard in a fight, but then saves Deckard’s life. As Batty lives out his final minutes, he gives a speech. It’s one of the most beautiful and chill-inducing scenes in the history of film. Sitting in the rain (which has poured through the entire film), Batty looks at Deckard and says: “I’ve seen things you people wouldn't believe… attack ships on fire off the shoulder of Orion. I watched c-beams glitter in the dark near the Tannhäuser Gate. All those moments will be lost in time, like tears in rain. Time… to… die.” Hauer has been rightly praised for his delivery of these lines, with some even claiming he steals Blade Runner from Harrison Ford in those few moments.

In Blade Runner the replicants are more fully alive than the humans, who seem anonymous in the dark, rainy future world of Los Angeles. The female replicants are strippers—funny, passionate, and artistic. The male replicants express anger, sarcasm, and wit, their faces often conveying more emotion than their creators—and this is one of the reasons why they must be retired.

As Michael Newton noted in the Guardian: “[Blade Runner] is a starkly empty film, preoccupied as it is with the thought that people themselves might be hollow. The plot depends on the notion that the replicants must be allowed to live no longer than four years, because as time passes they begin to develop raw emotions. Why emotion should be a capital offense is never sufficiently explained; but it is of a piece with the film’s investigation of a flight from feeling—what psychologist Ian D Suttie once named the ‘taboo on tenderness.’ Intimacy here is frightful (everyone appears to live alone), especially that closeness that suggests that the replicants might be indistinguishable from us.”

Re-watching Blade Runner, it’s easy to see a prediction of the digital, Covid, Me-Too and corporate world that’s now shuffling a lot of men into “retirement.” Dr. Eldon Tyrrell, the genius who created the Replicants, has thick classes and a cold demeanor, looking like the kind of guy who’d be sitting in the front row at a new Apple product unveiling. Tyrrell is, in fact, more robot than the robots he has created. In 2019, when Blade Runner takes place, citizens are just an anonymous horde, while replicants dress in a mishmash of flashy punk and New Wave styles, indicating a freedom that’s suspect in the cold world of the Tyrrell corporation. The only scene of any character creating is when Pris Stratton, a female replicant, paints a black stripe across her face. There’s only one curse word in the film, an f-bomb dropped not by Deckard, but Roy Batty.

Seen today, the replicants seem like the people left behind by iPhones, texting, the end of genuine sexual passion and the passing of the manufacturing age. In a world run by genetic manipulation and godlike corporations, Roy Batty is raw and primal, a white tiger loose in the Google corporate offices. His evolving emotion is a threat to the modern world, which prefers its sad anonymity to the dynamism of a real man. In Batty’s character, and perhaps unintentionally, Blade Runner becomes a paean to a 21st-century demographic—sweaty, poetic, and crude men who have been displaced by the digital tsunami, which is represented in the black rain the pours throughout the film. While real humans have lost the ability to feel, Batty is, as the Tyrrell Corporation motto has it, “more human than human.”

Deckard bleeds, sweats, falls in love, and puts his life on the line in pursuit of the rebel replicants. He represents bravery and genuine emotion in a world of the walking bland. However, a shock comes when the viewer realizes at the end of the film that Deckard himself is a replicant. In the age of the geek technocrat and a population of supine nerds, it was so difficult to find a raw man to confront Batty that society had to create one. This explains the line at the end of the film when, after Batty has died, a fully human police officer who has been watching Deckard appears. With a mix of admiration and sadness he tells Deckard, “You’ve done a man’s job.”

Deckard had to. No one else could.