Trekking the Wars in the Stars

Fans are often partisan about whether Star Wars or Star Trek is superior. 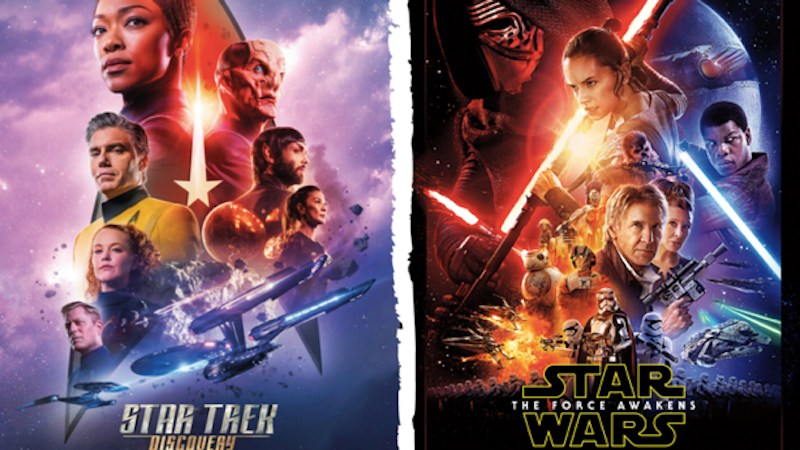 Much as there are two billionaires—Elon Musk and Jeff Bezos—funding space exploration, two cinematic franchises are creating outer space fantasies. The Star Wars franchise is now found on Disney+, and the new streaming shows—The Mandalorian, The Book of Bobba Fett, and Obi-Wan Kenobi—are there, providing origin stories and histories for the movies that are also on this platform. The Star Trek franchise is on the CBS streaming platform Paramount+, where it also has three series, Discovery, Picard, and Strange New Worlds, along with animated Star Trek spin offs and the other Star Trek series originally produced on broadcast television and the movies developed from them.

Fans are often partisan about whether Star Wars or Star Trek is superior. Together the two franchises represent half of the concentrated industry that is Syfy, the more terrestrial-focused Marvel and DC Comics franchises the others in this market. It’d be interesting if Musk or Bezos preferred either franchise, but neither is open about it. Musk said he loved both as a child. Bezos had a cameo in the 2016 movie Star Trek Beyond, and had William Shatner as a passenger on a Blue Origin flight five years later, but hasn’t compared the two franchises. The Star Wars franchise, which began in 1977, has earned $70 billion in revenues from all sources, beating out, for now, the Star Trek franchise, at $11 billion, even though the latter began at Desilu Productions in 1965.

Another billionaire’s a partisan: Peter Thiel favors Star Wars because Star Trek seems to have a non-capitalist economy. For this opinion—though no doubt more for his support of politically-incorrect candidates and ideas—Thiel was criticized in a particularly unintelligent piece in The New Yorker by Manu Saadia, who’s the author of Trekonomics. Saadia’s article is loaded with howlers. My favorite is his denigration of Star Wars as just a Western: “Although the galaxy that George Lucas created exists long ago and far away, it is in fact much closer to home than ‘Star Trek.’ Forget the lightsabers and the Force: the essential story of the films is familiar, a techified version of a Wild West that existed only in Buffalo Bill’s travelling revue and its celluloid successors, the Westerns.” But creator Gene Roddenberry pitched Star Trek to Desilu Productions as "a Wagon Train to the stars." So it’s not clear how being a “Western”—having frontiers, and villains, and guns—distinguishes Star Wars from Star Trek.

Saadia believes that “the process of capitalist accumulation” will, as Marx said, lead us to a magical post-capitalist future where Star Trek style replicators will mean humans no longer work and all our needs will be provided for. He has fun quoting the Twitter intelligentsia, the primary research resource for today’s journalists, on how Jabba the Hut is the hero of the Star Wars universe for Thiel, since only by Jabba’s being a creditor enforcing his rights on the debtor Hans Solo is the Star Wars adventure set in motion. I wonder if Saadia is experiencing any inflation or shortages today and if he even begins to fathom how his belief that production is magical might be related. I wonder if he thinks in the future anyone will need to mine or transport the rare earth minerals the replicators might use or that one might have to pay people to write the code that operates them in order to give them an incentive to not do something else with their time and imaginations.

It’s interesting that the Star Trek partisans are those attracted to magical thinking, when Star Warshas a form of magic called The Force, and a group of what are close to being witches and wizards, the Jedi. But on closer examination, it may be that the Star Trek universe is the one that’s more magical, less realistic and less grounded in nature and human nature. There are a number of other differences between the two fantasies that go far beyond capitalist and non-capitalist economics, though they may reflect other contending moralities or ideologies, and in each of them I contend that the Star Trek franchise is more fantasy and farther from human nature than is Star Wars. Perhaps this explains the bigger commercial success of Star Wars, even though Star Trek had a decade’s head start. Star Wars engages more widely-real human passions about real human problems.

Saadia was perhaps accidentally onto something by focusing on replicators. In Star Trek technology is usually smooth and clean with the finish of next year’s Apple product. Even when crew members have to crawl into the “jefferies tubes” to do repairs, things are usually well-lit and dust-free. In contrast, the androids and other gizmos of Star Wars, from C3PO up to the Millennium Falcon Hans Solo flies, are usually gritty, oil-stained, and damaged. We frequently see people—human or alien—selling parts or doing repairs and reclamation. The only technology that’s clean and shining in the Star Wars universe is that of the Empire, though unlike Apple products (or Federation technology) it tends to be a shiny black, not a shiny white. Which is the more magical universe—the one where the technology usually works perfectly and looks beautiful, or the universe where technology takes work and looks thrown together, and the magic is separate from the tech?

Star Trek technology has another magical element besides its Steve Jobs designer glamour. Star Trek has time travel. (And alternate universes.) So far no Star Wars plot line has used time travel (or the multiverse) to reset a story. But Star Trek’s heroes have travelled through time since April 6, 1967, when William Shatner went back in time to woo a young Joan Collins in “The City on the Edge of Forever.” The most recent seasons of two of the three current Star Trek shows occur entirely out of their timelines: Picard finds Jean Luc Picard and friends thrown back into contemporary San Francisco and Discovery finds its intersectional crew, complete with a finally elected Stacey Abrams (that’s real magical thinking) tossed forward from 2254 AD to 3188 AD. That’s a form of magic not available to real people trying to solve their problems.

Star Trek frequently self-consciously argues with itself and its fans that it’s notlike Lord Vader’s Empire, despite their similar fondness for shiny technology and clean orderly ships. Or even more relevant, not like its dark reflection, The Borg. It doesn’t force people to join the Federation. In fact you can’t join it and it won’t reveal itself to you, unless you first achieve faster than light travel by building a warp engine. Once you decide to join it though, as the Klingons point out, you’ll have to accept the jab. You can’t go to school or work in the Federation unless you play by its rules. If the Federation really is a state-controlled and centrally-planned economy is obedience to its rules required to get its benefits? And is outlawing any trade or intercourse with needy pre-Warp savages the only way its fiscal house can remain in order?

It probably helps then that almost all the aliens the Star Trek Federation meets are so much like people in the Federation, almost all species who stand upright, walk on land, have bilateral symmetry, can frequently interbreed with humans and other Federation members, and often have a variety of races with the exact same shades of skin pigmentations found among humans. Star Wars is messier, less humanoid-normative, with creatures of a far greater variety of sizes and body types, as depicted in the Mos Eisley Cantina. Similarly Star Wars has sentient robots that seem to have been around for centuries and hold vital roles in the economy—and the resistance—and are friends with people (even if the robots don’t seem to be free yet). Just as Star Trek socialism demands a certain uniformity from alien members of the Federation, the Federation also has an uneasy time dealing with cyborgs and robots. It has a few androids made to look like humans, but beginning with V’ger, the sentient reconstruction of Voyager by an alien robot civilization in Star Trek: The Motion Picture (1979), the Federation is uneasy with robots, from the Borg to scary (man-made and alien) artificial intelligences mankind (along with Vulcans and Romulans) has to battle or flee through time to escape. In general, Star Trek’s socialism requires a uniformity of its subjects

The state (the Federation) has partially supplanted the family in Star Trek. Children, and two-parent families (part of the uniformity is that all the races the Federation meets have two-parent reproduction), are rare in Star Trek: one crew member was accidentally impregnated by an alien in Enterprise; no children were aboard the original 1966-1969 Star Trek; Next Generation had a single mom whose teen son was Wil Wheaton; Deep Space Nine had two crew members with a baby and a captain who was a single dad to a teenage boy; Discovery has an adult woman looking for her long-lost mom.

By contrast Star Wars is loaded with family. In the original movies we learn that Luke and Princess Leia are twins and their father is Darth Vader. In the later moves Leia and Hans Solo marry and have a child. In the new Disney+ series The Mandalorian is protecting a baby Yoda, and in Obi-Wan Kenobi a Jedi is protecting a pre-teen Luke and a pre-teen Leia, and their families, while the Empire’s stealing “Force-sensitive” children from their families (and killing the families) to raise them as evil Jedi who will serve the Empire.

I expected to find survey data showing that a higher percentage of women respond to Star Wars than to Star Trek. But such information has shown that only around a fifth of women like either. At a recent book party for the libertarian-ish Star Wars fan book Can the Force Save the World? men and women were in equal attendance, and Minneapolis (Democratic) Mayor Betsy Hodges, who wrote one of the two introductions, spoke on how fleeing into the fantasy had helped her cope as a teen with sexual abuse, something that one imagines Star Trek could’ve done as well, if the franchise had been producing more stories at the time. I’ll be curious to look again in another decade and see if Star Wars doesn’t continue to earn more than Star Trek, if it continues to have less magical thinking and less dirigiste politics, and if it doesn’t attract more female fans.