Survivalist TV Has a New Sub-Genre

Snowflake Mountain is what this twentysomething generation deserves. 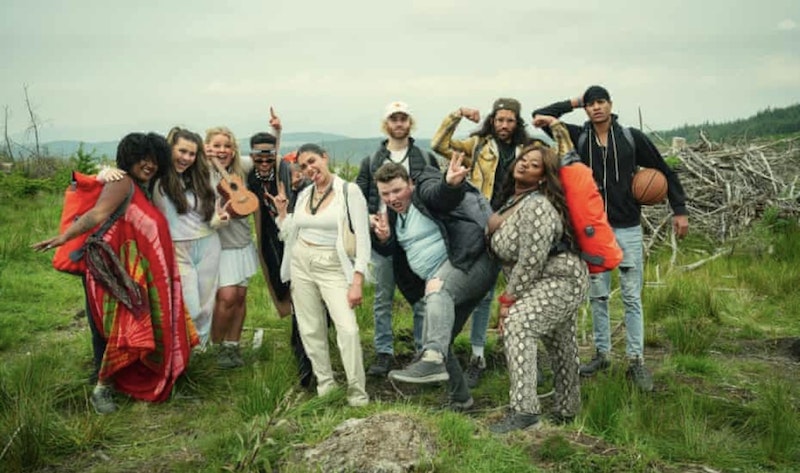 Glenn Villeneuve used to be one of the stars of Life Below Zero, a National Geographic Channel show about the challenging life above the Arctic circle in Alaska that premiered in 2013 and is still running. He's a different breed of person—the kind who’ll eat a wolf he killed in the wild. His favored preparation for that beast is to boil it for a long time, to kill the trichinosis. Villeneuve has fed wolf meat to his children on a handful of occasions when no other food was available. During the winter months, when he has no vegetables, he's been able to get some vegetables from the stomachs of the caribous he hunts. Life up in the remote parts he inhabits isn't for the picky eater, but he goes to extremes even by local standards. Villeneuve hunts caribou with an ancient native technique. He yells loudly so his voice will echo off a mountain, or some other structure, confusing the animals into turning around and charging right at him so he can shoot them.

Les Stroud is a Canadian survival expert who starred in Survivorman, a show that ran on Discovery Channel for eight years involving Stroud spending up to 10 days in harsh wilderness conditions (e.g. the Amazon jungle, the African plains, Labrador in winter, a tropical island) which he enters with little or no food, water, or any other basics of survival—not even a tarp or sleeping bag. He always brings a harmonica and a video camera, because he's alone and films the show by himself, which adds an extra level of physical strain. Stroud isn’t a man who allows fear to deter him from accomplishing his impossible-seeming goals. He's been chased by a jaguar, nearly died from heatstroke, and spent a sleepless night among lions in the African plains, which he said was the scariest experience he ever faced on Survivorman.

Martin Colvill, who's prepping for the post-apocalypse life brought on by a world economic collapse, is featured in an early episode of Doomsday Preppers, an American reality television series that aired on the National Geographic Channel from 2011 to 2014. He's joined by a diverse cast of characters, each of them fearing their own version of Armageddon, and all determined not to end up like the unnamed man and his son in Cormac McCarthy's novel, The Road, suffering from cold, exposure, and frequent starvation as they wander around searching abandoned buildings for food after an apocalyptic event has left everything dead and burnt, and the sun blotted out by ash. There's James Patrick Douglas, who shows off the many homestead techniques he's perfected due to his fear of overpopulation. Colorado computer programmer Preston White has collected over 11,200 types of seeds in planning for biosphere-living in a radiated future. Bruce Beach, a lifelong prepper, is focused upon nuclear wars and saving children in his 42 underground buses. If nothing else, these people are, while being a bit kooky, fully-committed and hard-working.

I break these survival shows into three main sub-categories. Those that deal with permanent life in extreme conditions (e.g. Life Below Zero), those that depict manufactured, temporary survival situations in which food and water is often unavailable for long stretches (Survivorman), and the prepper shows about those who mostly live in normal conditions now, but who spend many hours per week and big bucks making sure they'll be self-reliant when everything most people take for granted crumbles.

Now Netflix has introduced a fourth sub-genre. Snowflake Mountain, of arguable value but an inevitability, is a reality show that features a crew of twentysomethings—the "snowflakes," all of them layabouts—with no interest in ensuring their own survival. They're taken out into the middle of nowhere, where they're forced to do unthinkable things like dig a latrine and use an outhouse.

And what a cast they are. Devon "parties 24/7" in NYC. Rae doesn't "take life seriously, one bit." Liam says, "When it comes to cleaning, not for me, hon." Deandra got fired from her first three jobs. "King Solomon," as he calls himself, is a self-described "superstar" with no visible means of support. "I do pamper myself," he says. "I like to get weekly facials and lay in bed and watch Real Housewives." Sunny, who describes himself as a "naturally lazy person," sleeps till noon every day. All of these precious parasites have something in common: they still live with their parents, who're desperate to get them out on their own. So they've handed their shiftless progeny over to the producers of Snowflake Mountain, who've hired two survival experts—Matt and Joel—to give them a taste of the real world, a place where there's no partying and sleeping in.

Supposedly, the sneaky parents have tricked these kids into thinking they're going to a luxury resort high atop a mountain, so when they get up on that mountain and find out the truth, their spirits appear to be crushed, or at least that's the way they act. But the $50,000 dangled in front of them when they arrive at that mountaintop as the prize of outlasting their fellow snowflakes in a series of outdoor challenges Matt and Joel have devised for them keeps them hanging in there.

Snowflake Mountain has a staged feeling, and there's not a likeable character in the cast, although some are much less unlikeable than others. They're all displaying their warts on camera without shame to gain more social media followers, which is their only path to any sort of self-sufficiency. So it's not a bad strategy, all things considered.

Glenn Villeneuve sometimes wakes up in the wild to a temperature of -37°F. Les Stroud has eaten rats and maggots to survive. Every single prepper on Doomsday Prepper is working hard so they'll be dependent on no one when the devastation occurs. And then you have Randy, a 23-year-old snowflake from Florida who, when asked to walk to the top of a hill said, "Are you kidding me? I hate walking. I try to avoid it at all costs. I don't know if I've ever walked up a hill before."

Take your pick from these survivalist shows. You'll learn plenty about survivalism and what the real priorities of life boil down to with the legitimate ones, but one thing this bastardized version of the genre will give you is a few cheap laughs. Urban spoiled brats trying to fend for themselves for the first time in any setting can be amusing, at least for a couple of episodes.