Both Sides of the Blade is a modest but well-done film, featuring another bravado performance from Juliette Binoche. 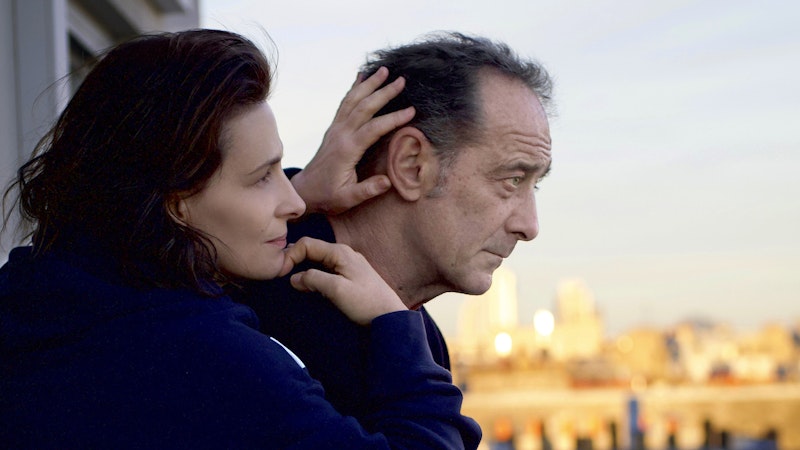 Their latest re-teaming with the director, Both Sides of the Blade, is more conventional, at least plot-wise, as Binoche's character finds herself in a love triangle with two men. But as love triangles go, it's a particularly French one. The film debuted in February at the Berlin International Film Festival, and Denis won the "Silver Bear" for Best Director.

Known as Fire in some of its festival showings, and carrying the French title Avec amour et acharnement, Both Sides of the Blade was co-written by Denis and Christine Angot, who previously collaborated on Let the Sunshine In, and it's an adaptation of Angot's novel. Both Sides of the Blade may have a familiar plot, but strong acting from all three leads and high levels of intensity drive it over the finish line. Binoche plays Sara, who’s been in a relationship for about a decade with Jean (Vincent Lindon), so great in last year's Titane. Sara hosts a radio show, while Jean is a retired rugby player and an ex-con, with a son from a previous relationship (Issa Perica), who lives with Jean's mother (Denis veteran Bulle Ogier.)

They're introduced swimming together and appearing very much in love, but one day she stumbles upon her long-ago lover Francois (Gregoire Colin), it stirs up old feelings—to the point where she's visibly swooning anytime she's near him. This complicates things, especially since the two men have a great deal of history together as well, and are now talking about starting a sports agency together. Things get very intense, very fast, leading to complications among all three characters. We're meant to wonder how this will end up—in violence? Some other way? The climactic scene between Binoche and Lindon is one of the better-acted scenes of any movie this year.

Claire Denis is 76 years old, one of many top directors who continue to do quality work well into their 70s and 80s. Both Sides of the Blade isn't as inventive or ambitious as, say, High Life, but it's a well-done film, featuring another fearless performance from Juliette Binoche.