The chilling Technicolor terror of the classic 1945 melodrama Leave Her to Heaven. 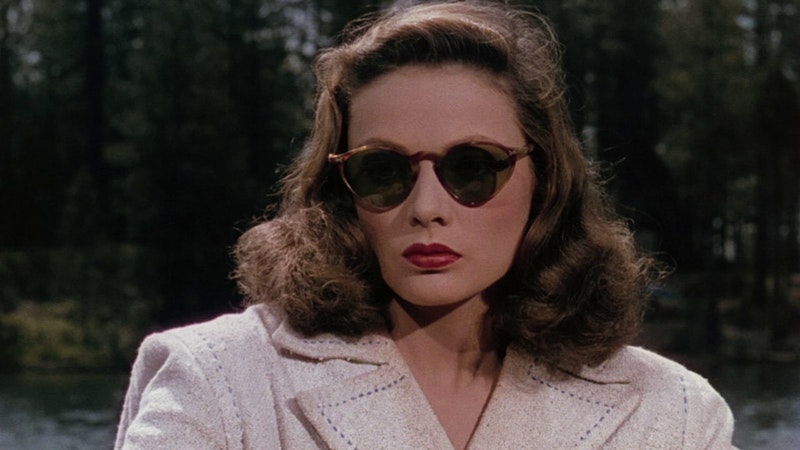 It’s said “hell hath no fury like a woman scorned” but what about a woman who embodies an obsessive desire for absolute, possessive love? The rage, the fury, and the calculating emotions are all part of John M. Stahl’s 1945 film, Leave Her to Heaven. Although it has many film noir qualities, Leave Her to Heaven is primarily a psychological study of obsession and possession, in which one man’s life is nearly destroyed by one woman’s misunderstanding of what love truly is.

Novelist Richard Harland (Cornel Wilde) is traveling to New Mexico on a train where he meets Ellen Berent (Gene Tierney), who happens to be reading his latest novel. Unbeknownst to either of them, they’re heading to the same place: a supposedly relaxing stay at the mutual friend's house. Ellen’s taken by Richard. She’s attracted to him because he bears a resemblance to her father. This has a psychoanalytic tinge, especially after Richard returns the affection but assures Ellen that it’s not because she reminds him of his mother.

This relationship is complicated from the beginning. Ellen’s immediately controlling but the phase of infatuation proves to be an impediment to Richard’s understanding of who she really is underneath the icy beauty. Her own family—mother and cousin/sister—know very well the emotional distance Ellen’s capable of. She always gets what she wants.

The supposed relaxation at the friend’s ranch turns out to be a deception. Ellen, her mother, and sister are really there to scatter the ashes of Ellen’s dead father. Ellen has already made up her mind that she’ll marry Richard. In fact, she invites Russell Quinton (Vincent Price) to the ranch to inform him (read: humiliate him) that their engagement is off. She’s marrying Richard. Everyone is surprised by this, including Richard, yet he lets himself be taken into the dark waters of Ellen’s mind.

Richard’s intrigue and an inability to reject Ellen’s strangeness is especially palpable at the beginning. From a close distance, he watches Ellen scatter her father’s ashes in the New Mexico desert. This isn’t a moment of sacredness, dignity, or memory. Ellen’s mother and sister aren’t included in this ritual. Much like Richard, they too observe Ellen but have no power over the event. Ellen’s in full control. As the great musical score of Alfred Newman plays, she rides the horse and spreads the ashes like a queen (but really an emotional dictator) and the observers are her royal subjects. It would appear that even in his death, Ellen controls her father.

Richard knows that there’s something strange about this woman, yet he can’t help but be in her presence. Once they marry, they go to Richard’s lodge, called “Back of the Moon.” Ellen wants to be alone with him, and this includes getting rid of his younger, crippled brother, Danny. She must have Richard to herself.

On one hand, Ellen’s desire to be with her husband alone is understandable. Danny is slightly annoying because of his false sunny disposition (typical especially of the 1940s and 1950s films), who’s too attached to his older brother. But this desire isn’t borne out of love that freely gives and receives but a need to possess every last bit of Richard’s being. The moment of pure evil arrives when Ellen lets Danny drown in the lake next to the lodge.

Tierney brings minimalist intensity to the scene. As Danny’s calling for help, Ellen sits on the boat in complete silence. Her face shows no empathy, only icy indifference. The knowledge that Danny’s drowning and the choice to do nothing about it is worse than if she actually murdered him. She’s at once an evil ghost and an enfleshed femme fatale, and the only warmth is her deep, red lipstick. But the red lipstick is yet another element of her destructive narcissism. She’s above it all and indifference to empathy is her primary mode of being.

Although Richard suspects Ellen’s guilt, he maintains the relationship. Ellen’s suspicious of everything that Richard does which doesn’t include her. Every encounter he has with others (especially her sister Ruth) is observed with cold precision and an intent to find something nefarious about it. Ellen appears to control everything and everyone but she’s in a prison of her own.

What kind of evil is this? By today’s standards, would we say that Ellen is mentally ill? Does she suffer from some kind of psychosis? Or is her moral character non-existent and she is “simply” evil? It’s difficult to have any compassion for Ellen, especially for the evil deeds she commits later in the film. She’s a portrait of a woman incapable of love, despite the fact that her mother says that there’s nothing wrong with Ellen, “she just loves too much.”

At the core, Ellen is a spoiled child, who needs to get her way all the time. She’s above law,  morality, and even love because she re-defines the very notion of love. Her luminous beauty quickly turns to ugliness because she perverts beauty as well. Everything is remade in Ellen’s image.