Breakfast at Tiffany's is sexworkersploitation. 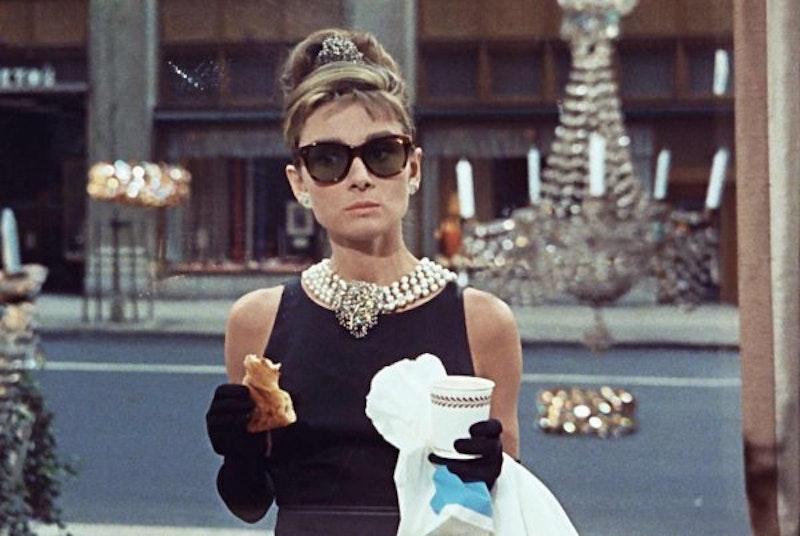 This is the first in a series of posts on 1960s comedies.

The sex workers in Breakfast at Tiffany's (1961) aren't exactly prostitutes. Rather, they're both involved in various forms of sugaring. Paul Varjak (a young George Peppard) is a semi-successful writer and the kept man of wealthy, married matron Emily Eustace Failenson (Patricia Neal.) Holly Golightly (Audrey Hepburn) lets men take her out and shower her with gifts as she tries to find some wealthy guy to marry. The two are neighbors in the same building, and the meandering plot involves them falling slowly in love, despite the trauma such a love affair will wreak on their income streams.

Like Pretty Woman, Breakfast at Tiffany's trades on the decadent charge of its protagonists' professions. Holly is constantly upbraided for ringing his doorbell when she's lost her keys by her Japanese neighbor, played with inserted buck teeth and hideous racism by a Mickey Rooney in yellow face. The uptight, asexual foreigner trips, stumbles, gibbers, and shakes his fist as Holly comes home late again, or throws wild raucous parties.

Sex work is exciting and interesting, in part because it upends expectations and presuppositions. At her party Holly smokes a cigarette through a ludicrously long cigarette holder—a winking phallic symbol that accidentally sets a woman's hat on fire. Another woman at the party jokingly says her name is "Irving." Truman Capote, who wrote the novel that the film is based on, was gay, and some of the female characters in the book (like Emily) are probably based on men, or supposed to be read by gay readers or viewers as being possibly men. The film’s aware of a range of sexual possibilities and relationships; like Holly, it’s not tied down to the usual 1950s domesticity. That's part of its charm and its excitement.

The friendship with Holly, though, eventually gives Paul masculinity, in multiple respects. She inspires him to start writing again, which gives him an income and allows him to get out from under the thumb (and other bits) of Emily. In fact, that first story is about Holly, written without her permission. As a writer he captures and delineates her in order to empower himself. It's after he gets his first check for a short story that Paul and Holly sleep together, and he starts pursuing her in earnest.

Sex work disconnects Paul from his manliness. It also disconnects Holly from her femininity. Her mercenary focus on turning sex and relationships into money means that she has to forswear love and romance. When she was 14, she married a farmer to provide for herself and her brother. She later annulled the marriage and changed her name, which the film presents as a kind of betrayal of her past, and of her loving older husband Doc (Buddy Ebsen). The film repeatedly refers to Holly as fake, in part because she has changed her name from "Lulla Mae," but also because she isn't behaving as a woman should. Holly’s so committed to her independence and freedom, and so afraid of commitment, that she won't even name her cat, who she just calls "cat." The climactic crisis of the film occurs when she tosses that cat out of a cab into the rain-soaked New York streets, insisting that she won't own anything, and that no one will own her.

The cat is eventually rescued, and we're supposed to forgive her for the animal cruelty. Paul insists that he owns her because he loves her, and rather than punching him in the snoot she abandons her quest for wealth in order to fit herself into the foreordained happy ending as the tamed wild thing. The successful resolution involves everyone being returned to their proscribed gender roles. Paul’s no longer the owned, but the owner. Holly is no longer free, but is instead the owned. The film condemns sex work on the grounds that sex work requires an attitude towards relationships that's insufficiently transactional. To be a real woman, Holly must stop selling her time, and start selling her whole self—and for a much less exorbitant price.

Breakfast at Tiffany's is essentially sexworksploitation. It trades on the charge of sex work, while denying its prurient investment through insistent moralizing. Pretty Woman, to its credit, never suggests its protagonist is broken because she's a sex worker; she's in need of money, not of spiritual rejuvenation. In Breakfast at Tiffany's, in contrast, selling sex is a problem because it frees women and imprisons men. You can only have true happiness when men are liberated, and women aren't.