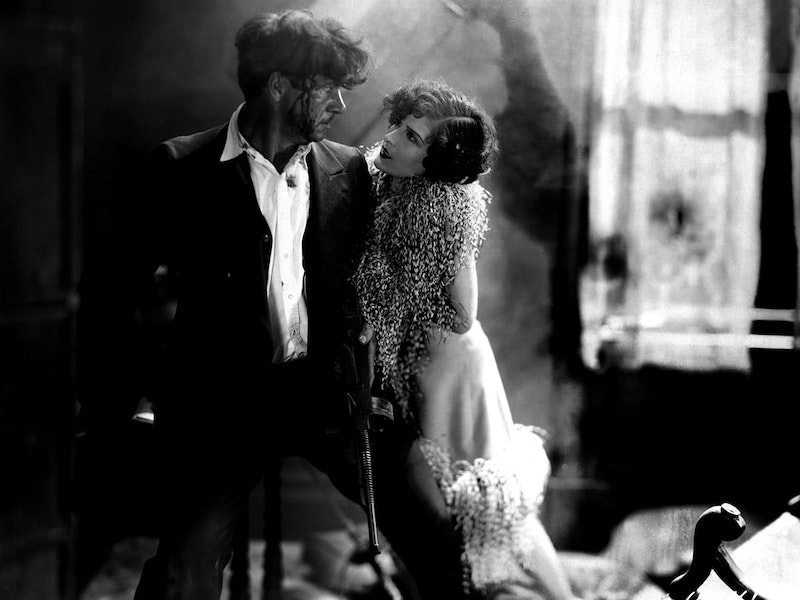 Underworld was a huge success at the box office. Crowds lined up at the theater, midnight showings were added to satisfy the thirst people had for the film. In his autobiography, von Sternberg described the film as “an experiment in photographic violence and montage.” It’s not surprising that the people liked the film. It involves action, a love triangle, murder, sacrifice, and the elusive qualities of friendship. Perhaps unintentionally, von Sternberg gave birth to the gangster film genre through the development of Underworld’s characters.

George Bancroft plays a gangster named Bull Weed, a man with an over-the-top personality, who loves a good laugh, who’s brutal, yet strangely generous. It’s tough to hate him because there’s something child-like about him. Like most archetypal gangsters, he can be kind, yet he’s stunted in his development. A gangster, by nature, is unsure of himself. The overabundance of the caricature masculinity only adds to the vagueness of a gangster’s existence.

As the film opens, Bull Weed’s robbing a bank, and by accident the robbery is witnessed by a drunkard (Clive Brook). The tramp turns out to be intelligent, possibly a lawyer in his past, but who has descended into despair. Bull Weed’s worried that the drunkard will give him away to the police but he’s assured that won’t happen. Bull Weed nicknames him Rolls Royce on the account that he’s trustworthy. This is where their friendship begins.

Enter Feathers McCoy (Evelyn Brent), Bull Weed’s girl because after all, what kind of gangster doesn’t have a woman by his side? She’s beautiful and playful, and embodies the independence of the flapper. She’s immediately attracted to Rolls Royce when she meets him, and the feeling is mutual. Finding themselves alone because Bull Weed left to rob a jewelry shop, Rolls Royce and Feathers engage in a dance made up entirely of glances and body language. Von Sternberg is a master at creating expressionistic eroticism (which will reach a full bloom in his collaborations with Marlene Dietrich), and most of the attraction between Rolls Royce and Feathers is conveyed through their refusal to betray Bull Weed. “We owe him everything,” says Rolls Royce, and Feathers knows this. Once again, Rolls Royce is the voice of reason, a man who sets aside his passion in order to save the friendship.

Things intensify at the gangster’s ball. It’s a strange and dream-like event where all the gangsters come together and have a grand time, without killing each other. Much like in Dishonored (1931) and The Devil is a Woman (1935), von Sternberg creates an other-worldly atmosphere during the ball. Confetti and crepe strings are like an unbearable snowstorm that the party-goers have to navigate through in order to have a good time.

The moment of moral tension comes at the moment when Bull Weed’s archenemy Buck Mulligan (Fred Kohler) assaults Feathers as retribution because Bull Weed framed him for one of his robberies. In a fit of both rage and justice, Bull Weed shoots Buck Mulligan and is sentenced to death. This could’ve been the exit that Rolls Royce and Feathers looked for but their love and loyalty for Bull Weed supersedes their passion for each other. In those last moments of the film, it is Bull Weed who’s most changed as he morphs into a contemplative gangster whose life was finally fulfilled. He’s not afraid of death.

Von Sternberg’s films are places of “somewhere,” “everywhere,” and “nowhere,” because he creates worlds of dreams and nightmares that aren’t grounded in embodied reality but in erotic geography. Underworld is no exception and is a perfect example that even before Marlene Dietrich came into his life, von Sternberg had a vision of cinematic eros. One of the most interesting scenes in the film is the gangsters’ ball. The chaos is completely organized, and the nameless gangsters become embodied people that represent nightmarish absurdity. In a series of strobe light-like images, von Sternberg bombards the viewer with faces. As if part of some gangster circus show, we see dominating faces, one after another, a distorted mirror into the rotten souls of the people. It’s both abstract, yet grounded in cinema’s boundaries.