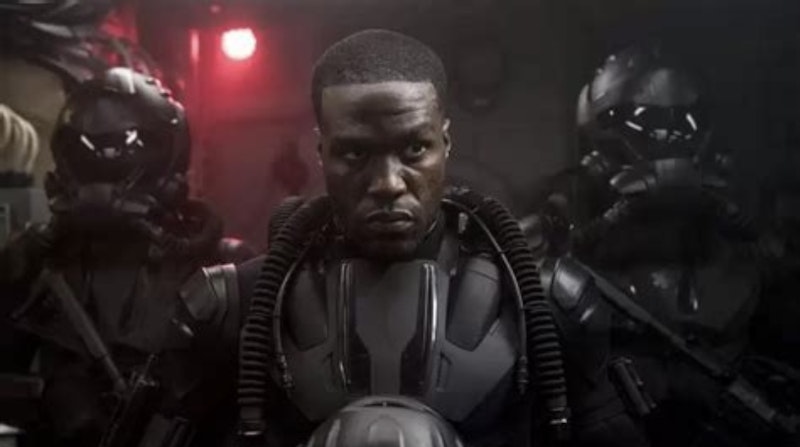 It’s a safe bet there’s some weird twist to the new Matrix sequel reaching theaters in two and a half weeks, I mean beyond the whole universe being a computer simulation. The apparent young-Morpheus figure is wearing purple and green, for one thing, and Unbreakable taught us those are the distinctive colors of comic book supervillainy, as Matrix Resurrections writer/director Lana Wachowski surely knows. Don’t be surprised if this version of Morpheus decides it’s time to rebel against the One.

Plainly, these will not be exactly the same versions of the characters we’ve seen before—but what are they? After agreeing to a truce with humanity, have the Machines simply rebooted the whole prison-like system? Will it be a world in which the One and Trinity no longer play decisive savior roles? Or will they be even more bound together than before, perhaps fusing into a single, more androgynous being—who I suppose ought logically/mathematically to be called Binary? That name would send some interesting mixed signals, if trans Lana dared.

In any case, the film has some aesthetic obligation to address its own lofty philosophical and cultural status. Unself-conscious gunfights and car chases alone won’t cut it, and we deserve better than more pretentious gobbledygook from the Architect.

The use of literal blue pills in the trailer as Neo’s means of medicating himself into forgetting he’s in a matrix is a nice touch. Maybe the film will get no closer to metafiction than that, though. Recall that the Wachowskis made the film adaptation of Cloud Atlas, and it completely abandoned the novel’s layered metafiction, its central conceit, in favor of a long but conventional historical timeline, albeit one with hints of reincarnation in it.

Even if we’re only getting a basic, one-level matrix in this one, not some mind-blowing attempt to redefine a layered reality, it’d be nice to see the film toss in a joking nod to one real-world cultural development of the past two decades caused by the Matrix films themselves: constant use of “pill” metaphors for heightened awareness. As with leftists of the hippie era and their “consciousness-raising”or for that matter the philosophies of the 18th-century “Enlightenment,” though, different people have different ideas of what constitutes heightened awareness.

Eighteen years ago, media studies professor Read Schuchardt kicked off the volume Taking the Red Pill with an essay called “What Is the Matrix?” that implied that real liberation, whether the Wachowskis realize it or not, would entail rejecting materialism and Gnosticism (and an un-resurrected messiah figure or two, who perhaps will rise after all in the new Matrix Resurrections) in favor of true spirituality.

After two decades of young males itching to duke it out in the matrix as viciously as they would in, well, a Fight Club (the latter desire kindled by cinema the same year as the former), though, “red pill” has gradually become almost synonymous with turning to the cantankerous political right—or at least to conspiracy theory of the kind that leads to concluding Jeffrey Epstein and Ghislaine Maxwell were part of a far larger elite network.

That paranoid version of the “red pill” metaphor is used explicitly in the opening lines of the trailer for the new film The Scary of Sixty-First by Dasha Nekrasova a.k.a. Sailor Socialist, cohost of the Red Scare podcast—no right-winger but perhaps made a bit more inclined to believe in sinister international networks, possibly even the homicidal criminality of the Clintons, by her own (apparently happy) migration at a very young age from tyrannical Belarus to sleazy Las Vegas, as it happens home to, among other things, an underground fight club that recently claimed the life of a UNLV student.

Meanwhile, Ukraine-born, New York-raised, now Texas-dwelling anarchist Michael Malice plans a book counseling the “white pill” of optimism as a necessary complement to the often grim right-wing/anti-media red pill and complacent establishment blue. To be sure, if you derive delight from, for example, watching right and left fight over who flew on Epstein’s plane more often, Bill Clinton or Donald Trump, our reality currently gives you plenty of reason for optimism.

I’m easily pleased. I’d be happy if the new Matrix movie just acknowledged that the “pill” metaphor is older than the Matrix movies, derived, like several weird things about contemporary pop culture, from the trippy, reality-questioning work of sci-fi author Philip K. Dick. If you don’t believe me, watch Arnold Schwarzenegger get offered almost verbatim the same choice about whether to take the red pill back in the 1990 Dick adaptation Total Recall. Woah! How deep does this rabbit hole go?

But if Matrix Resurrections doesn’t live up to its responsibility to blow our minds, this month also brings Spider-Man: No Way Home, with its own glitchy reality—reality glitches being evocative of déjà vu in the Matrix movies but perhaps now also a reminder for audiences of the “Mandela Effect” touted by some online conspiracy theorists: a malleable and unsettled quality to history, as if the past were manipulated by godlike programmers or time travelers (or as if the conspiracy theorists are very stubborn people who did badly in history class). This Spidey outing reportedly features at least three different actors’ versions of Spider-Man from the past two decades, plus their assorted villains—explained in this case not by a matrix but by the “multiverse” (as opposed to single universe) of Marvel, the magic of Dr. Strange, and maybe by the time it’s over the media-manipulation of Spidey’s hologram-projecting and tabloid-baiting foe Mysterio.

Whoever wins, and whichever rationale(s) is/are hereafter used to excuse making fictional worlds as fluid and manipulable as fiction itself, reality is due for a severe beating on the big screen this month, and, disturbingly, that feels very realistic these days.