Two recent horror films: one kicking (Knocking), one dead on arrival (You Should Have Left). 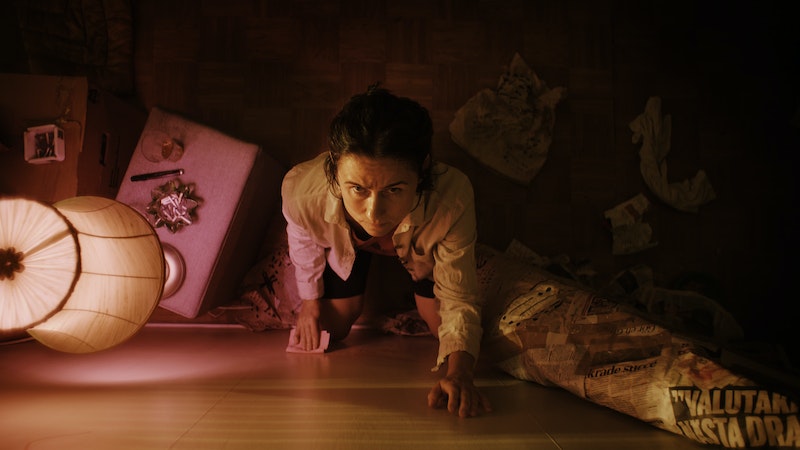 I wonder what the next horror trend will look like. I hope it’s bright, bloody, fun, and catchy—everything Edgar Wright’s Last Night in Soho was supposed to be. Giallo in name only, a tedious and uninspired bore. Some nice shots, but even those were sparse. Why? Baby Driver was good—I never understood the number of people who hated that movie—and it kept going at a clip. Too many movies are bogged down because they want to look “serious” or “important.” As always, a couple of sleeper hits like Hereditary, Get Out, and The Witch set the agenda for the next half decade of genre cinema.

Trauma is still in, and I hope it’s on its way out soon. Ari Aster’s Hereditary was a bone-chilling feature-length debut, and he proved he can mix dread with slapstick in Midsommar, but he’s just one man. Ditto Robert Eggers, whose 2019 The Lighthouse was much better than The Witch, but only the latter dealt with family turmoil and trauma. This trend didn’t start with them, but along with It Follows and The Babadook, “respectable horror” has been about screwed-up kids, screwed-up parents, disastrous family situations. This is a trend that has spread all over the world, with an example this year from Sweden: Knocking, directed by Frida Kempff and written by Emma Broström from a story by Johan Theorin. Cecilia Milocco plays Molly, a grieving widow depressed and shut in at her apartment. One night she starts hearing knocking from upstairs—someone is being murdered.

Molly’s wife drowned when they were together at the beach—Molly was taking a nap when she went out swimming and never came back. The flashbacks are limited, and as with the rest of the film, they’re shot direct and clean, with bare minimum exposition. We never see her wife’s body, for example: the overhead camera just keeps moving out and out further into the ocean. Molly can’t forgive herself for napping, and she starts hearing the knocking. Naturally, when she tries to do something, everyone thinks she’s crazy, and you can’t blame them, and it’s only at the end that her paranoia is validated via voiceover of a cop finding a chained woman in the super’s apartment. We hear all of this as the camera descends onto Molly’s face, barely alive after surviving a fire and being treated by paramedics.

Kempff’s film is beautiful and vibrant, with superb work by cinematographer Hannes Krantz. The film uses a lot of “crawling shots”: the camera slowly moves along a wall, the floor, above a character, moving down to them. Even the handheld material works, as almost all of Knocking is from Molly’s perspective, although the grieving widow setup is a cliché and all of the material dealing with it (except for the last beach scene) is prefab. Knocking is a step above other similar contemporary horror films because it’s lit well and full of warm colors and a lighting design that goes beyond Silent Hill 2. Too many new horror movies look like they were made in a dungeon. It’s only scary if you show a dungeon for a little bit!

Speaking of dull lighting, David Koepp’s You Should Have Left is set in one of the ugliest houses I’ve ever seen in a movie, and maybe my real life. Kevin Bacon is Amanda Seyfried’s husband, and they have a young daughter named Ella (Avery Essex); Seyfried plays an actress named Susanna, and her work bothers Bacon’s Theo Conroy: sex scenes, jealousy, obvious emotional instability. They’re staying at a house in Wales for a film shoot, and the place looks like one of the levels in Doom: brick wallpaper, gray and beige everything, absolutely nothing in the house, and worst of all, everything is brightly, evenly lit. Nothing dramatic can happen in here.

Bacon, of course, is unstable, and for a good reason: his last wife killed herself with one last bath and pill binge, and although he got off, everyone thinks he did it. He was a famous banker, the movie explains, and people saw him on TV a lot. For such an accomplished screenwriter, Koepp’s work here in both roles is amateurish: flashbacks, exposition dumps, stilted dialogue delivered by otherwise good actors. I’m referring to Seyfried and Essex, not Bacon, who gives one of the worst performances I’ve seen this year. I’m surprised Koepp didn’t learn more from his frequent collaborator Brian De Palma, and even more shocked that this screenplay is such a piece of shit compared to Mission: Impossible, Snake Eyes, or even Carlito’s Way. And of course Bacon actually did let his wife die after coming home early, and he lets his wife and daughter leave so he can haunt the house on the hill with the rest of the psychos and murderers in the impossibly large basement.

Anyone can see that You Should Have Left is a dull, boring-looking movie. Knocking, while not superlative, does point to a brighter future where grim, “serious” horror doesn’t have to be shot in total darkness with a little bit of muddy brown and green in the background. Kempff’s film is an example of form supporting function, and Koepp’s a clear failure, where every element—from the production design to the lighting, to the script, to the direction, to the acting—is at odds with each other, and predictably, the movie falls apart and the spell is broken. Even if the ending of Knocking is a bit botched, the spell’s never broken, and it’s because these filmmakers worked in a way that informed the material and vice versa. A pro like Koepp should know better. Perish the thought of what De Palma thinks of his collaborator’s directorial debut.