The War with Grandpa, starring Robert De Niro and Uma Thurman, is a fantastic family comedy burned by bad distributors. 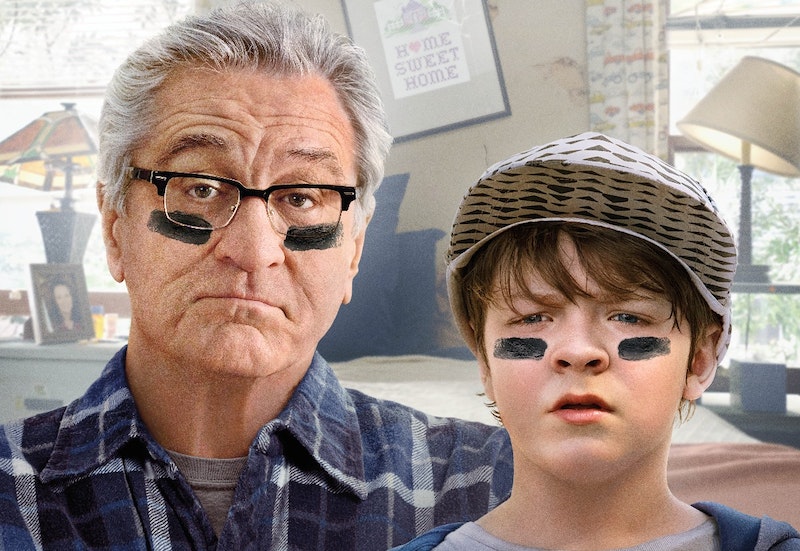 When Brian De Palma asked Robert De Niro to play Al Capone in The Untouchables, he said yes, “but it’ll cost a lot.” That was in 1987, when De Niro could milk studios, even if it was for De Palma, who discovered De Niro, gave him his first role in a movie (The Wedding Party), and introduced him to the world with Greetings and Hi, Mom! at the end of the 1960s. It didn’t take long for Paramount to fold on De Niro’s multi-million dollar demand for about two weeks of work. Although he never retired like Gene Hackman or took Marlon Brando’s long breaks, De Niro started phoning it in around the 1990s, and by the end of that decade, he had moved fully into playing variations or parodies of his past “selves”: Analyze This and Meet the Parents were the dawn of the new De Niro, the De Niro we still have: dirty paycheck grandpa.

It hasn’t all been family movies and schlock, but The Irishman is his only performance of distinction since Heat in 1995. He worked with David O. Russell in the early-2010s, but both Silver Linings Playbook and American Hustle were phoners for him. But he owes somebody money. Long gone are the days when De Niro could tell old friends, “it’ll cost a lot.” For the past decade or so, De Niro has ramped up the family movies and broad comedies, along with a chunk of completely unremarkable films like The Comedian. It seems like you can get him at a discount now. Stocking stuffer this Christmas?

The War with Grandpa is one of many family movies De Niro has made since playing the grumpy patriarch in Meet the Parents. It had a brief theatrical run last fall in (I’m assuming) about a dozen theaters scattered throughout the world, and I never would’ve checked it out if not for the insane cast: De Niro, Uma Thurman, Jane Seymour, Christopher Walken, and Cheech Marin, among others (Rob Riggle is excellent as the put-upon dad, bumbling and wide-eyed, another actor embracing his typecast, at least here). Oakes Fegley plays the kid, a sixth grader whose grandpa (De Niro) moves in with the rest of his family and takes over his room. Thurman plays his hard-nosed mom, saving most of her energy and ire for her daughter’s (Laura Marano) boyfriend.

This movie was shot nearly five years ago. The Weinstein Company were going to distribute it. After production was moved from Toronto to Georgia in the spring of 2017, its release date was bumped from April to October 2017. A tough time for a lot of people in Hollywood, and I’m sure director Tim Hill went through hell having a film sit on a shelf for three years with the stink of Weinstein. But they didn’t produce it, and although their release was completely fucked by both Harvey Weinstein’s downfall and the coronavirus pandemic, in the long run, Hill and his film have to be in better shape than Taika Waititi’s Next Goal Wins, another movie shot years ago only recently rendered radioactive by the presence of… Armie Hammer. Rest assured, neither of the Weinstein brothers appear in The War on Grandpa.

Peter (Fegley) has to move out of his room after his grandpa accidentally robs a grocery store (he walks out after getting frustrated with the self-checkout machine) and moves back in with his daughter. Sally (Thurman) is all for it: their home is much better than “a home,” and grandpa isn’t losing it, he’s just lonely and quietly miserable after the sudden death of his beloved wife. “We had a lot of plans,” he tells his granddaughter, “but things change.” Peter is not happy with having to live in the attic, and he declares war on his grandpa: a document announcing hostilities is slipped under grandpa’s door (signed “Secret Warrior”), and after realizing the kid’s for real, grandpa plays along. They set terms, “rules of engagement,” but of course things get out of hand.

I loved this movie, I think it’s the best kids movie I’ve seen as an adult, mostly because it doesn’t treat its 12-year-old protagonist like a drooling moron like all other movies starring young boys do. Not only that, this is a movie that manages to be tough and funny without ever going dirty or for gross-out gags. Tom J. Astle and Matt Ember’s screenplay, from Robert Kimmel Smith’s book, is closer to the quality of a 1930s or 1940s farce than most comedies today, major and independent, dirty and clean. The War on Grandpa is filled with so many great visual gags and set pieces—Thurman accidentally throwing hot coffee and a snake on a motorcycle cop, De Niro dropping trou (twice) in front of Riggle, exploding backpacks full of creamsicles, catapulted Santas, and at the end, the side of their house gets ripped off by a falling tree—revealing Marano and her boyfriend. Thurman only yells, “RUSSELLLLL!!!!!!!!” before chasing after the boy.

Remember, this is after the side of their house was ripped off because of a “war” that her father and son have engaged in, unbeknownst to her. The War with Grandpa is deliriously fun and deserves a second life—it even ends on a down note suggesting a sequel! Again, Peter is scheming and aggressive, but he’s not evil or twisted—he just wants his room back. It’s such a relief to see a comedy that doesn’t take itself so seriously and allows everyone involved to have fun, and you can see it: Walken gets to say “Hells yeah” after he shows off his skateboard, and Marin hits on women in the park (“Really?” both of his friends say). He meets Jane Seymour at another big box store, and she’s able to help him check out. Naturally, and happily, they become a couple by the end of the movie—but at the expense of Peter’s weekend fishing trips with his newly beloved grandpa, and that last shot of Peter staring daggers at his grandpa’s new girlfriend is startling and truer than anything I would’ve expected from a movie like this.

The War with Grandpa also succeeds in all of its jokes and set pieces around contemporary technology, whether it’s self-checkout, ride share services, or smartphones. When De Niro asks for the paper, Thurman hands him an iPad. People struggling with technology is almost always a well for hacks, but in this little family comedy, finally the sadness and frustration of those stupid self-checkout machines is communicated. This is a slapstick comedy, but you love everyone and actually become attached, like My Man Godfrey. It’s rare to see something so new and so free of pretensions and contemporary hang-ups that’s also smart, tough, and well shot. Again, the best jokes and scenes in this movie have no dialogue. All filmmakers could learn from The War with Grandpa.