Shadow in the Cloud is a bizarre, pulpy WWII movie with no bloat or bore. 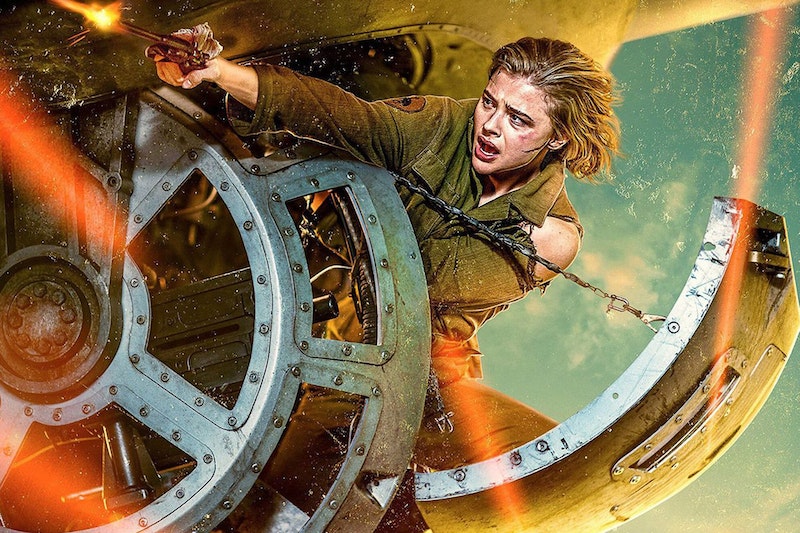 Until the next contagion shutters movie theaters for an entire year, 2020 will remain horrible and special in film history. I’ve written about plenty of it, but even at the end of 2021, I’m still going through 2020 films that were given bigger releases and seen by more people than they ever would’ve otherwise if not for the pandemic. Every movie I’ve written about this week was boosted or thwarted by the pandemic, and I can only guess that Shadow in the Cloud falls somewhere in the middle.

Directed and co-written by Roseanne Liang (with Max Landis), Shadow in the Cloud is a World War II movie I can stomach because its scope is small: this is no odyssey to free the French or a dirge towards Bergen-Belsen, nor a bloated “men on a mission” story. Almost all of it takes place on a plan, with a small cast, and some unfortunate but forgivable green screen work—watching Shadow in the Cloud, you’d think it was made as a stopgap project during the early months of the pandemic, but this movie was shot nearly two years ago. Better not stress that one; it’s better to think of this as a noble lockdown effort than a big movie with a major movie star.

Chloë Grace-Moretz stars as Maude Garrett, an American naval pilot posing as a Brit with a “top secret special package” tow; this is how she gets aboard a gunner plane headed for Samoa. Moretz is decked out in the full Dietrich: bomber jacket, perfectly coiffed blonde ‘do, and bruises and scars to back up her bravado. Maude gets on the plane and is immediately confronted with the pent-up hostility from exhausted, undersexed, and casually misogynistic for the time—not just nasty comments better fit for sailors than pilots, but they stick her in the gunner pit and eventually cut off her radio when she becomes too annoying.

Keep in mind this is after she inadvertently hears them talking about what a “hot cunt” she is, and how “her face is just made to be fucked, and fucked, and FUCKED, y’know?” This is August 1943, a mix of Americans and Brits, and while the attitudes are believable, if not tame, the dialogue often lapses into contemporary clichés (near the end, Moretz tells an impromptu crash landing pilot that, “You’ve got to shoot your shot.” Maude in the gunner pit for a good half of the movie, already short at 82 minutes, and Moretz is in every scene. She’s very good, and I’m not sure why she hasn’t quite taken off yet. Florence Pugh might’ve taken her place, just as Jean Simmons could never escape her resemblance to Audrey Hepburn.

Shadow in the Cloud begins with a newsreel cartoon about “gremlins” that are evil and are coming to get the Allies (it even runs before the film’s multiple co-producers logos appear). Moretz and the plane she boards are terrorized by a grown gremlin, and within the movie, characters talk about these gremlin comics and dismiss Moretz when she claims to have seen one on the wing. This is never explained. I’ll admit that Shadow in the Cloud is just as much of a routine girlboss showcase as Red Sparrow and Atomic Blonde, but from the start, the film makes it clear this is bubblegum. This is a Bazooka Joe-level movie. It’s quality pulp, and much better than the former two films starring Jennifer Lawrence and Scarlett Johansson, respectively. I hope Moretz gets another major role before the 10-year anniversary of the unwatchable remake of Carrie.