Possessor: a new horror movie that’s futuristic and fun. A 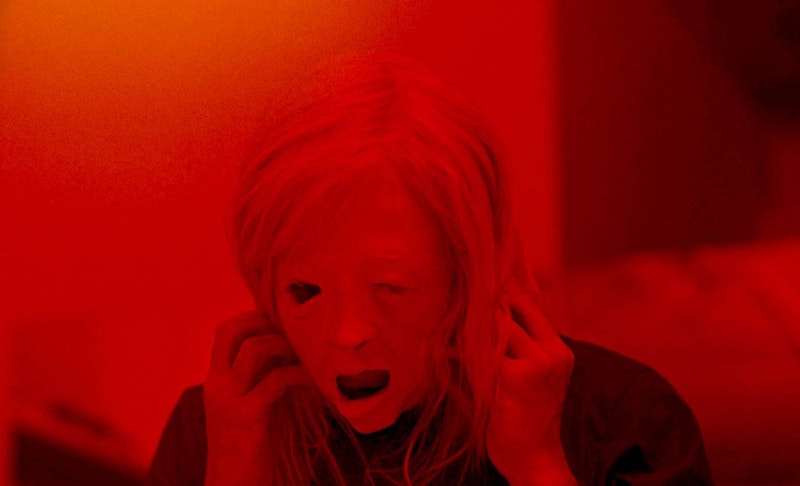 Going through films that premiered at Sundance or the Berlin Film Festival, along with many others whose releases got scuttled and shuttled to VOD and an endless series of streaming services scattered around like so many pay-only pockmarks, I think about an imminent entertainment crisis: lack of product. Going into the last month of 2020, films that premiered at Sundance in January (where they most likely had their own “superspreader” event, with dozens getting seriously sick) are still being eked out for home viewing.

Spree, Eugene Kotlyarenko’s excellent horror-satire, premiered in Park City before going to VOD in late July; Ham on Rye, the Tyler Taormina movie I wrote about last week, premiered at the Santa Barbara International Film Festival in February 2019 but just found digital distribution; Kajillionaire, a major Miranda July film whose widescreen anamorphic cinematography practically demands that it be seen in a big theater with big sound, is only available on Amazon Prime to rent—for $19.99.

I can’t blame anyone trying to make money and forced to improvise quickly due to the pandemic; an overlooked side effect is that even though these movies are available, hardly anyone talks about them. Obvious reasons: no one’s watching at the same time, or in the same month, but throughout the year, and the next several years. Films that we watch at home leave less of an impression than anything outside. I don’t care if it’s projected on a brick wall in a parking lot or a bedbug Regal—in six months, you’ll remember whatever you watched there with more clarity and precision than anything you’ve ever watched at home.

I wish I could’ve seen Possessor, Brandon Cronenberg’s new film, in a theater. Cronenberg, son of David, has emerged as a worthy heir to his father’s cinema of the grotesque and everything wrong and beautiful with the human body. Possessor is a taut, thoroughly modern horror film made by someone who doesn’t feel they’re above the genre. I don’t think this is true of Ari Aster, for example, even though he’s often accused of “slumming it” with major hits Hereditary and Midsommar, waiting until he has enough clout and cash to make his Bergman movie.

But Aster’s movies lack something that all great horror films need: fun. They’re miserable experiences, and even if Midsommar functions best as a romantic comedy, it’s still bone-bleached and cold as ice—no thrills, just cruelty. Possessor is fun: Cronenberg has a story here that could’ve been done on both Black Mirror and The Twilight Zone, to my mind as solid a mark on any horror or sci-fi film today. Andrea Riseborough plays a woman named Holly contracted by an assassination corporation to kill people using other peoples’ bodies. Her primary minder is played by Jennifer Jason Leigh with all the quiet terror and indifference of worlds’ masters.

Possessor opens with a nice murder: Holly in the body of a young black athlete dispatched to slit the throat of some lawyer at a party. Close-ups of blood gushing from the big man’s flabby neck, Holly’s temporary host bending down, her blue and white-striped tracksuit painted with blood. She puts her gun in her mouth, but hesitates—she can’t pull the trigger. Cops show up, she hesitates again before lifting her arm and allowing herself to commit suicide by cop. Holly comes out of her mission more drained than ever, and Leigh’s minder reassures her it’ll be fine, no long breaks are necessary.

Her next assignment is in the body of Colin Tate, played by Christopher Abbott. He stars here, and it’s cunning casting, because Abbott finally gets to act out on the incipient rage and psychosis of his role as Charlie on Girls. I thought it was very funny that Lena Dunham brought Abbott back right before the show ended and made him a lecherous junkie just to get back at him for leaving the show after only one season. Maybe he thought he could break out on his own, like his co-star Adam Driver eventually would. Abbott jumped shipped too soon, and the only reason I lament this is because it probably cost him work.

Abbott has a combination of tremendous rage and a naturally submissive, nebbish delivery. His face is weak, but it’s the face of school shooters and domestic terrorists. He can do a Kubrick stare like no other, and I haven’t seen him able to express any of that yet, until Possessor. We know little of Colin, and neither does Holly. His fiancé Ava (Tuppence Middleton) wakes up one morning to a sullen, confused shell operated by someone other than her future husband. This is obvious from the moment they wake up, and it doesn’t take long for Holly and Colin to get their wires crossed.

There’s an extraordinary sequence near the middle of the movie showing what looks like the collision and collapse of their identities and wiring. A stunning mannequin-like ultra-HD mask melts like so much makeup as yellow and green lights flash, along with traces of Holly and Colin in the red amber of their now shared blood. This is the height of it, but Possessor is full of these kinetic and musical moments—lit like a nightclub without the music. Cronenberg’s film is highly stylized, with most scenes super-saturated with blues, yellows, greens, and reds, and as in his father’s films, the camera lingers over bodies in motion (fucking), and bodies in repose (mutilated). Cronenberg—both of them—see beauty in both. There are worse traditions to keep alive.