This is the End of Your Life

Spree is a disturbing social satire tweaked out by its astonishing cinematography. A 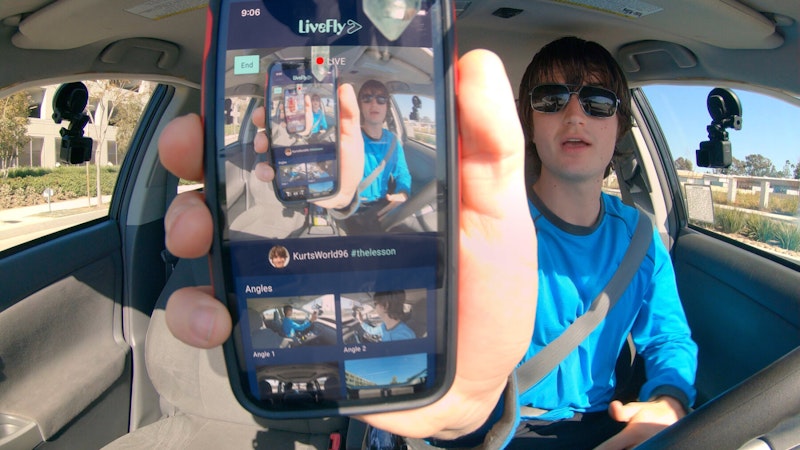 Eugene Kotlyarenko’s Wobble Palace was one of the only dating app romantic comedies I could stomach. Beyond its lysergic look, Kotlyarenko and his co-star/co-writer Dasha Nekrasova hit a really nice note between total nihilism and genuine hope for a better world without ever seeming sentimental. Wobble Palace knows how sick and mentally malnourished its characters are, but this doesn’t lead to familiar leaden lessons about morality and etiquette in our perma-problematized society where every date needs an NDA. Made a year before Harvey Weinstein fell and the #MeToo era began, it walked a fine line between mocking and mourning its hopelessly narcissistic characters. But that was just love, honey. Now Kotlyarenko’s out for blood.

Spree, co-written with Gene McHugh, follows 23-year-old Kurt (Joe Keery), a pathetic and very annoying “vlogger” typical for the last decade on YouTube: unboxing videos, pranks, confessions, tips, tricks, polls, vapes. The film begins with a montage of Kurt’s content by way of an introduction, and we quickly realize how few people are watching him. No one pays attention to Kurt. He's a driver for Spree, a ride share app with its own fictional competitors. Near the end of the opening scene, he films himself park off the side of the PCH, immediately recalling actual spree killer Elliot Rodger, who Kerry bears more than a passing resemblance to. No motive is given for his “snap”—on April 12, 2019, Kurt just has to go. He’s ready to present “#TheLesson” to the world. No reason—not a girl, not grades, not parents, not depression, not even crippling mental illness. Kurt’s a functional sociopath. He's going to murder people all day on his Spree shift and die a legend.

Spree is filmed entirely with diegetic cameras—smartphones, GoPros, security cameras, police body-cams, YouTube and Instagram videos, iPhone screen-sharing, television reports, even a multi-camera stand-up set. This isn’t a “found footage” movie, despite what reviewers and commenters may say. It’s not Blair Witch, none of this footage is being “discovered” by anyone, whether it’s fictional characters or actual producers. Kotlyarenko and cinematographer Jeff Leeds Cohn are making a new kind of movie, one shot with the seeing eyes that surround us all now. Can you “find” something that is omnipresent and inescapable?

Kurt demonstrates how he’s going to murder his passengers in a tutorial video: simply stick a syringe full of unidentified poison into two-dozen plastic water bottles and leave them in the back seat for passengers to enjoy in their last minutes on Earth! Kurt kills a number of people this way: a hipster white supremacist, an attorney, obnoxious partiers, a Thai DJ (who wakes up and accidentally shoots a cop in the head), and a meathead who won’t stop talking about how much he needs pussy and how hot his “Spree Social” co-rider is—Jessie Adams, an up-and-coming stand-up comic played by Sasheer Zamata, best known as a Saturday Night Live cast member from 2014 to 2017.

It’s the first movie of the social media age that synthesizes everything horrifying about it, from the technology itself, to its effects on our daily behavior, and the empty-headed “influencers” chasing followers and “fame” without ever bothering to develop a talent or a skill beyond being obnoxious on camera. This viral sickness is in everyone, from the ultra-addicted like Kurt and “BobbyBaseCamp,” a kid he babysat who also has thousands of more followers than him; to comedian Jessie Adams, who makes a point of smashing her phone on stage and “leaving social media forever.” She’s applauded, of course, by all the audience members not already holding up their own phones and filming the “historic” set. And how short-lived it is: as soon as Jessie gets in a car, she tries to charge her broken phone. Everyone is infected.

Spree had a physical effect on me, beyond the thrill of the ride itself and genuinely not knowing how it would end up. It left me with “that movie feeling” my dad wrote about last week. The montage at the end—where we see the sea of post-rampage media regurgitating all the clichés we’re unfortunately familiar with now—is some of the most bone-chilling stuff I’ve seen in modern movies. The ending of Spree implicates all of us, and immediately recalls recent spree killers with similar motives and methods (like one of the mock articles at the end is headlined, “We Won’t Say His Name.”). It's not just the ending, this is a constant presence throughout the movie, media shrapnel like the official Spree Twitter account announcing a "suspension of service in Los Angeles pending an ongoing investigation" as Kurt hurtles toward the end of his night.

This grief-trauma mill is just as sick, exploitative, and empty as the unboxing videos and obnoxious influencing of Kurt and Bobby’s world. Spree invites multiple viewings not only through its rollercoaster pace but its constant use of multiple screens and perspectives, sometimes as many as four for minutes at a time. Maybe this is what Cinerama felt like: trying in vain not to miss any of the rolling comments on Kurt’s rampage while catching the killing itself.

These feeds, and this inundation of candy-colored information—it’s exhausting and depleting unique to social media. Kotlyarenko and McHugh don’t need to stress the point that Kurt has no actual talents and that he’s chasing fumes because it’s obvious, it’s been made. The way this movie’s shot is completely integrated with its story, and its fly-on-the-wall cameras are essential to its critique. Spree works because it’s fucking scary and completely plausible—this has already happened many times before. As Bobby says at one point, “Murder is boring. Happens every day.”