The Work of City Hall

Frederick Wiseman’s latest documentary about bureaucracy and community is completely immersive and ambivalent. A+ 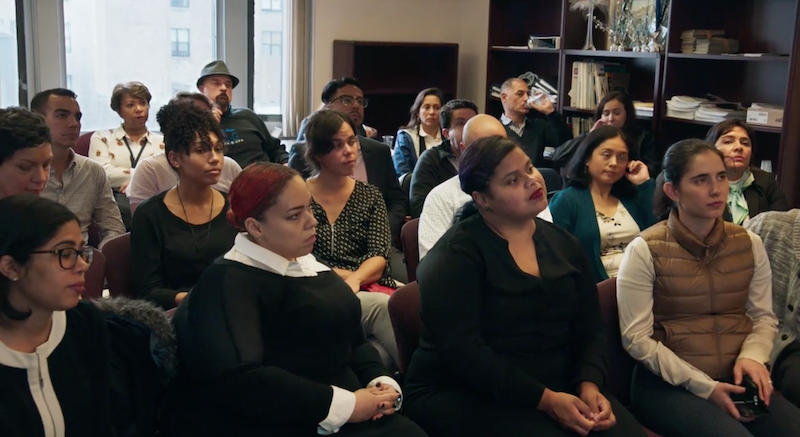 Frederick Wiseman is one of the greatest living American artists—an artist of our country, creating in his nearly 50 films a map of our institutions, conditions, and situations (among them Hospital, Welfare, Aspen, Blind, Missile, Public Housing, Domestic Violence, and Basic Training). Since 1967’s Titicut Follies, a bracing document of the deplorable conditions inside a prison for the “criminally insane” in Bridgewater, MA. After his first film, Wiseman switched to simple, declarative titles that just describe what’s covered, obscuring his opinion and editorial point of view to a perfect point he’s maintained ever since. No wonder he loathes Michael Moore.

Wiseman’s films are superlative examples of what makes for a good film: two sides of a good argument. There are plenty of those in America. When Wiseman covers bureaucracy, he never feels the need to show his hand or make his “point” repeatedly, like Moore, Aaron Sorkin or Oliver Stone. Those men are Hollywood filmmakers, they’re not artists of America, the films they make have nothing to do with America as it exists in real life, every day.

Wiseman’s not concerned with myths and lions and losers: he follows traffic controllers, nurses, engineers, public health officials, the people that actually work in those drab, windowless, reinforced buildings that dot all of our cities. Someone has to keep the phones running, the security cameras on, or approve permits for various business to add this or that. These people are more interesting than Anthony Hopkins playing Nixon or Jesse Eisenberg as Mark Zuckerberg, and their interactions are allowed to play at a length in unbroken takes that makes deceptive editing appear close to impossible.

(Many of Wiseman’s films are extremely long, and his latest, City Hall, is no exception at four and a half hours.)

City Hall brings Wiseman back to his home city of Boston, and at 90, he’s as sharp as ever. For some perspective, the “star” of City Hall is Mayor Marty Walsh, as he’s the only person who appears in more than one scene. With and without Walsh, we travel through many of Boston’s routine ceremonies, meetings, discussions, and processes that keep the city running.

Through the first half, we see a marriage, housing inspection, budget meetings, food bank visits, parade planning, and managing the celebration of the Red Sox winning the 2018 World Series through the eyes of Walsh. Unlike In Jackson Heights, where Wiseman examined a community from the constituents’ point of view, City Hall peers from the top with Walsh, without ever looking down or condescending. We never see Walsh or anyone else "slip" their public mask, and most things are taken on their face. This is a much more magnanimous and generous film than many of Wiseman’s documentaries, the best of which function as pure documents and stinging indictments.

But in City Hall, Wiseman has hope and affection that’s absent in, say, Meat or Missile. There are no blowout fights, no shocking incidents, no tragedies, nothing unexpected. City Hall shows hundreds of people making Boston run, and on the face, their work and their lives are “uncinematic.” But if films at their best can offer new sets of eyes on new worlds, there’s nothing more thrilling than a visit from the exterminator or a meeting with a community board member to plan for a political convention that never ended up happening.

Take the stock “Veteran” character from any of those post-West Wing products and put them against the man that brings a rifle covered in signatures to a meeting in city hall. In a scene that runs about half an hour, the man tells us about a square in Boston named after his uncle, who bore his namesake. The uncle died serving in WWII in Italy in 1944, and this man survived multiple tours in Iraq and Afghanistan. How to deal with the guilt? He went around collecting signatures from veterans in his uncle’s company, and eventually he connected with an older relative who, in his own words, was “a grouchy old prick.”

The man fought in the Battle of Okinawa, and it was only after the younger man came back from war that the elder veteran even gave him the time of day. And much more: one day after signing the rifle, he gave his nephew a piece of war bounty: a royal purple bag of Japanese gold teeth. There’s a murmur in the room, and the man clarifies that he’s not advocating war or violence, these are simply the things you carry.

A consequence of Wiseman’s length and deceptively “boring” subjects is that nearly every review for every film of his starts with the same two paragraphs that this one did. Mahola Dargis, in The New York Times, did the same, but it’s not out of laziness: there’s still a basic need to make Wiseman and his films more known. This process will be redundant and mundane but I hope will lead to something like satisfaction at some point. Most of his movies have a similar effect.

Unlike Domestic Violence, for example, City Hall doesn’t end with a climactic scene or change its cruise control pace. There’s plenty of talk of people “doing the work,” as Splice Today contributor Oliver Bateman likes to say. Spending hours in this bureaucracy that phrase comes up often, but ultimately, City Hall shows how things can work in our imperfect world. The final scene shows two cops—a black woman, and a white man—singing the National Anthem at a city function. The woman has a great voice, delivering the first verse of the song splendidly.

Then the guy comes in. He looks like Harry Carey Jr. and sounds like a goat. He tries to harmonize with his singing partner in vain, and she drops out to let him bray. Eventually she rejoins him, and they struggle to stay in the same key, but never quite resolve. As the camera pans to the audience, we can see two women in the front row give each other huge eyes. “WHAT was that?” it looks like they say. But who knows: this is what serves as commentary in Wiseman. Make of it what you will.