Hopes in the Sky

Armando Iannucci's The Personal History of David Copperfield is a smart, self-aware adaptation that even puts last year's Little Women to shame. 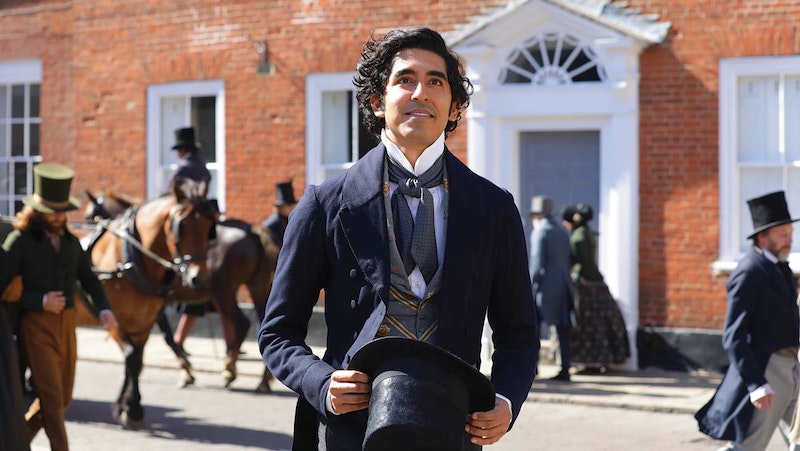 Hamlet once famously said to Horatio, “I could be bounded in a nutshell, and count myself a king of infinite space, were it not that I have bad dreams.” In many respects, David Copperfield, Dickens’ lovingly long-winded history of a boy who survives London life, is his answer to Hamlet. London is a prison, and within its gray boundaries, David is a boy who has good dreams. That’s the vision that Armando Iannucci has brought stunningly to life in his recent adaptation of Dickens’ novel. It’s a pleasure to watch Copperfield negotiate the space between his dreams and his realities, gradually bringing them into alignment.

David is first played by Jairaj Varsani, a young actor who eventually grows up and becomes Dev Patel. Varsani’s a wonder, a charming boy with twinkling intelligence who radiates courage and good faith, even under unbearably harsh circumstances. The heart of the movie is laid bare early on, when Varsani imagines himself living in a converted boat. He wanders through the streets with the young maid of the house, overjoyed by her predilections for climbing ladders and pretending to social graces. He plays seaside games with the aging patriarch, slits fish with the working women, and learns about ships from his able friend Ham. This is life at its best, as he understands it; he has a dreamlike bed in the ship’s lookout, and appreciates even the old woman who finds something wrong with every meal she eats. He’s a stand-in for Dickens himself, as Dickens looks fondly over the world with something akin to universal compassion.

After reveling in this pastoral for a while, the film shows a giant hand ripping open the sky and pulling young David back into the world of reality, where he’s the half-hearted project of his new and vicious stepfather, Mr. Murdstone. Murdstone chides him for everything about his dreams, including the muddle of a ship being used as a house, which David has taken to drawing wistfully as his real family life disintegrates around him. The muddle is what Dickens loves best, suggesting both the fish out of water that Copperfield becomes for most of his maturation, and the mixture of good and bad within people themselves. When Murdstone tries to beat sense into the boy, all that happens is that he embeds, within David, a learning disability that will haunt him forever: when he tries to read, under pressure, he turns dyslexic. Then, in another happy turn, his dyslexia about the other stories in the world makes him more preoccupied with his own memories and visions, the better to turn them into the autobiography he is (from the film’s beginning) in the process of narrating.

“What lies ahead for you,” Mr. Murdstone roars at David, “is a fight with the world—and the sooner you begin it, the better!” That fight with the world is the film’s great concern, for as Copperfield makes his way throughout London, he meets with grotesques who’ve been deformed by its institutions. People in Iannucci’s film, like their originals in Dickens, are presiding spirits of places; the head of the blacking factory, for instance, speaks in a sinister whisper, as though choked by his own materials. The professorial figures, Mr. Dick and Mr. Micawber, bounce around sadly and almost insensibly, their erudition finding nowhere to rest until Copperfield can coop it up in a book of his own.

Copperfield’s quest, in the midst of all this deformation, is to remain standing, and retain his own natural name. His aunt, who wishes he’d been born a girl, renames him Trotwood; his putative best friend, James Steerforth, calls him “Daisy.” Even Murdstone goes around renaming people, although he doesn’t really like David enough to dub him a Murdstone. As with any good kunstlerroman, in which a young boy of uncertain talents becomes a writer, David comes into his name at the moment when he finds his writerly voice. But that takes a very long time. He has to slip between the Scylla of poverty and the Charybdis of greed and snobbery, gradually washing himself clean of the stains of both.

To the film’s immense credit, when David does his writing, Iannucci has found perfect snippets of Dickensian prose to adorn the film. In a way, these snippets are the greatest surprises that the film has to offer, because they give us something beyond film’s ordinary scope: they illustrate the difference between an ordinary landscape, as seen by a dreamer, and the same landscape as seen dully and impartially by the camera. When we meet Steerforth’s mother, a vicious snob, she seems unlikable, and that is all. It takes the writer within Copperfield to perceive that she has been “sharpened” by the “grindstones” of her life until she is “all edge.”

It’s commonplace to say that a film such as this has “affection” for its “source material,” as though all that was required of a great director was that he be a consummate enthusiast. There are plenty of comical tricks at work in The Personal History of David Copperfield, and Iannucci has fish-eye lenses and outrageous sets for all of them; the film’s wackily off-kilter from the word “go,” the very first remembered scene, which oscillates along with the pendulum in a grandfather clock. But the real affection here is Iannucci’s love of writing, which “shines through” even in the development of the minor characters. Hugh Laurie’s Mr. Dick, an eccentric full of voices obsessed with a deceased king, is living virtually in filth when David comes upon him. His room is tufted with insane scribblings, plumed with them, like something from A Beautiful Mind come even more unhinged. David cajoles the old man into giving his ideas to the wind by attaching all the notes to kites and letting them fly.

I can hardly imagine a more fitting description of the film itself, and by extension, great art in general: it takes our private obsessions and makes them into a gift that we scatter beyond our own powers of retrieval. I don’t know what happy circumstances persuaded Iannucci to go from satirical exercises like The Thick of It to this, but it’s a wonderful leap he has made, and worth your time. Don’t be dissuaded by the faint praise that stuck this movie with a bad reputation as a charming family film. It’s not for the weak of heart, thank goodness. It’s a self-aware work of art that puts even the memorable remake of Little Women to shame. It’s a wonder as small and as winning as the protagonist himself.