The Godfather of Gore

Fulci for Fake is a documentary for all fans of giallo cinema. 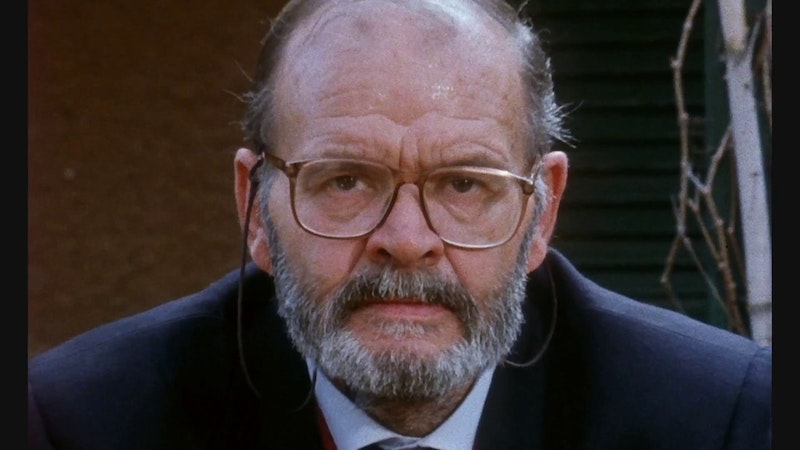 Fulci for Fake has a fascinating approach to documentary filmmaking: Simone Scafidi directs, where we follow actor Nicola Nocella as he portrays the late Italian horror director Lucio Fulci, best known for Zombi, The Beyond, Don't Torture a Duckling, The House by the Cemetery, and The New York Ripper, among others. Studying for his role, Nocella interviews close friends and family members to gain insight into the man he’s about to play in a non-existent biopic.

Obviously bitten from Orson Welles’ 1973 pseudo-documentary essay film F For Fake, Fulci For Fake is just as slippery with reality, even its own. Fulci was a dark man, a mystery to both the public and those that knew him best. He was labeled as reclusive and hard to get to know. He was a self-proclaimed misogynist. A tortured and pained individual, yet a loving father and family man. Someone who was admired. He was mythologized and never argued against these myths.

Fulci directed 15 comedies before beginning to make the “giallo” (Italian for “yellow,” referring to the pages of pulp books) that he’d later be famous for. The early comedy films are usually passed over. Seeing them may not be necessary to understand Fulci's genius. But working on them taught Fulci filmmaking and helped fuel his development as an artist. When he began making horror films, he was already fully realized: 1972 brought Don't Torture a Duckling, which Fulci regards as his best work, along with 1969’s Beatrice Cenci.

Scafidi's documentary doesn’t deal much with Fulci’s early life. Like Welles' film, Fulci for Fake blurs genre and disassembles reality and fiction. Fulci's daughter, Camilla, is the glue of the film; she had a very close relationship with her father and later became work partners. As a child Camilla fell off a horse, resulting in a waist-down paralysis and an inability to walk, which critics and friends claimed affected not only Fulci's mental state, but the subject of his films. Additionally, his wife committed suicide in 1969 after finding out she had inoperable cancer. These two tragic events in Fulci's life would appear in his work in different form, always in indirect and ambiguous ways.

Though described as grumpy on set, and difficult to get along with or please, Fulci was generally well-liked and respected by friends, family, co-workers, and peers. He amassed lifelong relationships, including one with acclaimed director and rival Dario Argento. The two were set to work on a film when Fulci died of diabetes complications in 1996 at 68. Since Fulci had been out of work due to physical illnesses, he died penniless. (Argento paid for Fulci's funeral arrangements.)

Near the end of the documentary, Fulci's other daughter Antonella is interviewed. Lucio and Antonella had a rocky relationship, which Fulci refused to discuss. Nocella claims that in his meeting with Antonella, he learned the most of Fulci's character. But during the interview, not much is discussed. Antonella claims her father was a complicated man, and spares compliments. The point Scafidi makes is clear: Lucio Fulci was not a man who was well-known by others. He bottled his pain inside and rarely let his feelings out. He wasn’t affectionate in the traditional sense. He didn't show his love with hugs and kisses, but in other less direct ways.

Similar to an Errol Morris documentary, the film weaves in and out of fact and fiction as the actor portraying Fulci is seen pulling off his prosthetic mask. This movie touched less on aspects of filmmaking that I was interested in, such as the infamous shark scene in Zombi 2, but it brought some insight into one of the greatest filmmakers of all time.