Megacity of the 23rd Century

Could the centralized "survivors" of Logan's Run (1975) be our future? 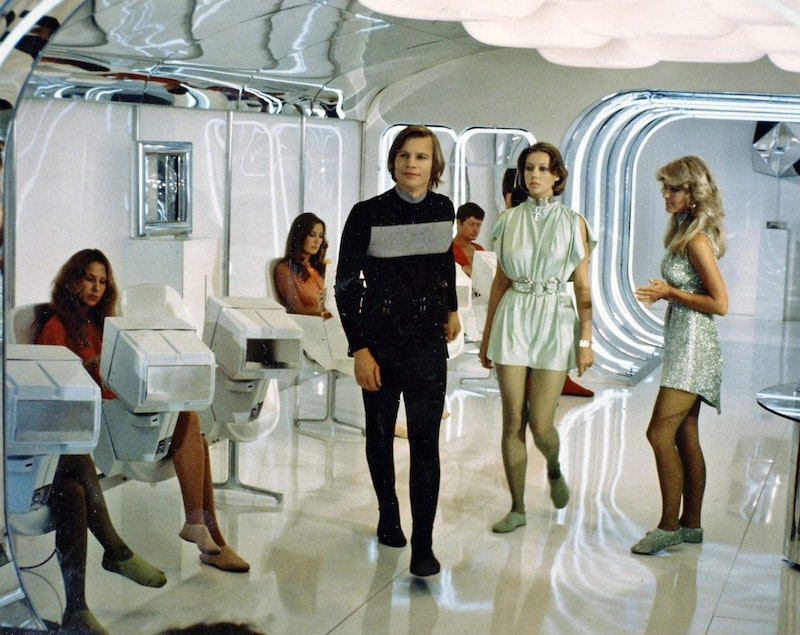 Most of the 1970s science-fiction movies the Criterion Channel selected for the collection they streamed in January were downbeat near-future tales about dystopias and bad situations. Protagonists struggled, and often failed, to achieve some kind of equivocal triumph: to get the merest hint of hope in a world that had gone down the drain further and faster than anyone could’ve expected.

There was also Logan’s Run, which stood out as a break from the pattern. It’s not the most sophisticated film, and doesn’t try to be. Enough to be a colorful adventure story set in the far future, with a lot of action and imaginative locations and a sense of wonder.

Opening text tells us that this is a 23rd century in which “the survivors of war, overpopulation, and pollution” now live in a single sprawling domed city. Mechanisms take care of their every want, but the population’s kept strictly limited: anyone over the age of 30 is executed. Some of these thirtysomethings try to get away from the city. They run.

Logan 5 (Michael York) is a Sandman, responsible for tracking down and executing runners. After he meets Jessica 6 (Jenny Agutter), a member of an underground radical cell, he’s ordered by the computer that runs the city to go undercover as a runner. The computer’s idea is that Logan will make contact with the resistance, and find out the location of the legendary Sanctuary to which the runners supposedly escape. The computer advances Logan’s ‘life-clock,’ a jewel embedded in his palm, which marks him as having aged out: so he has to run, fleeing his former best friend among the Sandmen (Richard Jordan).

The movie was directed by Michael Anderson (no stranger to futuristic dystopias, having made the 1956 version of 1984), and written by David Zelag Goodman, co-writer of Straw Dogs. Based on a 1967 novel by William F. Nolan and George Clayton Johnson, it would go on to spawn various prose sequels, comic tie-ins, and a short-lived TV series. For over 20 years Hollywood’s tried to get a remake off the ground.

You can see why they keep at it. The movie made a fair amount of money in its original run, and its basic storyline is still relevant: it’s a kind of early draft of the teen dystopias that have become common on page and screen. The original novel, in fact, set the future’s cut-off age at 21.

The odd thing about the movie is that it has that level of sexual sophistication while being unsophisticated about almost everything else. It’s a straight-ahead chase movie with a sympathetic man of action as a lead. The plot’s linear and slightly episodic, and the ending—when Logan and Jessica return to the city to overthrow the computer—is barely coherent. The film works despite this because it’s clearly aiming at being a crowd-pleaser, simple and direct, saved from camp only by lacking the self-awareness that usually accompanies camp.

As science fiction, it’s simplistic. The future society’s mostly clichéd: children are raised in a crèche, everyone wears color-coded uniforms, there’s no immediately obvious sense of art or culture. The movie doesn’t bother trying to explain how this society works, because it’s not even slightly interested in it. Why should it be? This is not a story that seriously tries to extrapolate a far future, or make a statement about youth and age, or give a warning about overpopulation. It’s a movie about a slightly naive man who gets himself into an adventure with a pretty girl.

York and Agutter are pleasant leads, and if the movie works it’s because they’re both charismatic enough that the movie’s consistently fun. We follow them through visually varied settings, through gunfights and chases and discoveries of weird things, and want to know what happens next.

It helps that the imagery’s overall effective, stylish and bright. A scene at a futuristic plastic surgeon is especially engaging; so is an extended sequence in the last act that takes place in an abandoned and overgrown Washington D.C. The movie’s colorful, with a different palette for every major sequence. This builds a sense of variety, and emphasizes the diversity of the set-pieces.

Occasionally the visual effects don’t hold up. Sometimes the movie shows the model of its futuristic city too long and too closely, unintentionally emphasizing its fakeness. And the overall look of the interior of the city is very bare-bones, white plastic modernist architecture that speaks of a conventional 1970s understanding of the future.

None of this is awful. But these little flaws make clear why Logan’s Run would be eclipsed by Star Wars, released less than one calendar year later. The two movies try to do the same thing, but Star Wars does it much better, and created the template for would-be blockbusters to follow. Its world is lived-in where Logan’s Run is not. Its story is faster-paced. Its universe is more detailed. There’s no question it’s a more successful film. But if Logan’s Run feels like an artifact of the 1970s by comparison, it still has some undemanding pleasures of its own.