The myth and music of Kagura and ancient rural folk traditions saving the world in three 1970s monster movies. 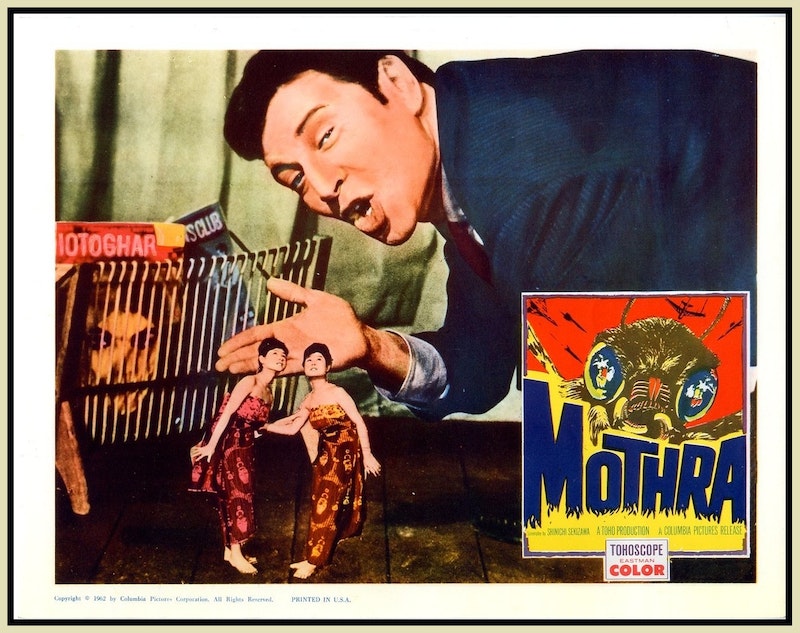 Two fairy girls stand side-by-side dressed in the colorful indigenous garb of a Pacific island tribe. Blades of grass tower over these twins. In unison they sing a moody folk song. It’s gentle and enchanting just like them. Their home is the remote outpost Infant Island and the responsibility they bear is massive. Without the tranquilizing power of their harmonies a huge bug named Mothra will tear apart a city and coat its rubble with a gummy suffocating mess of web fluid. Situations like this play out repeatedly in Japanese kaiju films. Each time that civilization attempts to use high tech weaponry to fight against monsters like Godzilla, Gamera, and Mothra, the efforts exacerbate an already chaotic melee. Catastrophes brought on by these behemoths can only be confronted with folk music and supernatural powers.

Kagura is a traditional Okinawan music style that’s part of a Shinto music ceremony meant to inspire bountiful harvests for farmers and fishermen. According to mythology, it was invented when Ame-no-Uzume (the goddess of dawn and revelry) came upon Amaterasu (goddess of sun and light) who was trapped inside of a cavern after a brutal fight with her brother Susanoo (god of seas and water). As a result of Amaterasu’s imprisonment the Earth was immersed in pitch-black darkness. Ame-no-Uzume’s music was the first kagura ever made and its sound power was all that could release her fellow goddess. Upon gaining freedom Amaterasu expressed gratitude by creating peace, good fortune, and eternal light for all. The power and purpose of Ame-no-Uzume’s music shares many similarities with that of music made by the twin Shobijin fairies, the magic entities who quell and control the giant insect in the Mothra film series.

In 1970’s Gamera Vs. Monster X there are no singing fairies but sound and indigenous tradition both play a crucial role. The film follows a group of greedy fortune hunters who steal a prehistoric idol from the tiny Wester Island in the South Pacific. Presuming it’ll make a lucrative attraction at Japan’s Expo ’70, the thieves dodge an angry tribe and the giant fire-breathing turtle Gamera before getting the artifact into their ship. Trouble starts on board where the sculpture begins to emit ear-shattering tones that torture the looters. This sound turns out to be the one thing that can hurt Wester Island’s resident homicidal triceratops Monster X who escapes from an underground limbo once the statue is out of earshot. After awakening, the beast sets off for Japan with the soul intention of destroying anything in its way. When the Japanese military discovers the ancient noise statue’s power they use it to pacify Monster X once their own weaponry proves to be useless against the creature.

Echoes of the kagura myth and a glitzy spin on the musical savior concept came with Godzilla Vs. Mechagodzilla (1974). In this film a group of scientists venture into a remote region of Okinawa seeking assistance from the slumbering immortal shisa King Caesar, guardian of the Azumi royal family. This mammoth gilded lion is trapped inside of a rocky crag at the edge of a beach and only a ritualistic song sung by an Azumi can bring him to consciousness. The singer best equipped for the task is Nami Kunugami (Bellabella Lin), a waifish kimono clad princess whose demeanor is much like that of Mothra’s wholesome Shobijin. The big difference comes in the music: instead of ethereal folk sounds Nami‘s singing is accompanied by a guitar-driven pop combo and a concert orchestra. No part of the immense ensemble materializes on the beach; the accompaniment just starts pumping out of thin air when Princess Nami starts singing.

As the brassy tune concludes, King Caesar emerges with fearsome glowing eyes and steam pouring out of his nose. He joins Godzilla and the robot super hero Jet Jaguar in their victorious battle against a cabal of alien fascists and the robot dinosaur Mechagodzilla. Yet again Earth is rescued from annihilation by supernatural forces and the rural folk traditions of an ancient world.