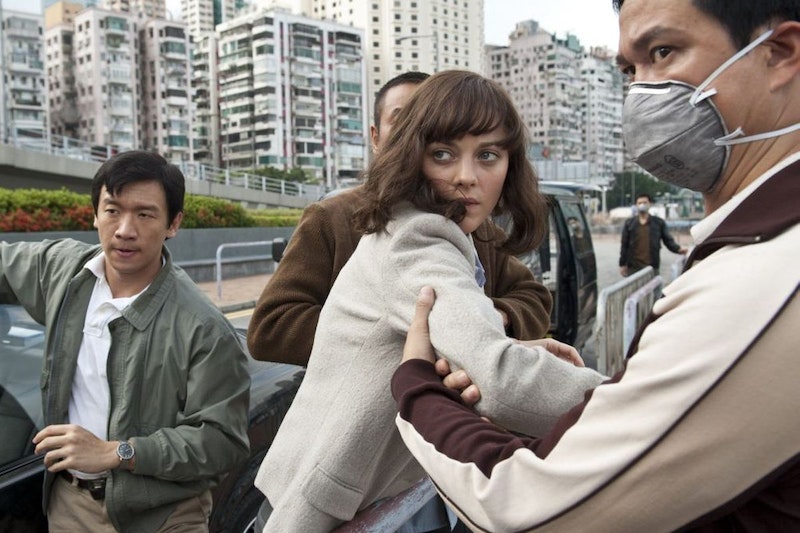 Steven Soderbergh's 2011 film Contagion has been one of the go-to cultural references for the ongoing coronavirus pandemic. The parallels are obvious; the movie is about a virus with high mortality and transmission rates that lead to global handwashing, death, and overloaded health care systems.

Less discussed is the way that Soderbergh inadvertently captures, and reproduces, the prejudices that cling leech-like to disease and disaster. Contagion scapegoats with slightly more subtlety, but no less enthusiasm, than Trump and the right-wing hate machine.

Soderbergh's movie adopts a pretense of clinical distance, as the camera leaps around the globe from character to character, or zooms in to focus on innocuous surfaces turned suddenly deadly by the touch of a human hand. That sober, omniscient approach, though, can't quite conceal a series of predictable, ugly moral judgments.

The most dramatic of these is directed at Beth (Gwyneth Paltrow), the first person infected. Beth hails from Minneapolis, where she lives with her all-American husband Mitch (Matt Damon), a man so pure he's immune to the virus. Beth, though, isn’t worthy of her incorruptible spouse. She's a globetrotting, cosmopolitan career woman, who travels to and parties in Hong Kong. She stops off on her way home for a layover in Chicago, where she has a seedy sexual encounter with a former lover. The virus, picked up overseas, is the result of her infidelity, both geographic and sexual. Independent women, leaving home, drinking, gambling and screwing, spread filth and apocalypse.

Beth's sin is in part that she left the country, and fucked about in foreign climes. The virus originates in Hong Kong. At the conclusion of the film we see that it was created because of unsanitary conditions at a pig farm, where bats were let into the pens and the pigs ate their guano before being taken off to slaughter. A chef cutting one of the infected pigs doesn’t wash his hands before going out to meet and greet Beth, and seals her doom when shaking her hand for a picture. The entire world is placed at risk by the unsanitary food-preparation practices of the East.

The vision of Hong Kong as dirty and corrupting is in line with the GOP's efforts to blame coronavirus on China. Texas Sen. John Cornyn claimed (with no evidence except his own bigotry) that the coronavirus is the result of people in China eating bats. Trump has referred to it as the "Chinese virus." The virus does seem to have originated in China, but it’s now global, and using the regional designation is dangerous, since it leads people to misidentify who’s at risk, and how it could be avoided. The anti-Chinese rhetoric on the right has also led to hate speech and violence against Asian-Americans.

The right hasn't leaned into misogyny during this crisis, other than some efforts to leverage coronavirus to deny women access to abortion services. But they have dabbled in anti-Semitism, with Sheriff David Clarke muttering darkly on Twitter about how the virus must be the fault of billionaire philanthropist and Holocaust survivor George Soros. Nor is it just the right; actor Rosanna Arquette claimed (without evidence) that Israel knew about the coronavirus before the pandemic started, and allowed it to rage unchecked.

Disease is real. But it's also a symbol. We associate illness with impurity and immorality, and with groups who are seen as immoral and impure—foreigners, women, Jewish people, queer people. The Nazis consistently claimed that Jewish people spread disease. Reagan refused to confront the AIDS crisis because the Right believed that gay people were getting what they deserved for immoral behavior.  Trump blames China for the disease rather than acknowledge his own slow and inadequate public health response. Contagion is a Hollywood portrayal of how a virus spreads. But it also shows how our ideas about viruses are infected with prejudice, stereotypes, and loathing.