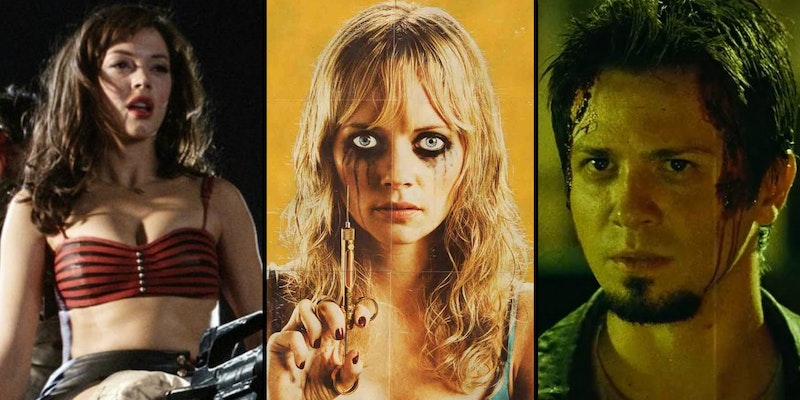 Due to recent events, three hour-plus films put off for years are finally being seen. You don’t have to watch Breaking Bad for the sixth time, or reappraise The Sopranos with everyone else (where did that come from? A decade after David Chase’s classic HBO series ended, it’s reemerged as a major part of the pop cultural lexicon, in a way that it wasn’t for a few years after James Gandolfini had his last meal in Italy)—during this time you’ll watch Shoah, you’ll watch An Elephant Sitting Still, you’ll binge watch all 14 segments of Berlin Alexanderplatz in one day despite the fact that it was aired over a few months and meant to be watched that way (or not for mad Bavarian Fassbinder, who maybe jokingly insisted the proper way to watch was in two chunks).

Maybe Frederick Wiseman’s Near Death will be your Shoah. It's almost as long and almost as upsetting. In any case, I watched Grindhouse for the first time since its opening weekend in April 2007. Robert Rodriguez and Quentin Tarantino’s 191-minute ode to trash cinema did little for me back then, especially coming only three years after Kill Bill. This was a joke, not a serious effort—and it was the beginning of Tarantino’s fallow decade of regression and repetition that he’d thankfully break with his grand masterpiece Once Upon a Time in Hollywood. After Jackie Brown, Tarantino made every one of his films an event simply by numbering them: seeing an exhilarating teaser trailer before Gangs of New York in December 2002 that ended with the title card, “THE 4TH FILM BY QUENTIN TARANTINO” was amazing, I'll never forget it. As a 10-year-old, I thought this guy must be a big deal—who makes three movies and gets Uma Thurman in Bruce Lee stripes slashing Japanese gangsters for their fourth?

After pulling off Kill Bill commercially, critically, and artistically, Tarantino must've been tired. Grindhouse is not the work of a director who has self-limited his output. Robert Rodriguez's Planet Terror remains the more interesting segment, if only for its total commitment to the project. Rodriguez’s film isn’t just a tribute and pastiche of grindhouse movies, it’s really a hodgepodge of all B-movies and every trope you can think of, but adrenalized and made so absurd it’s hysterical. One doesn’t cry or scream when Marley Shelton gives her son (played by Robert Rodriguez’s own young son) a gun “to protect himself.” Before leaving the car and going to go kill some zombies, she warns him not to point it at himself. As she’s walking away, we hear a shot, and we see the boy, who has committed suicide. No time to mourn: Rose McGowan is busy blasting infectious zombies with her gun-leg, Michael Biehn is reliving his 1980s action cheese past, and Josh Brolin is melting before our very eyes. The first part of Grindhouse moves so fast with so much verve and joyful stupidity, a pace sustained through the fake trailers by Rob Zombie, Edgar Wright, and Eli Roth in the middle.

Planet Terror is as delirious and fun as it was in 2007, and frontloads Grindhouse with all the pulp and guts and “damaged reels” that Tarantino abandons less than an hour into Death Proof. Of the two, Planet Terror is a good movie to watch right now, knowingly cheesy without ever being smug or pretentious. Despite the "deadly infectious disease" part of the plot (I completely forgot about that), it really is the perfect movie to take your mind off current events, even more so than something like Death Wish or Cobra. Rodriguez wallows in all kinds of bad filmmaking, clichés, and tropes, and his movie—and the project—are richer for it. Tarantino had his own agenda: Death Proof sinks Grindhouse. Tarantino couldn't bring himself to make a movie as knowingly "bad" as Rodriguez. Instead, he made the most boring movie of his career.

Putting a cap on your own output obviously makes each film that much more important. Tarantino spent a decade in the woods, following Death Proof with the uneven and, in my opinion, ultimately unsuccessful Inglourious Basterds, and then his real grindhouse film Django Unchained, and in 2015 The Hateful Eight, a good movie that’ll probably work better on the stage. Two Westerns? Enough: Monte Hellman helped get Reservoir Dogs made, and Tarantino returns the favor in Death Proof with a noticeably sleek and cleanly shot car chase that feels like it's bursting out of another piece. This is light years away from Planet Terror. Tarantino’s genre touches are kind of fun—the “replaced” title card, the jumpy reels, that final freeze frame—but his segment remains the piece that sinks Grindhouse and betrays a particular egotism: Rodriguez can make the “bad” movie, I’m doing my thing. And he does, badly. Death Proof is leaden with the most uninteresting dialogue in all of his films, and Tarantino’s grotesque performances in both films really make it hard to avoid how fucking annoying and creepy he is.

After imprisoning Rose McGowan in Planet Terror, Tarantino’s soldier character catches a trailer for Women in Cages. He groans, “I’m gonna get my dick wet,” referring to McGowan. She stabs him in the eye with her peg leg, but not before he can make her wriggle like an eel before his hulking, pungent body. Tarantino’s sleazy bar owner role in Death Proof is simply more room for him to be a massive asshole and grab his actresses. The rest of the movie is talk, talk, talk, and it feels a world away from the mature and subtle statement of his last film.

Did Tarantino have to purge the last dregs of his schlock fetish in the decade in between Kill Bill and The Hateful Eight? Maybe so, and if his next and final film will be somber or sober at least, he’ll have his career cleaved clean in two: movies that mock and subvert tropes of a given genre, and those that embrace them without critique. Django Unchained is a very fun movie, but is it better in any meaningful way than the original Django? Would The Hateful Eight have made sense as Tarantino’s Broadway debut? No, and yes—Grindhouse luckily turned out to be the peak of Tarantino’s masturbatory tendencies, and it’s a drag to see even today.