In John Schlesinger's Darling (1965), Bogarde tries his best to satisfy his own mod "It girl," played by Julie Christie. 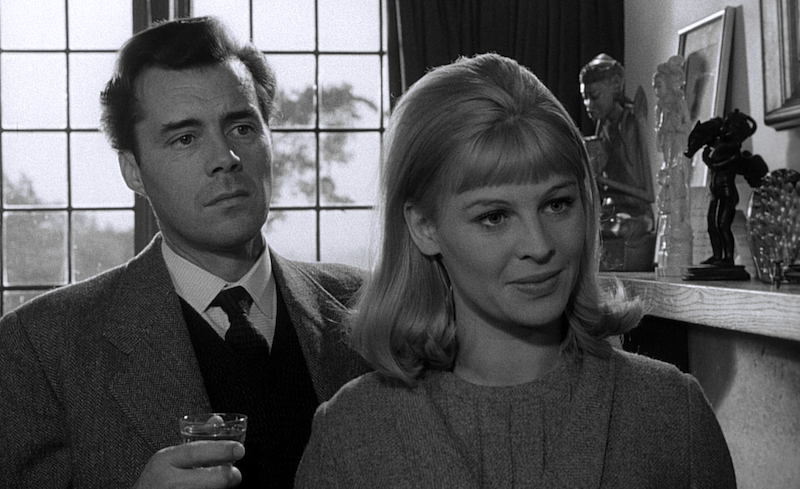 Restlessness is part of being human. Sometimes, it’s an indication that our lives may not be in order and that existence needs tending. But what happens when this restlessness reaches no end? What if the person who’s restless never reaches any peace? In addition, what if the restlessness gives the person a reason to be morally corrupt, indifferent, overly sentimental, and dispersed? That is what constitutes the main character in John Schlesinger’s film, Darling (1965).

Julie Christie plays the “It girl,” Diana Scott, who can’t make up her mind about the men in her life. As the film opens, Diana narrates (voice-over) in an interview all the choices she has made and how those choices have affected her. As she looks back, we begin to gather the picture of a woman who’s not content about anything. She begins having an extramarital affair with a kind and earnest television producer, Robert Gold (Dirk Bogarde), who’s also married. Robert decides to leave his wife and children but as he and Diana enter a supposed domestic bliss, she begins to feel as if something is yet again missing. She begins to hate Robert: his books, his job, his demeanor. None of this makes sense since Robert has only showed kindness to her.

Concurrently, her life as a model is growing and she’s happy to enjoy the jet-setting crowd of the 1960s mod scene. She meets Miles Brand (Laurence Harvey), an advertising executive, who adds more success to her career but naturally with a price—sex. But even this is filled with ambiguity. Diana isn’t exactly a victim here because her continuous restlessness and a need to be filled with something new is what drives her decisions, including an empty affair with Miles.

Harvey’s Miles is a charmer, and debonair, who exudes sophistication that often becomes a diversion and a distraction from the sleaziness of his motives and intentions. Diana continues to be seduced. As she tries to be outside of an establishment and go against the societal convention (something she makes clear at the beginning of the film), she loses any individuality that she may have had. As Robert mentions, the culture that goes against the convention and that considers itself counter-cultural is actually engaging in their own collectivism and convention. Their counter-cultural fight against the norms (such as marriage, family, morality) is empty precisely because it lacks metaphysical constancy. Its rootlessness and a lack of definition renders it meaningless.

The same way she left her “too much younger” husband for Robert, she leaves Robert for Miles. Under the pretenses of finding an acting job, she leaves with Miles for Paris and experiences what’s supposed to be the height of sophistication. Wanting to be part of the jet-setting movement, Diana attends a party. Everyone but her is aware of what will occur. She doesn’t comprehend why they’re all sitting in front of a bed, looking at a woman and a man who begin to undress. One can assume what happens next, and while everyone enjoys the spectacle, Diana averts her gaze, as if she’s feeling shame for the man and woman, who are apparently free of moral “bugaboos,” to use Hugh Hefner’s expression (the 1960s and 1970s were also filled with suburban sexual explorations, such as the so-called “key parties,” a way of life brilliantly depicted in Ang Lee’s The Ice Storm, 1997).

What happens next is the pinnacle of decadence and sexual revolution of the 1960s. Gyrating to pseudo-tribal music, the participants in this party exchange clothes among one another. Men are wearing corsets, wigs, and earrings; women are wearing ties and shirts. Everything is inverted. “Why are they doing this?” asks Diana. “It’s fun, it’s fun,” says one of the party-goers. Diana moves between two states of mind: first, a visceral reaction to the perversity and strangeness of the situation. She’s repulsed. Second, a weak acceptance of the reality in order to fit in. She has no scruples because she’s immature and impetuous. “I always feel there’s one more corner to turn. And I’ll be there,” Diana says to Miles. “That’s the attraction of corners,” replies Miles.

Much of Darling is about power structure between human beings. The elites are pretending to care for the poor and the hungry in Africa, yet they do it from the comfort of their own decadence and phony largesse. Diana’s face, “The Happiness Girl,” “the ideal woman,” is plastered on the street billboards over the face of an African child. Celebrities still treat such causes in a narcissistic way, in which children they’re trying to help are mere tools and objects that serve as a sign of false virtue.

There’s a power struggle between Diana and men in her life. Throughout her entire series of escapades (which include an abortion, politely called “miscarriage” in the film, she ends up in a marriage to an Italian prince, which she sees as yet another prison), it’s Robert who remains steady. Despite the fact that he committed an affair and left his wife and children, the intent appears to be real love. Bogarde plays Robert with an incredible resolve, of a man who has been hurt and betrayed. Yet there’s always an indication that he suspects Diana’s true nature. He senses that their happiness will be short-lived because Diana lives an inauthentic life. It’s only Robert who lives a life of fullness. He’s comfortable in his own skin and doesn’t need the transience of a trend to be defined. Like in most performances, Bogarde always exudes quiet stoicism, a restraint with a perfect amount of emotion. He represents the stability that’s desperately sought by Diana, and perhaps the society at large.

As Diana escapes the overpowering walls of the Italian castle she now calls home, she pleads to Robert to take her back. She loves him, or so she claims. She’s telling the truth, or so she claims. Robert, in his own cold sadness of the reality says, “All your lies are true at the time.” He forces her to go back to Rome. The “Happiness Girl” never becomes a woman.

Darling functions as a social commentary, yet unlike Basil Dearden’s Victim (1961), it’s not so far removed from modern life. Although the British mod scene lasted for a short period, the reality of rootlessness brought on by the counter-culture as well as the sexual revolution still remains. It has changed the forms but the idea of restlessness and imprisonment that Diana Scott is constantly escaping is still part of many women’s lives (mostly brought on by their own, often unnecessary, actions). There’s always “one more corner to turn,” inevitably leading to a dead end.