Something Went Wrong with The Woman in the Window

It might find an audience on Netflix as a trashy Saturday afternoon movie—but that doesn’t mean it’s good. C- 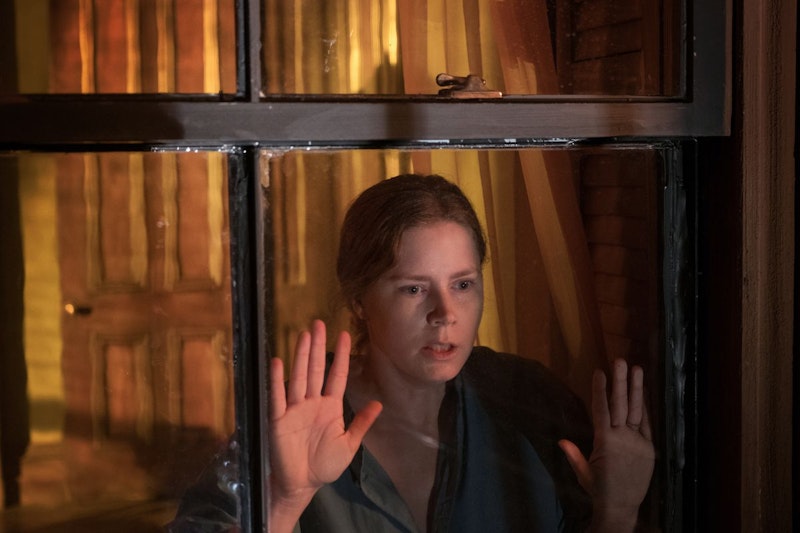 The Woman in the Window is an adaptation of a popular novel, featuring a top-notch cast (Amy Adams, Gary Oldman, Julianne Moore, Jennifer Jason Leigh). It comes from a director (Joe Wright) whose career has been uneven but is capable of delivering memorable setpieces. It was written by the great playwright Tracy Letts, who also appears briefly as an actor. And its plot is a riff on Hitchcock's Rear Window, a classic that’s inspired copycats for much of its nearly 70-year life.

But The Woman in the Window had a cursed route to the screen. The author of the novel, Daniel Mallory, was exposed by The New Yorker as having lied about numerous things, including having cancer. The film had a disastrous production, leading to reshoots, delays, and its sale from Fox to Netflix, where it sat on the shelf for most of the pandemic. The Woman in the Window was dumped on Netflix with little fanfare, the same month movie theaters are having a grand reopening. Did the film, despite all that, get salvaged into something watchable? No. It’s a ridiculous thriller, poorly-structured and indifferently directed, which wastes the talents of many people.

Adams stars as Anna, a psychiatrist who lives in a gorgeous Upper Manhattan brownstone and, following a personal trauma, is suffering from agoraphobia. She soon develops a Rear Window-like obsession with the family across the street, in which the father is Gary Oldman, and the mother is either Julianne Moore or Jennifer Jason Leigh (which woman is actually his wife is a matter of dispute within the plot.) Anna believes there's something untoward and violent going on. But is there really, or is Anna's mental illness, pill regimen, and heavy drinking causing her to imagine it?

Well-worn as the Rear Window tropes are, they’ve held up for nearly seven decades for a reason, while filmmakers of late have impressed with unreliable narration. The recent movie The Father, which dealt with Anthony Hopkins' character's dementia, found a creative way to subvert traditional film grammar in order to depict its protagonist's disorientation. But here, it's mostly just goofy, especially once it moves into ludicrous plot twists.

The Woman in the Window was directed by Joe Wright, the English filmmaker best known for ambitious historical dramas and literary adaptations, some of which hit (Pride and Prejudice, Atonement) and some didn’t (The Soloist, Anna Karenina, Pan.) He’s responsible for that great Dunkirk evacuation setpiece in Atonement that was better than anything in Christopher Nolan’s Dunkirk movie, while he also directed Oldman to his Oscar win, beneath a mountain of makeup in Darkest Hour. The direction here is somewhat inert, as Wright can’t find anything interesting to do with the singular location of a pretty house. And the writing, even in the hands of a capable hand like Letts, isn’t much better.

As for the actors, the nicest thing I can say is that both Adams and Oldman are better in this than they were in their Oscar-grubbing turns last year in Hillbilly Elegy and Mank, respectively. Julianne Moore only shows up briefly but gives probably the best turn in the movie. Also along the margins are fine actors like Brian Tyree Henry, as a cop, and Wyatt Russell, as a tenant, who the film completely wastes.

I wouldn’t be surprised if The Woman in the Window finds an audience on Netflix as a trashy Saturday afternoon watch that viewers will choose over four-hour true crime documentaries. But that doesn’t mean it’s good.