Eyes Wide Shut, the ongoing trial of Ghislaine Maxwell, and the poison that power brings. 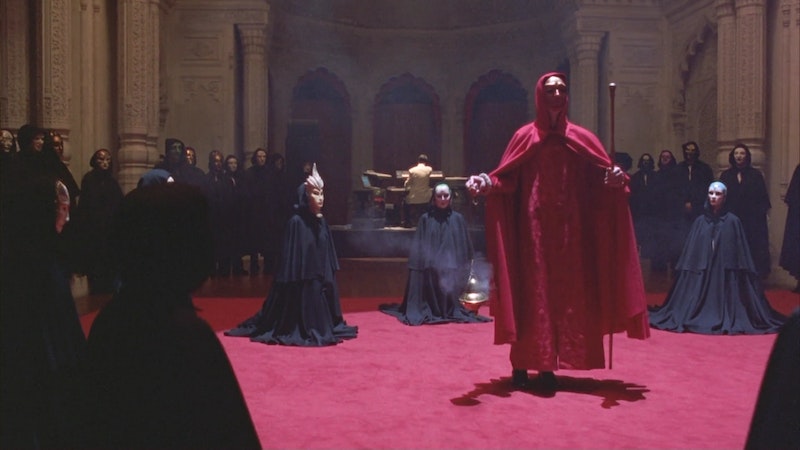 Last week, the jury in the Ghislaine Maxwell sex-trafficking trial turned down Judge Alison Nathan’s request to deliberate into Thursday. I don’t know if you’re allowed to do that, but one can hardly blame the jury for requesting a reprieve from the lurid details of the Epstein-Maxwell saga to be with their loved ones over the long holiday weekend. They may have gathered around the TV to enjoy that quintessential Christmas classic about one man’s dark night of the soul.

I’m talking about Eyes Wide Shut. Revolving around the secret sex rituals of the One Percent and brimming with occult symbols, Stanley Kubrick’s final masterpiece is the closest these jurors can legally get to talking about the case. Considerable ink has been spilled over the film’s relationship to the case (for the uninitiated, I recommend Rich Cohen’s “Behind the Mask of Corruption”). Kubrick’s true intent notwithstanding—some online sleuths allege the film’s many Mephistophelian motifs add up to an exposé of an elite pedophile ring (or would have, had the elites not murdered Kubrick and recut his movie), while others closer to the director insist he’d long wanted to adapt Arthur Schnitzler’s “Traumnovelle” and that he’d already finished the film when he died of a heart attack—the coincidences between the two are striking (particularly the print cameos in the film by real life New York Post reporter Larry Celona, who’d later extensively cover the Epstein case).

Still, the same way I doubt The Shining is Kubrick’s coded apology for faking the moon landing, I’m not sure I buy the theory that Eyes Wide Shut is an Epstein warning; like The Shining, Eyes Wide Shut is too big a house, with too many secret rooms and hallways, to limit to one fixed tour. Moreover, Eyes Wide Shut doesn’t need to be about Epstein to still get at the essence of men like Epstein and his co-conspirators, people with only one firm belief, per Cohen: “There is nothing I want that I can’t have, there is nothing I can do that I can’t get away with.”

If widely held enough, this belief is the death rattle of a crumbling empire, and one of Eyes Wide Shut’s many subjects is the American empire’s slow unravelling, a peek under the mask as seen through the eyes of Dr. Bill Harford (Tom Cruise) over one Christmas season. Like the Vienna of Schlitzner’s 1926 story, Kubrick depicts late-1990s New York City as a pre-Fascist culture in flux, Giuliani’s newly disinfected Manhattan (recreated on soundstages at London’s Pinewood Studios) now an overpriced playground for stealth perverts. The film’s Homeric production schedule began around the time Hillary Clinton did the macarena and ended not long after Bill Clinton’s impeachment trial. That trial’s Senate acquittal did little to assuage the public’s growing unease that affluent men were allowed to abuse their power with impunity, or that young women were unavoidable collateral damage in such scenarios.

In nucleomituphobe Kubrick’s vision, the elites’ decadence and hypocrisy is a radioactive poisoning of the well, illustrated by the thousands of white Christmas lights at Ziegler’s (Sydney Pollack) party, their ghastly grandeur blinding Dr. Harford and his wife Alice (Nicole Kidman) from the moral metastasis happening “where the rainbow ends.” The Christmas setting is one of the few liberties the director took in his otherwise faithful adaptation, and I wonder if he didn’t set it during Christmas just for the lights; Kubrick always found creative use of lighting sources within his mise en scène (Barry Lyndon’s candlelight, the pale glare of the TV set in The Shining), and except for the opulent mansion orgy, each darkened room that Dr. Harford visits during his odyssey is at least partially illuminated by stringed Christmas lights. As he continues to not get laid and realizes that his inquiries are as useless as the cryptic note states they are, the lights’ warm glow serves as a constant, taunting reminder of the impossibility of bringing certain matters into the light.

As fascinating as the film's possible connections to a real-life cabal of powerful pedophiles might be, this limited reading feels unfair, to the film and viewer. Eyes Wide Shut is much more accessible than that, a film for anyone who ducks away from their families during the holidays to go drink at a bar alone; a comedy about a man who has everything (played by a man who has everything) and still wants something else, something that’s just out of reach; a man who insists to his wife that he loves her and for that reason would never cheat, then the moment she confesses thoughts of infidelity, completely abandons ship to cheat on her; a man for whom the search for the truth behind what really happened—to the call girl, to Nick Nightingale, to knows who else—is inseparable from superficial societal aspirations. (What disturbs Dr. Harford more? The conspiracy he uncovers, or that he’s left out of the conspiracy?) It’s a Christmas movie about light and darkness, life and death, waking life and dreams: all hallmarks of holiday classics.

As America entered its first holiday season after 9/11, George W. Bush told people to go shopping, a simpleton’s panacea for a national psychic trauma. Similarly, after the damage done by their deepest desires, the Harfords’ first step toward saving their marriage is taking their daughter Helena to a toy store. “The important thing is we’re awake now,” Alice tells Bill, surrounded by stuffed animals and train sets; they agree to fuck as soon as possible, while men from Ziegler’s party may or may not be kidnapping Helena. Multi-colored Christmas lights twinkle in the background, watching over Bill and Alice like the eyes of our overlords.