Don’t Look Up has received nasty criticism not because it’s particularly bad, but very depressing. 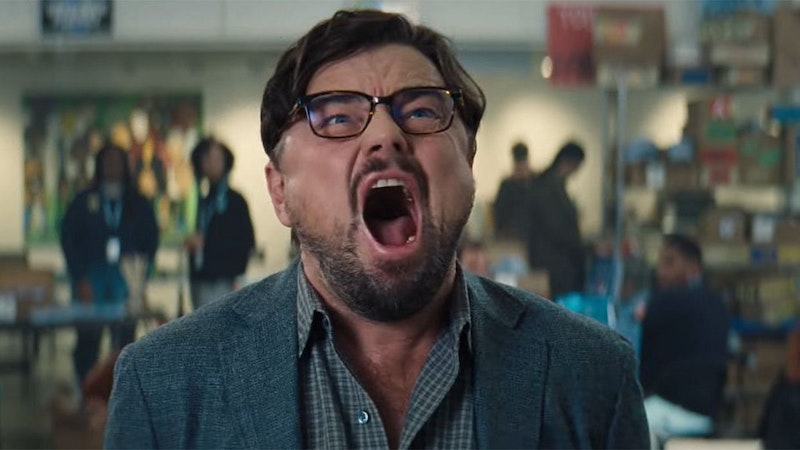 Ever since Adam McKay’s Don’t Look Up was announced and previewed in 2019 and 2020, it’s been getting kicked around like a soccer ball, alternately made fun of and dismissed, already deemed beneath “us”—whoever “they” are. I’m not sure when the backlash on McKay began, if it ever did (and Succession certainly doesn’t hurt), but the comments I’ve seen regarding Don’t Look Up have been particularly nasty: “Humanity’s response to climate change is infuriating and hilarious enough. You didn’t need to come up with a belabored, useless comet metaphor,” from Bilge Ebiri is typical, and reveals what’s pushing peoples’ buttons about this movie: it could happen.

I watched Don’t Look Up on Christmas Eve not expecting much (McKay has never been a “comedic genius,” contrary to Dave Ehrlich, another Don’t Look Up despiser), and I don’t understand what has made so many people reflexively knock this movie off as something not worth watching or considering, as if it were dangerous and not merely a decent but overlong apocalypse comedy. Ebiri’s tweet is revealing, because I think the real possibility of a comet hitting the Earth does freak people out regardless of the odds, and many movies about the end of the world get this kind of reaction. People see it then complain that they don’t like to see it. The Day After Tomorrow faced similar criticisms in 2004: “too broad,” “sensationalistic,” “ridiculous.”

That was a movie specifically about climate change. I realize that the press releases and promos for Don’t Look Up compared the movie’s politicians and leaders denial and incompetence in the face of certain doom to the climate crisis, and that this has been ingested and repeated by everyone writing about the movie, but if you didn’t know any of that, you’d never say this was a climate change movie. It’s an apocalypse movie: the world is ending, or is going to end, and only a few people know about it. A familiar, potentially popular but risky, premise. Society falls apart, and people show themselves to be who they really are.

Leonardo DiCaprio plays an astronomer at Michigan State, along with PhD candidate Jennifer Lawrence. She makes a horrifying discovery one day: a comet is headed directly for Earth and will make impact in about six months. DiCaprio checks her math, has several panic attacks, and then starts making movies. They quickly end up talking to the President (Meryl Streep), a Republican who doesn’t care about the comet and doubts the credentials of these Midwestern people who say a “planet-killing scenario is inevitable.” Streep and her coterie’s denial of certain destruction isn’t a specific metaphor for climate change denialism, but any social problem: I saw this as much more of a movie about the world’s response to the coronavirus than anything else, but it’s kept wide and non-specific enough to stand on its own.

Streep and her team, including a hilarious performance by Mark Rylance as a bizarre billionaire, spin the comet as a good thing, and Lawrence’s parents even refuse to let her in the house once the media turns against her: “Your father is for the jobs the comet will bring.” Broad, yes, but what’s the problem? This guy made movies with Will Ferrell for years. And, like time travel, any end-of-the-world story is going to be affecting because it’s universal. Watching this movie and putting yourself in the position of not even the main characters but all of the countless employees and lackeys and people walking down the street who don’t freak out until the comet is minutes away and all of the governments have failed them.

Despite a multi-million dollar ensemble cast including Lawrence, DiCaprio, Streep, Cate Blanchett, Timotheé Chalamet, and Jonah Hill, Don’t Look Up never leaves comic book land, and while its sledgehammer subtlety has been criticized, this is nothing new for McKay (at least this time there aren’t nearly as many pop-up factoids and joke title cards). Remember, this is the guy that directed Anchorman and Step Brothers, two good comedies, and The Big Short and Vice, two bloated but okay political satires—well, more like the cinema version of Vox “explainers.” Don’t Look Up is better than McKay’s recent acclaimed “serious” movies, and by the end, when the comet finally hits, the film is genuinely moving. Not for long, but I never felt any vitriol or boredom watching this movie. I think most people aren’t willing to admit they don’t respond well to things that are “ultra-depressing,” in the words of one California critic.