The film Don’t Look Up portrays morally righteous voices “screaming into the void” about imminent catastrophe. 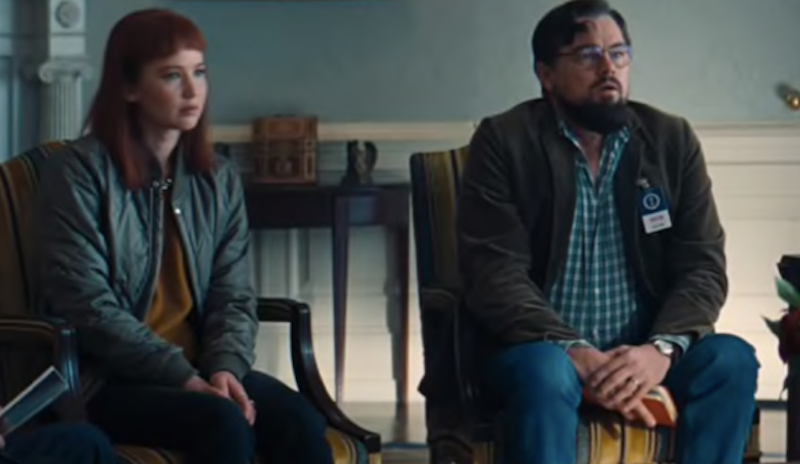 As a life-threatening comet hurls toward earth in the film Don’t Look Up, an exasperated Dr. Randall Mindy says, “We really did have everything, didn’t we?” This phrase appeared to resonate with many climate scientists and activists who saw the film as mediating for their frustration when communicating the future and current impacts of climate change. In response to this scene, climate Scientist David Ho tweets: “This line from #DontLookUp perfectly encapsulates what is special about earth, and why we should fight for it. Evolution of intelligent life requires a planet that’s continuously habitable for 3 or 4 billion years. That such a planet exists is a miracle.”

On the social media platform, Dr. Ho’s position resonated throughout the science and environmental community with many expressing similar sentiments. To interpret this adulation, however, is to understand that the ideological position of needing to manage or save the earth stems from a perspective where humans are the protagonist in the story of evolution.

Throughout the history of past civilizations, environmental catastrophes have led to the demise of societies with complex socioeconomic structures such as the Mayans, Anasazi, and Mesopotamians. The difference between past collapses and today’s environmental catastrophe is how humans perceive nature. We exist in a reality where humans are separated from nature, and I don’t mean this in some hippie bullshit way, where we need to get back in touch with mother nature. Rather, to say we’ve created an unnatural environment and reality, and this human manifestation is what we interact with. This is summed up by a quote from Slavoj Žižek, “The power of human culture is not only to build an autonomous symbolic universe beyond what we experience as nature, but to produce new ‘unnatural’, natural objects which materialize human knowledge. We do not only ‘symbolize nature’, we—as it were—denaturalize it from within.”

In today’s mechanized and unnatural world, nature is viewed as entertainment, something pleasing and something to be consumed. It’s the same position we share with more traditional forms of entertainment. This is because we exist in a world that’s denaturalized. The belief in being able to manage our environmental catastrophe is predictive because of the relationship humans have with nature. Nature as it exists for us is on the consumptive level. We either go into nature and view it as aesthetically pleasing, or extract resources from it to fuel the socioeconomic machine of civilization. A denaturalized environment is one that can be a managed and controlled. When a comet plummets to earth, the need to save the planet and its inhabitants is from a class position that has always been able to manage their crises. A position that arises from an egotism to make earth tolerate humans just a little bit longer, so long as we do it “sustainably.”

Don’t Look Up perfectly portrays the scientists. As morally righteous voices “screaming into the void” about imminent catastrophe. It captures the essence of the concerned citizen by expressing their understanding of reality as being objective idealism. Believing that if enough people know of the pending doom, and are educated enough about it, then the correct path to managing the security and future catastrophe can succeed. The issue with idealism is that it perceives progress as being concepts and innovative thinking, rather than historical contingency based on institutional power dynamics and structures. Following this path, the movie and its consumers view the villain as greedy corporations, corrupt politicians, and hyper-consumerism rather than the structure that upholds them to exist.

The supposed anti-capitalist message is precisely capitalist ideology as described Žižek and Mark Fischer, which is the overvaluing of belief. So long as you morally believe capitalism is exploitative and you personally know it’s bad, you’re free to continue to participate in capitalist exchange. Holding an antithetical position against greedy corporations and corrupt politicians provides the self-reflection needed to support capitalist realism and reaffirm the overvaluing mental activity of belief. The position that one is morally correct and superior with their values is the exact ideology of our capitalist society, where individuals have freedom of thought and expression, at the expense of any collective comradery. Thus, when collective action is wanted, for individual security (e.g., masking and vaccine mandates), the excess expression of one’s individual self, collides with its opposing force (i.e., someone else with opposing views), the result is both sides viewing their position as true moral righteousness and irreconcilable conflict. This is the inevitable conclusion and result built from a society that reaffirms its existence and values built from a denaturalized world.

Don’t Look Up has provided a platform for the concerned citizen about climate change to “feel seen.” Our current unmitigated environmental catastrophe can continue unabated because pressure can be released by expressing individual thought against the repressive system. It can short-term appease insecurities and anxieties about future doom looming ahead because it expresses the idealist resolution to conflict. The threat of looming environmental catastrophe is one that challenges the subjectivity of an individual in a classed society. It prevents them from being masters of their own world which is needed for individual security and comfort. It’s the uncertainty, of being able to control, and relinquishing of the narcissistic need to be correct and manipulate their reality that is the threat. From this perspective, the solution can only be, how do I convince others and political leaders to believe what I believe and perceive my world view as being correct.