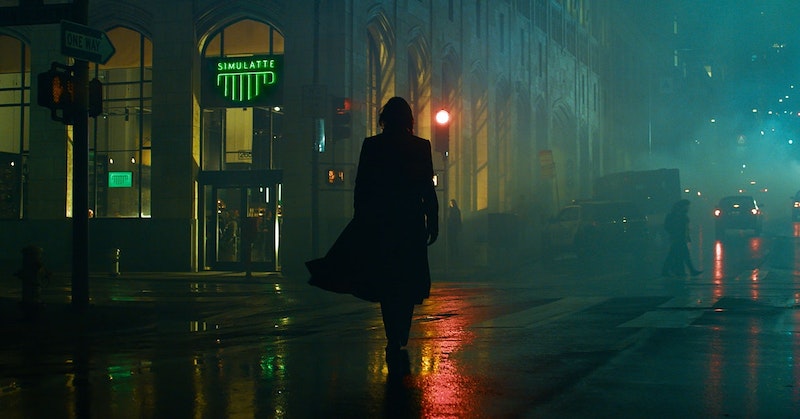 I don’t know why, but it didn’t strike me how long it’s been since the original Matrix trilogy until I was already watching the fourth one, out last week and again directed by Lana Wachowski (Lilly Wachowski stayed on as co-writer). Since The Matrix Revolutions came out in November 2003, the Wachowskis have turned down annual offers from Warner Brothers to make a new Matrix, and it wasn’t until their parents died that they had a change of heart. “I couldn't have my mom and dad... yet suddenly I had Neo and Trinity, arguably the two most important characters in my life. It was immediately comforting to have these two characters alive again, and it's super-simple. You can look at it and say: ‘Okay, these two people die, and okay, bring these two people back to life, and oh, doesn't that feel good?’ Yeah, it did! It's simple, and this is what art does and this is what stories do. They comfort us and they're important.”

Lana Wachowski is right, and I was both relieved and frustrated by the movie she made to mourn her parents and her own franchise, one so popular and ubiquitous that nearly every aspect of it, particularly “redpill/bluepill,” long ago seeped into the groundwater of world popular culture. The Matrix Resurrections isn’t a new Matrix movie so much as it is a movie about if there were a new Matrix movie. I’ve seen a number of people compare it to David Lynch’s career re-examination and expansion in Twin Peaks: The Return, and while superficially it’s there in places, it’s not developed at all. Lynch’s revisit was an intense meditation on evil and the futility of “good people” in the face of colossal, world-rending destruction; Wachowski’s look back at The Matrix, her place in it, its place in the world, and what made that first movie so amazing, starts off like a proper headfuck and just ends up dreary and dull.

For the last 20 years, Neo, aka Thomas Anderson (Keanu Reeves), has been back in The Matrix. In this version, he’s a world famous game designer responsible for The Matrix trilogy. In Resurrections, shots from the first three movies are shown as if they’re video game clips. During a brainstorm in Anderson’s video game company, young employees toss around words and phrases that they associate with “what made The Matrix important”: “bullet time,” “trans politics,” “techno futurism,” “postmodern theory,” and more. I wish the movie kept on this path; instead, it quickly moves into… yet another attempt to make a new Matrix movie. Didn’t you watch the first hour of your own movie? Or the first two sequels? You can’t top that first one!

After only an hour, Anderson has become Neo once again, saved by a new generation of techno people outside the Matrix who worship Neo, Morpheus, and Trinity, who goes by “Tiffany” in this current version of the Matrix and is the object of the rest of the movie’s quest. As soon as Neo gets pulled out of that pod and starts looking for Trinity, the movie becomes even more dull and unenjoyable than the previous two sequels, which must benefit with hindsight. Still, as much as the super-fans and the Wachowskis themselves insist, it was never the mythology or the philosophy that made The Matrix what it was, and it certainly wasn’t the love story between Neo and Trinity.

I understand Lana Wachowski’s motives in making this movie, and I’m glad she did it this way rather than just another new action movie. It’s a weird, misshapen work that millions of people will see. It’s done in a way I find really interesting; I just wish it was better and more sustained. And what’s with the garbage CGI? I swear the graphics in the original trilogy were much better. This was like watching a video game—Abel Ferrara’s Siberia had better CGI.