How I Learned to Stop Worrying and Love Fascism

The Cold War is over, but Dr. Strangelove still salutes. 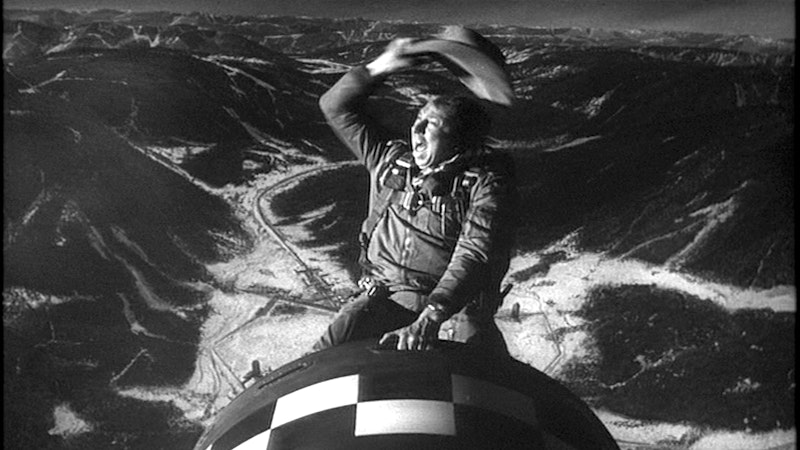 This is the final entry in a series of posts on 1960s comedies. The previous post on Putney Swope is here.

Stanley Kubrick's Dr. Strangelove is a Cold War film, and 50 years later its particular paranoia feels dated. The Soviet Union is no more, and it fell to pieces without a nuclear conflict. Russian interference in US elections is terrifying in its own way, but our current apocalypses are slow rolling, and less all encompassing, than that envisioned in Kubrick's film.

So, to some degree, Dr. Strangelove seems too pessimistic. But its unconscious optimism is even more anachronistic. As all film buffs know, the plot of the movie hinges on the paranoia of Brigadier General Jack D. Ripper (Sterling Hayden), who unilaterally commands airplanes under his command to drop nuclear bombs on targets in Russia. The bulk of the narrative is about saner, more responsible people up the chain of command trying to stop the resulting conflagration from destroying all life on earth.

In particular, the president of the United States, Merkin Muffley, played by Peter Sellers, is notably calm, level-headed, clear-eyed, and willing to take dramatic steps to ensure peace. Muffley quickly contacts the Russian ambassador, and makes a decision to reveal top secret air force plans in order to allow the Russians to shoot down American planes. He's smart and determined enough to face down and contravene his own top military staff. He also actually cares about the threat of massive loss of life.

Given our current president, it's obvious that Kubrick wasn't nearly cynical enough. The director could imagine an irresponsible, violent man in a high military position, but couldn't imagine that irresponsible violent man as Commander in Chief. Trump wouldn't have bothered to try to recall the planes; he would’ve just run for a bunker as soon as he felt he was in personal danger. Maybe he would have notified Ivanka and Jared, but it's hard to imagine him even putting on a pretense of caring about the fate of the rest of the world.

But while Strangelove gets the Cold War and the president wrong, there are some things in the movie that still ring true. The most obvious is fascism. Dr. Strangelove himself is a former Nazi turned American scientist played (once again) by Peter Sellers. Strangelove keeps inadvertently referring to the president as "Mein Fuhrer," and his right arm sporadically eludes his control and shoots up in a Nazi salute.

American sympathy for fascism isn't just embodied in Dr. Strangelove, though. It's also central to Jack D. Ripper, who’s obsessed, like the Nazis, with purity and corruption. "I can no longer sit back and allow communist infiltration, communist indoctrination, communist subversion, and the international communist conspiracy to sap and impurify all of our precious bodily fluids," he mutters, and goes on to feverishly explain that he doesn't allow women to drain his strength.

Kubrick is prescient not just about fascism, but about the reaction to it. Most of the people in authority don't embrace Ripper's fears about bodily fluids. But they don't exactly oppose him either. In the face of a terrifying worldwide crisis, good upstanding heroes don't take a firm stand against evil. Instead, they equivocate, make excuses, or cover their asses.

The iconic figure here is General Buck Turgidson, played in a tour de force of self-parody by George C. Scott. Turgidson doesn't want the world to end; he's not insane like Jack Ripper. But he's obsessed with maintaining an advantage over the Russians professionally, and distracted by attractive young women personally. Preventing nuclear annihilation is on his list of priorities, but it's not at the top.

When the planes start flying, he argues that the president should back them up with a full-scale strike, to ensure that the Soviets are defeated and the US only loses millions of people rather than tens of millions. Similarly, when the worst happens, and the end of the world is nigh, Turgidson is cheered at Strangelove's suggestion that important military personnel find some mine shafts to hole up in, with lots of pretty young women to ensure the continuation of the species. Armageddon, to Turgidson, doesn't look so bad if it's accompanied by sexual slavery. And if the US comes out of the mineshafts in a position to wipe the Russians off the barren earth, so much the better.

American films love to show people coming together in the moment of extremis; facing the end of the world, the partners who hated each other find common ground, the irascible general reveals a heart of gold, the citizens band together and save George Bailey's bank. But Dr. Strangelove posits a bleaker but more likely scenario, in which looming destruction empowers the worst people and leaves everyone else scrambling for whatever petty advantage they can get. Even outright heroism ends up twisted into its opposite. The cowboy hat-wearing bomb captain, under the misapprehension he's taking revenge for a Soviet first strike, fights through adversity and hardship, gallantly sacrificing himself as ordered to drop his payload and destroy the world.

American courage, ingenuity, and scrappiness don't save us from fascism. They just make us implement fascism with greater courage, ingenuity, and scrappiness. When everyone is burned to ash around us, we won't cry or rage. We'll pat ourselves on the back, and look around for more atrocities to implement. Three hearty cheers, boys, for genocide! That's a rallying cry that rang in our ears in the 1960s, and still inspires us today.