Desert Messiah: The Meaning of History in Frank Herbert’s Dune

To Herbert there’s really no such thing as progress. 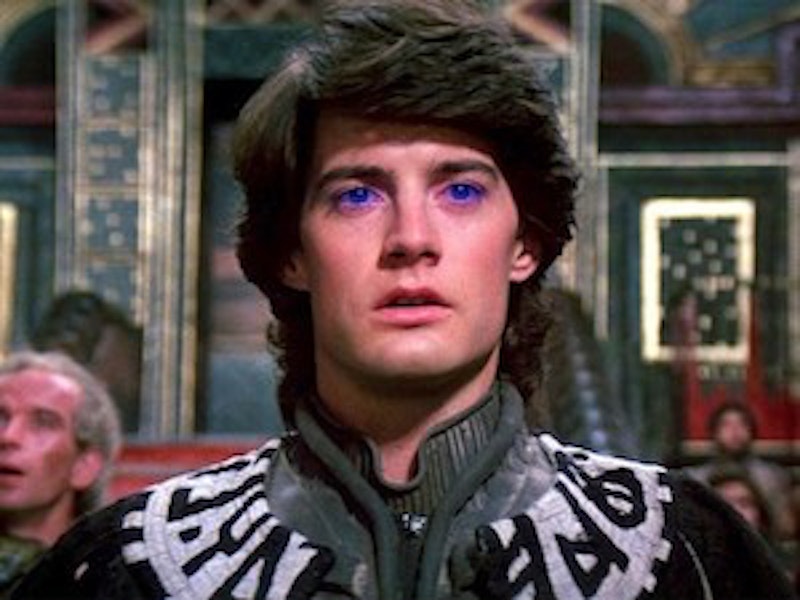 Why can’t somebody make a decent film out of Dune? Frank Herbert’s book has been around for over 50 years, and still sells by the truckload. It has attracted brilliant directors, including Alejandro Jodorowsky and David Lynch. Yet, to date, we have just the glittering pieces of an unfinished masterwork (Jodorowsky) and what is, unquestionably, the worst movie David Lynch has ever made. (Oh, and a forgettable miniseries.) The reason that every attempt to film Dune miscarries, and there is a very good one, is actually buried deep in the book’s anguished heart. Dune is a hopelessly contradictory work, frayed by the contradictions of history itself in a way that only literature can contain.

Set thousands of years in the future, Dune at first appears to be a book obsessed by technology, putting every conceivable gadget at its characters’ disposal. Some of these are just re-labeled versions of technology that existed in 1965, such as ‘thopters (helicopters) and mechanized quarrying machines. A few are genuinely futuristic: the fancy deflector shields, for example, and interplanetary starships that create something akin to wormholes.

The re-labeled technology raises an important historical point: something with a long, familiar history can seem magical and foreign in a new context. ‘Thopters seem more advanced than helicopters because they’re navigating around sandworms and “spice.” Moreover, the futuristic shields that protect important citizens in Dune are just quantum versions of medieval armor in an atavistic monarchy. It’s no coincidence that space travel and armor shields are both powered by the fictional “Holtzman effect,” which folds spacetime, bridging the past and the future. Everything old is new again: the characters lunge at each other with knives and poisons like Italians under the Medici while the evil Baron Harkonnen quotes verbatim from Machiavelli.

In fact, a major reason that Dune seems more technocratic than its technology might suggest is that Herbert writes about people as if they, too, were complicated machines. They’re subject to endless varieties of mind control, including “the Voice,” “imperial conditioning,” propaganda seeding, and post-hypnotic suggestion. Behaviorism was well-established by 1965, but Herbert is disarmingly matter-of-fact about a future where it reigns supreme. Even worse, many of the weirdest characters are the product of eugenics and collective rearing, including the Bene Gesserit witches, Mentat consultants, Sardaukar militiamen, and the Guild spaceship navigators. Herbert disguises as the remarkable accomplishment of millennia what we currently know and deprecate as slavery, kidnapping, and duress. He has no problem breaking a few eggs like this in order to present an interesting omelet.

On the other hand, the old and the new are not always identical in Dune. Sometimes, they go to war. The nomadic, disenfranchised “Fremen” go to war against the hyper-modern armadas of the Harkonnens and the Emperor. The Fremen serve under Paul Atreides, a noble Duke turned desert messiah. Paul maintains his humanity, despite the pressures of waging a constant guerrilla war, thanks to his romantic relationship with the Fremen woman Chani. Love, which in Dune is as old as the hills, dissolves the chains of conditioning and control. Love breaks Dr. Yueh’s “imperial conditioning,” leading Lady Jessica to disobey the Bene Gesserit, and later emancipates Duncan Idaho’s weaponized clone. Ritual and faith, like love, stand as additional bulwarks against modernity, from the ritual combat among the Fremen (which preserves their meritocracy) to the traditions of the Landsraad and kanly(which prevent the Emperor and Guild from consolidating power).

Right at the intersection of this complicated theory of history are the sandworms and the spice. The sandworms, a primitive form of instinctual life, are vital to the technologies of the Guild and the Bene Gesserit, and so they’re allowed to run rampant over Arrakis and wreck its ecology. The Fremen are so powerful and hardy because of the sandworms’ desert; they’re therefore modernprimitives, as their space-age stillsuits attest.The spice that the sandworms produce is addictive, and without it, addicts perish; equally addictive is the luxury and sophistication of consciousness that modernity produces, and we’re addicted to both. But everything goes back to those disgusting, phallic sandworms and their priceless offal: modern life can pervert the instincts, producing Mentat prodigies and debauched Harkonnens, but it cannot do away with them. The snake bites its own tail: the eugenics program of the Bene Gesserit is undone by Jessica’s Bene Gesserit son, and the plans of the Emperor and the Baron are foiled by the people of the desert they helped create.

To Herbert, then, there’s really no such thing as progress. He’s fascinated by the sacrifices, tortures, and revolutions that humanity can impose upon itself, and the freakish technologies of control and exploitation that civilization brings to bear. He’s equally fascinated by the destabilizing recurrence of perennial faiths, instincts, and passions. He joins the Fremen in celebrating these as liberators. The thing that Paul sees, when he goes into a visionary trance, is that you must travel backwards in time to be the fulcrum of the world. You must wear old masks and breathe life into old rituals. The Bene Gesserit are frightened by this truth, and turn away from it; they only look forward, into the future. Ironically, this is exactly what prevents them from seeing the cycles of history for the circle that it is. They’re nonetheless right to regard Paul as insane for putting all his hopes in things that have already been tried.

The reason Dune transfers badly to the screen is the same reason its sequels are all second-rate (at best): Dune celebrates Paul’s rise, but he is a false prophet. Herbert ends his first book, therefore, as he must—with the moment of revolution. In that moment, the greatest hopes of the past seem to appropriate everything that is worst about “progress” and give it meaning as a condition for massive social change. Herbert was writing, after all, in the 1960s, when a primitivist counterculture was launched by the combination of modern war, modern drugs, and modern media. Paul tries heroically to solve the riddle of progress and break the wheel of dharma. We grow accustomed to hearing his thoughts in the book, and imagining Arrakis as a promised land, a place of balance and delight. But these are the mirages that men see when they venture deep in the desert, and swallow its poisoned draughts. Whenever the cameras start rolling on another director’s attempt to capture Dune, they speak to what is, not what could be. The desert is all that remains.