On the other hand, we’re all going to hell. 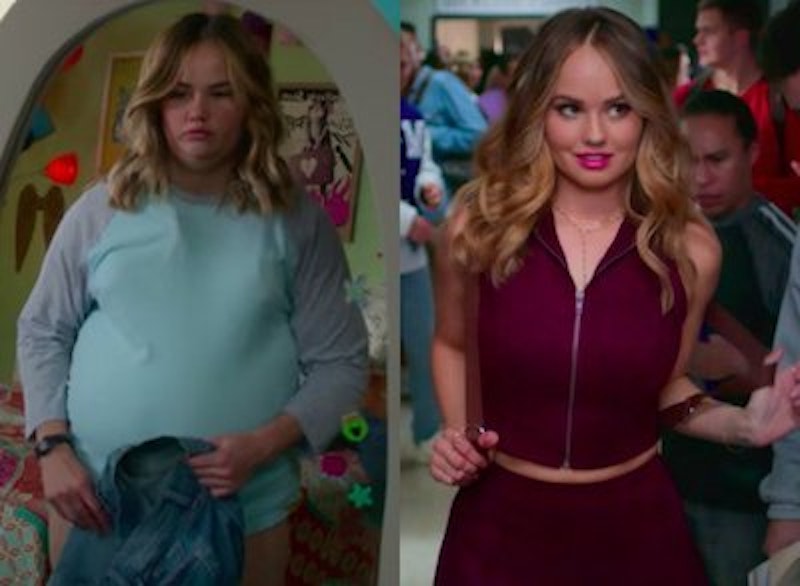 The Nazis demonstrated in Washington, and Netflix premiered Insatiable. The resultant voicing of blue state America’s moral outrage has caused skin to shred and ears to burst. White supremacy is one issue that stabs at the bowels of our public moral order, and apparently another is body shaming. I must self-check to see that I still hate Donald Trump and the Nazis, because Insatiable didn’t strike me as all that bad. The program isn’t top of the line, but unlike Trump it’s quick moving and good looking. Also unlike Trump, it’s trying to make the world better and not worse. But it’s hated, which makes for an interesting situation. This oddity was meant for the very people who are disgusted by it.

Insatiable is a 45-minute combination of black comedy and soap opera about a girl (Debby Ryan) who used to be fat and despised but now looks hot and great. The program’s enemies hate this before-and-after and see the show as propaganda for eating disorders. This complaint greeted the show’s trailer, followed by many others when critics got a look at the series proper. “It doesn’t merely traffic in stereotypes about fat people; it does the same thing with regard to the LGBTQ community, Southerners, women, Christians, conservatives, African-Americans, and probably some other groups” is typical of the catalogues produced by Vox and NPR and The New York Times and Vulture and Jezebel and the Daily Beast. Along with the show’s foulness comes crumminess. “Story elements are introduced and then abandoned,” says NPR. “Jokes fall flat, flatter, flattest.”

Or so the song goes. Lauren Gussis, the woman who created Insatiable, has had duncehood crash upon her. These days there’s a flock of pointing fingers ready to dive down on any of us, and for Gussis the sky is now black. As a result she has flung herself before Vanity Fair and The Hollywood Reporter, pleading her case. This case has a blue state feel all its own and is heavy on therapy culture. Gussis talks about her past eating disorders, and about the foolishness of her show’s heroine in chasing hotness, attention, and revenge. “Every single person who was upset, I wanted to hug them and tell them I get it and that’s what I’m going for,” she said. She’d just been trying to help. She’d been trying to get the good messages out there, just like she was supposed to. “As a man I have no right to tell you what to do with your body,” says the show’s male lead to its star. It’s like he’s positioning a product label for the camera.

No matter, Insatiable and its maker have been cast out of the fold. Many of the reviews mention pedophilia, so points like the difference in age between male lead and female star may be the number two culprit for the shunning. Bob Armstrong (resourcefully played by Dallas Roberts) is a small-town lawyer in his 40s who’s devoted to coaching teenage girls in beauty pageants. Debby Ryan’s character, the newly gorgeous Patty Bladell, is his ticket out of some rough times. Accordingly, the heart of the show’s action is a hot 17-year-old girl hanging out with a middle-aged man whom she doesn’t know that well. Furthermore, the girl wants to get the geezer into bed. This is for psychological reasons that make some sense: dynamited out of her old identity, she’s eager to attach herself to somebody who might give her a new one.

Otherwise the show is at pains to keep the attraction as implausible, and therefore theoretical, as possible. Poor Bob’s bald spot and flabbiness are played up, and we see again and again how involved he is with his wife (Alyssa Milano, pitching hard as one of the program’s many cutthroat bitches). The crowning touch, the second-by-second reminder that nothing will happen, is that this husband and father is played in flaming style, if you’ll pardon the phrase. Rarely has TV seen so many sherbet-colored sweaters knotted loosely at the throat, or such prim crossings of the knee and tight-angled flips of the hand.

Roberts keeps up this barrage of mannerisms from the start and redoubles it as his character nears a late-season rendezvous with bisexuality. He’s complemented by the sleek Christopher Gorham as Bob Armstrong’s dread rival and eventual lover, the have-it-all Bob Barnard. This other representative of middle-aged malehood, also a husband and father, flaunts a beautifully maintained torso and repeatedly takes off his shirt in circumstances that call for a suit and tie. Husbands and fathers aren’t what they used to be; according to Insatiable, swishing and hootchie-koo are now key parts of what they give the world. Critics of the show have little to say about this, which strikes me as a remarkable case of the dog not barking.

To get very grand, for a while now society’s rules have been giving way in the face of social atomization or else personal freedom, depending on your preference. During the past century the process has become viewable by anybody who spends a few decades alive and conscious. We’ve been living through time-elapse photography, and the process is only speeding up. Insatiable, to change metaphors, shows us familiar rules set on blend. Manhood is turned inside out, and adults and kids are presented as potential or actual fuck partners—for even if Bob Armstrong and young Patty aren’t going to do it, the program is more lenient regarding Bob’s son and a local mother (the beautiful Michael Provost and rather strenuous Arden Myrin). And if non-legal girls can’t be fucked by the grown-ups, they can be simulated for display before an adult audience.

Like many high school shows, Insatiable has people in their 20s playing kids. Unlike the high school shows I remember, this black satire wants adults to watch it, and the adults get a good look at what the pseudo-children have to offer bodywise. I’d be a liar if I said I didn’t appreciate the sight of Debby Ryan, 25, (she appears to be a pout hanging between two bombshell cheekbones and a pair of greater bombshells below), or of the flanks and midriff presented by Erinn Westbrook, 27 (she plays a pageant rival to Patty, one who also has to lure the hapless Bob into a bedroom). But let’s recognize the game being played.

Above all, when presented by Insatiable any given family would appear to be an arbitrary circle drawn about a clump of warring dots, with these dots making up the show’s version of humanity. Insatiable gives us all against all, to the point that Bob Armstrong must wonder if having sex with his new-found male love is just the ultimate in getting screwed by a rival. American television has been doing great things with cynicism since The Sopranos came along. Even so, we may have reached a terminus now that Bob’s soul has been breached via his butthole.

These sound like complaints, but they’re meant as diagnosis. Insatiable is littered with dorky jokes and noisy performances, and apparently it has struck just the wrong note during this time of cultural flux. But it’s fun. Walt Fraser’s cinematography, Amy Parris’ costumes, and Kevin Hardison’s art direction create a flaring but controlled riot of colors that makes the screen come alive. The plot twists include a number of surprises, and the story pokes again and again at the central disjuncture of our time. “You always have to make it about you,” one character will say to another, and “You’re such a narcissist.” Well, they are and we are. Insatiable gives us a live-action cartoon drawing of our culture’s rather uncomfortable shape. The program is set in a school where teachers barely exist and classes are never mentioned. The kids are gathered in one place just so we can see the heroine being applauded or (more often) condemned. The program’s adults spend their time trying to engineer victories in beauty pageants just so they can feel like winners. Nothing is accomplished, everything is for purposes of display, and behind every face awaits an abyss of dread—who knows if the crowd will let you keep your self-respect?

Finally, let’s note that the program is called Insatiable and it’s meant for binge viewing. Some might call that irony, but really it’s congruence. In fact Insatiable and the clamor against it seem like two edges of the same sunken phenomenon. Morality takes the form of making noise in the press or on social media so that your righteousness can be admired. This collective noise is the opprobrium dropped on Lauren Gussis for creating her oddball series. I prefer Insatiable to the noise. If nothing else, it’s a markedly more entertaining specimen of today’s pixilated, decentered, floundering age.