For such a remarkable story, this documentary feels padded at 96 minutes. B 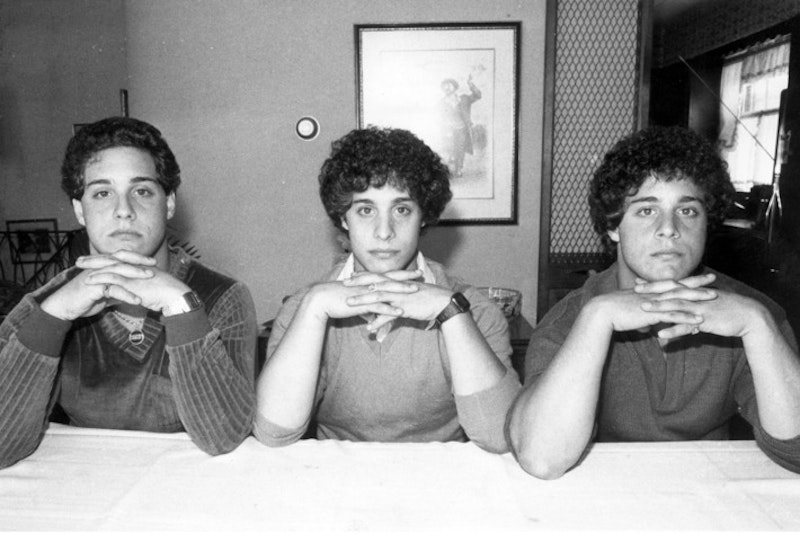 Director Tim Wardle on his new documentary Three Identical Strangers: “The thing with this film is that at a certain point, there are things that I generally avoid talking about too much… After the film’s premiere at Sundance, I saw some of the reviews, and even if they were generally positive, I think some of them gave a bit too much away. Some of the reviews were just descriptions of the story, and not even reviews of the film. And I’m sure that there will be some people who’ll appreciate that, but I think this is a story that benefits greatly from a certain degree of discretion beforehand.”

“Stranger than fiction,” “if it were a movie I wouldn’t believe it,” every cliché applies here, because you could get someone reading the life stories of Bobby Shafran, Eddy Galland, and David Kellman directly into a camera for 90 minutes and come out with a compelling film. Wardle had an abundance of miracles, coincidences, euphoria, tragedy, and sinister conspiracies to work with here, but for the most part, Three Identical Strangers stays out of the way of its incredible story.

I won’t recount the plot here, but know that Bobby, Eddy, and David were identical twins separated at birth by Louise Wise Services, a New York adoption agency. Born on July 12, 1961, they were separated and placed in homes of varying socioeconomic backgrounds: Bobby the affluent, Eddy the middle class, David the working class. They found each other only by the slimmest of chances in 1980 when Bobby showed up for his first day of college and got called “Eddy” by every stranger he saw. They met up, freaked out, and called an editor at Newsday who paid for a plane to get a journalist out there to confirm that they were for real ("That was back when we had money.") It snowballed from there and David got in contact with the other two after the story had been reported in the New York Post.

It gets dark: Eddy killed himself in 1995, and the surviving brothers suffer from similar bouts of depression and anxiety. They weren’t the only twins separated at birth by Louise Wise Services: for 20 years, Peter Neubauer of Yale University conducted a study that aimed to settle the “nature vs. nurture” debate once and for all. What he and his associates did was inhuman, “unconscionable” in David’s words: though most of the subjects never reunited with their siblings, those that did found the parallels in their lives striking, particularly their issues with mental health.

In any case, the study was shut down shortly after the triplets found each other in 1980 and the heat was on. A particularly chilling moment in the middle of the movie has a recreation of a meeting the three sets of parents had at Louise Wise headquarters. They were furious and couldn’t believe the adoption agency wouldn’t tell them about their siblings. They gave some bullshit answer and hurried the parents out the door. But one of them forgot his umbrella, and when he went back in to get it, he saw the Louise Wise people popping champagne and celebrating, “as if they had just dodged a bullet.”

Government conspiracies, psychological studies that veer into Third Reich territory, sealed records, tight-lipped associates, and unanswered questions? This could be a mini-series. Yet Wardle’s documentary feels padded at a brief 96 minutes. There’s plenty of extant archival footage of the triplets going on The Today Show, The Phil Donahue Show, and other early-1980s morning programs getting softballs like “Do you finish each others’ sentences?” and “Do you all smoke the same brand of cigarettes?”

These segments presumably lasted at least 10, maybe 20 minutes. Even five! Yet Wardle reuses the same two or three questions late in the film, to emphasize… what exactly? By that point we’ve moved passed the initial gee-golly part of the story, even past one of the brothers’ suicide, and deep into Citizenfour territory. Three Identical Strangers just goes totally off the rails in its last 15-20 minutes, marring an otherwise excellent documentary.

It doesn’t help that there is no resolution—yet. At least now the pressure is on: “Yale Must Act To Reveal The True Stories Of Other 'Identical Strangers'” It may just be a good movie that could’ve been better, but it would be amazing if its success actually leads to Yale releasing the records of its vaguely Nazi-ish experiment before 2066.