Film Review: BlacKkKlansman Packs in a Lot of Ideas, But Doesn’t Quite Pull Them All Off 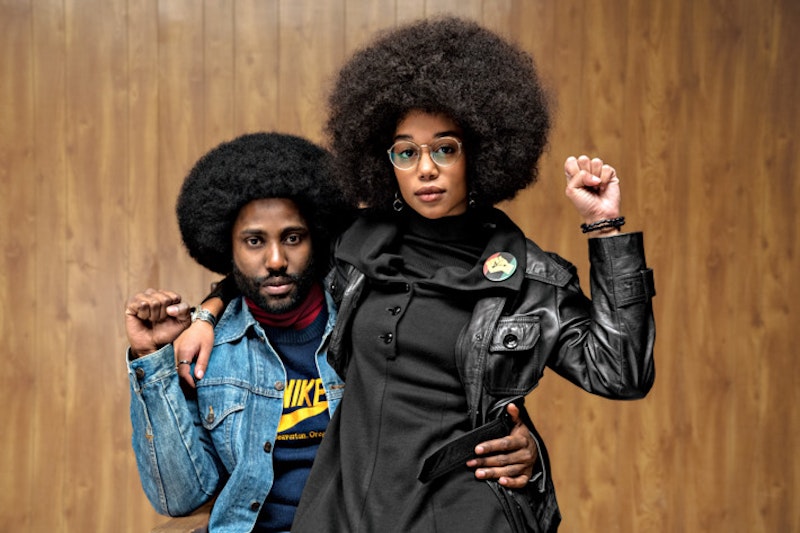 Spike Lee uses BlacKkKlansman to draw a line from Gone with the Wind (opening with the scene of the aftermath of the Battle of Atlanta) to today’s violent white supremacist rallies (closing with direct video footage from the events). Along the way, characters watch or discuss such films as Superfly, Coffy, and—unavoidably in a movie dealing with the Ku Klux Klan—The Birth of a Nation. This ties into the film’s broader concerns about the performance of race, a new spin on the common theme of identity crisis in undercover investigation films.

In this case, the investigation sees a black man joining the KKK, based on a true story. In the 1970s, Ron Stallworth (John David Washington) is the first black officer in the Colorado Springs Police Department. Initially relegated to the records department, he uses an assignment to go undercover at a black activist gathering both to woo a student union leader (Laura Harrier) and keep working in an investigative mode. Turning his eye at the KKK, he strikes up a rapport with the local chapter over the phone, eventually sending another officer, the white Flip Zimmerman (Adam Driver) in his stead to attend meetings. Working together to create a wholly fictional white Ron Stallings, the pair insinuate themselves deeper into the Klan’s good graces, with Stallworth developing a long-distance friendship with Grand Wizard David Duke (Topher Grace).

Lee brings an arch eye to these proceedings, relishing in the inherent dark comedy of the premise. He understands how to show people watching other people, whether that’s in the context of students enraptured by a speech (their faces are framed against all-black backgrounds, conveying what it’s like to be in a crowd and feel as though the speaker is talking directly to you), or a suspicious Klansman scrutinizing Zimmerman’s every move. The movie cuts and frames phone conversations to deliver the maximum comedic impact of Stallworth's code-switching into being a white racist with oblivious villains. The movie isn’t as formally electric as some of Lee’s other recent work, such as Chi-Raq, but it keeps things zipping along.

The question of “passing” weighs heavily on Stallworth, who not only has to maintain a perfect demeanor as a police officer (he has to be the department’s “Jackie Robinson”), but also properly act the part of a white racist over the phone, and fit in with the local black radicals who consider the cops their mortal enemies. Intriguingly, the theme also applies to Zimmerman, a non-practicing Jew whose act as a Klansman forces him to confront his Jewishness and how that fits into the world around him for the first time. He’s had the luxury of not having to be a Jew right up until someone else forcefully reminds him of it, not by any religious or cultural act but by sheer hate of the fact of his being.

As someone of Jewish descent, I could sympathize, though I’m not sure the movie’s appeal to black-Jewish solidarity on the subject wholly works. There are reams of other elements to Jewish integration and the historical “whitening” of Jewish identity in America, and the movie doesn’t really touch on the idea enough to do it full justice. It’s even odder since Driver is given the role that would normally go to the main character in films like this. He’s the guy actually going undercover, the one closest to danger and risking the most. Even though this is supposed to be Stallworth’s story, Zimmerman’s feels more compelling, so perhaps it makes sense that the film would try to “make him black,” in a way, so that he doesn’t feel like he’s taking over a black movie.

Discussions of the influence of cinema on cultural perceptions of identity tie into that theme of passing and performance. Shots of the Klan riotously watching Birth of a Nation are intercut with an elderly activist speaking to the black student union about how the film inspired the rebirth of the Klan in 1915, and how he was a direct witness to the lynching of Jesse Washington. But this also feels undercooked. So, for that matter, does the presence of the student union, and Harrier’s character more generally. The movie dances very delicately around her relationship with Stallworth, not able to fully indulge the romance because it acknowledges the hideous ethical breach of an undercover cop dating a onetime target. It’s in the realm of the activists that the movie also reminds us that, while the Klan are the main villains here, the police are no friend to African-Americans, and yet the question of institutional racism is mostly left behind.

In many ways, BlacKkKlansman’s faults come from the failure to wholly integrate the many different ideas it’s working with, and in no way is that better demonstrated than its treatment of the KKK itself. It delights in portraying the Klan members as pure idiots, with one malapropping “circumcised” with “circumstanced.” Yet it also doesn’t want the audience to forget the real (and continued) danger of American racism—that’s the whole point of ending the film with shots of contemporary white supremacist violence. There’s an obvious scene in which a character warns Stallworth that the KKK shouldn’t be dismissed because, nudge nudge, one day someone with their ideas might get into the White House. But Donald Trump isn’t the result of the KKK. Nor is the wider “alt-right.” They’re the natural endpoint of institutional racism which has been in America since its beginning.

The KKK and similar groups didn’t drag America to the right; the government has been an authoritarian nightmare forever. Trump and neo-Nazis aren’t aberrations—they just say the quiet part of American conservatism out loud. The KKK didn’t lynch Jesse Washington—it was a horde of “ordinary” people. The police have done the heavy lifting in killing black Americans in the decades since the KKK fell from power and influence. BlacKkKlansman dismisses such police as bad apples, and makes a heroic figure of the undercover officer, a longtime tool of oppression against the black community. But no one ever lost money by displacing blame for America’s ills from its institutions to some “bad” people for the benefit of liberals.