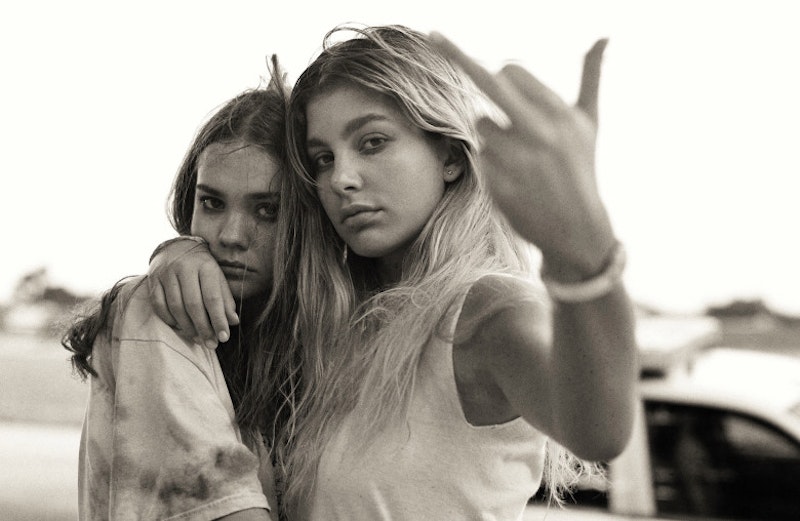 Never Goin’ Back is the rare movie that takes a thin premise and goes in wonderful directions. A modest Sundance hit, the film, directed by first-timer Augustine Frizzell, transcends its stoner comedy roots and makes something unique out of them.

This film, just over the 80 minutes, is based on a lot of things I normally can’t stand, most notably stoner humor, vomit and feces jokes, and the idea that it’s “shocking” for women to act as raunchy as men. But the execution is so good that I couldn’t stop laughing.

Never Goin’ Back is far from a Cheech and Chong comedy. It has a lot more shared DNA with the likes of Spring Breakers, as well as last year’s The Florida Project and Tangerine, from the same director. It’s about a pair of friends who need to get through a day and make a certain amount of money. And it takes those stakes seriously. It stars Maia Mitchell (from the Freeform series The Fosters) and Camila Morrone (Bruce Willis’ daughter in the bad Death Wish remake) as Angela and Jessie. They’re friends/roommates/possible girlfriends (their exact relationship status is kept somewhat ambiguous and mostly unremarked upon, in the Millennial tradition.)

This film, while dark at times, is consistently funny. It’s certainly the only movie this year that’s turned a character’s constipation into a Chekhov’s gun. And the finale, which both recalls Boogie Nights and mentions it by name, is the best scene.

Never Goin’ Back threads a difficult needle in that it establishes these characters as self-destructive, drug-addled, and not especially bright, while nevertheless humanizing them and making us root for them to eventually make it to that beach.

The Spy Who Dumped Me Saved by Sharp Script

Speaking of surprisingly raunchy female duos, The Spy Who Dumped Me has a high concept that isn’t great, a spy plot that’s somewhat incoherent, and its action scenes are choppy and amateurish. But its script is so sharp, and Kate McKinnon delivers such a high-energy performance, that by the end I didn’t care about its shortcomings.

Directed by Susanna Fogel, The Spy Who Dumped Me starts off on a shaky premise. Mila Kunis’ Audrey discovers that her boyfriend-until-recently (Justin Theroux) is secretly a spy, and then he gets gunned down in her apartment.

Suddenly on the run from a shadowy international syndicate, Audrey and her best friend Morgan (McKinnon) get swept on a globe-trotting spy adventure that takes them to multiple European capitals. They hold their own in multiple chase and fight scenes, despite zero spy training.

Those action scenes? Not great. Plagued by lots of shakycam and too many extreme close-ups, the inspiration is clearly the Bourne films, and not in a good way. While one chase scene, in an Uber, is well-staged, it compares unfavorably to a similar sequence in the recent Mission: Impossible—Fallout.

But the film has a witty script, with a great structure and first-rate gags. There’s a joke involving Edward Snowden that pays off absolutely immaculately. And while the climactic battle in a spy movie taking place at a black-tie gala is a tired trope, The Spy Who Dumped Me finds a new spin, thanks to some smart costume choices and the strategic use of a trapeze.

McKinnon’s character is an amazing creation. She delivers asides that hint at a strange, colorful former life as aspiring theater person. She’s been the best thing about SNL for years, as well as of the Ghostbusters remake of two years ago, and she may soon break out as a movie star.

McKinnon and Kunis’ chemistry is wonderful, as the film doesn't just slide them into traditionally male roles. It’s a fine portrait of female friendship, amidst all the global spy shenanigans.

Meanwhile, the supporting cast is full of winners, starting with Gillian Anderson as a spy boss who McKinnon fangirls over. Hasan Minhaj plays a CIA guy who can’t stop mentioning he went to Harvard. Also Paul Reiser and Jane Curtain (!) as McKinnon’s parents, and Ivanna Sakhno as another wonderful creation, an evil assassin/gymnast.

Finally, whoever was the music supervisor deserves a raise. The first sound we hear is the opening whistle of Scorpions’ Cold War anthem “Winds of Change,” and I’d just love to hear how the filmmakers got the rights to a Crash Test Dummies tune, in order to describe it as the worst song on the jukebox.