Matt Bomer in Anything is just the latest example. 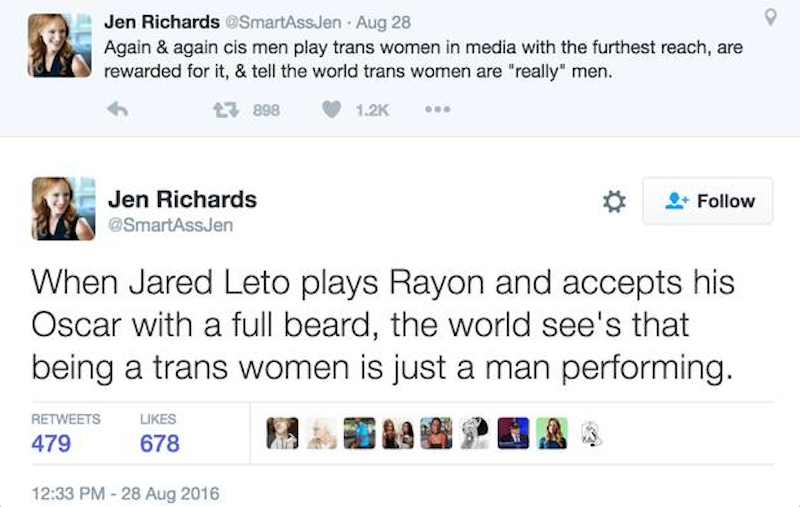 This week’s column was going to be about something sweet, so we could spend some time on the Good Things about being trans. I talked to a closeted but quietly ecstatic friend and everything. But then Mark Ruffalo and Matt Bomer did some lousy shit so now I have to yell some more. Don’t blame me: it’s their fault.

I continue to be mystified that Hollywood has not collectively read my scathing review of last year’s The Danish Girl and realized that you shouldn’t cast a cis man as a trans woman. But at least a few people missed that memo (and the several hundred like it which crop up every time casting directors pull this shit), which explains why Ruffalo cast Bomer, a white cis gay man with whom Ruffalo had acted in The Normal Heart, to play a trans woman in Anything.

Don’t take my word for it. Take actual, real-life trans actress Jen Richards, who took to Twitter in an instantly-viral tweet thread which outlined exactly why Bomer’s casting contributes to transmisogyny and violence. “Cis men playing trans women leads to death,” she wrote. “Straight men are attracted to trans women...BUT they are afraid that being with trans women makes them gay/less masculine. They seek us out, enjoy us, and then punish us for their anxiety.” Most crucially, she tweeted at Bomer and Ruffalo directly, saying, “You will exacerbate the cultural belief that trans women are really men, which is the root of violence against us.”

This is especially true because Bomer will play a trans sex worker in the movie, a career path that results in violence for so many trans women exactly for the reasons Richards laid out. But I kept seeing people popping up to critique: Can you prove that? Where’s your evidence that this is the reason people keep murdering y’all?

Listen: when we get a comprehensive study of people who’ve assaulted or killed trans women, we will let you know. But that requires several things, foremost of which are justice systems that punish this violence (as opposed to allowing the “trans panic” defense, which is still admissible in every state except California) and scientific establishments which treat trans identities as legitimate rather than conditions which need to be proven based on some bizarre idea of “rigor” (read: hoop-jumping). Until those institutions are reformed thoroughly, we’re not going to get a psychological study of those who commit violence against trans women; we’re going to have to “settle” for testimony from activists like Richards, who have been active in the community for years and have spoken to victims of transmisogynistic violence. To ask for scholastic citations at this point is to knowingly derail the subject to score debate points, and it makes you kind of a shitlord.

But here’s some anecdotal evidence that will help explain why Richards is spot-on. A month ago, I was leaving a friend’s apartment and stopped in the shade of a grocery store awning to check my phone. While I was standing there, a cis guy exited the store and threw a “how YOU doin’” catcall my way. Responding automatically, I said “hi” quietly; he threw me a look as he walked by and exclaimed, “That’s a DUDE? Damn,” and walked away shaking his head. Not only did he think that I was “really a man under that dress,” that realization dehumanized me to him such that he couldn’t even talk to me like I could hear him.

This sort of thinking—that trans women are wearing womanhood like a costume, and that we are “less than” as a result—is everywhere. It’s in men who think sucking off a trans girl makes them gay; it’s in casting directors who think hiring cis men for transfeminine characters is “realistic”; it’s in the mainstream news media, who insist on using the phrase “born a man” (there are hundreds of examples of this in the past year alone) to describe out trans women.

It’s that last example that I want to latch onto, though, because I think it gets to the bottom of why this line of thought is so insidious in entertainment. Let’s leave aside how the “born this way” narrative leaves many trans people behind, and simply acknowledge that most trans people have experienced their gender identity from a very early age. When the prevailing line of thought is “this woman was born a man,” though, it seems like most cis folks immediately think, “Well, what would drive a man to want to be a woman?” Nobody says, “Why would that woman pretend to be a man for so long?” because even to some of our closest allies, we haven’t always been women; we only “count” after our confession has been publicly logged and we start learning how eyeliner works.

We can thus understand Hollywood’s logical leap: if we want to explore why a guy would want to be a gal, let’s get a dude and have him try to figure it out! Never mind that the guy in question is “wearing” our identity just like trans-exclusionary feminists accuse us of doing to womanhood in general; never mind that this is a fallacy supported by only the most hurtful logical gymnastics; never mind that casting men over trans women perpetuates the systemic income inequality which has plagued the trans community for decades. Cis men are viewed as “close enough” to trans women that it makes no functional difference, which leads to the sort of violence that Richards describes.

Like Richards, I don’t enjoy talking about this (although she’s had to deal with far more questions and interrogations by cis media outlets on this topic than I can ever imagine and is still going, while I’m frustrated and tired already). But despite Ruffalo’s assertion that “It’s time” for this conversation just now—where have you been, dude?—we seem to need this conversation every time a bad movie fucks up, so I guess we require more essays, more activism, and more pressure. Richards’ tweetstorm is a wonderful step in the right direction. Now, let’s see some action from entertainment media beyond the boring, go-nowhere mea culpas we’ve seen in the past. Because frankly, cis entertainers, your apologies mean nothing. Your actions do—and right now, your action should be listening.