In Coffy, you can fight ideology with a shotgun. 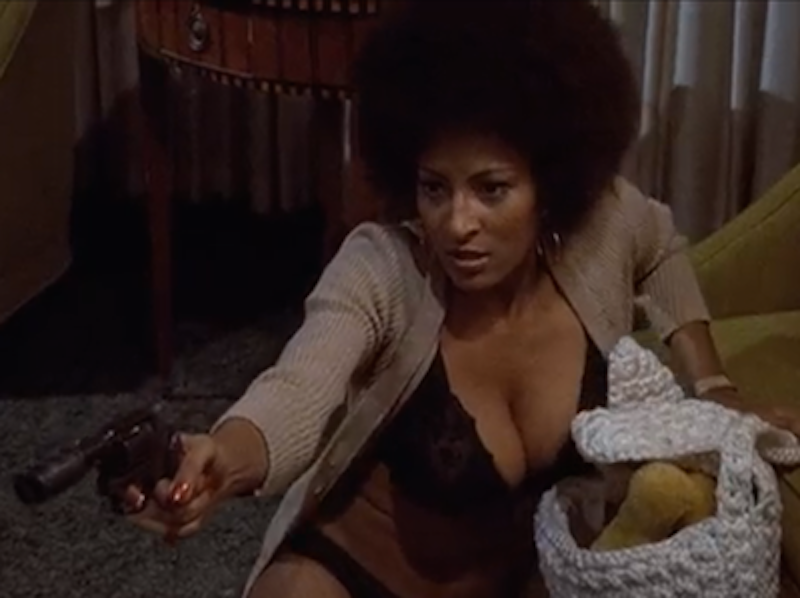 This is the ninth post in a series on political films. The eighth, on The Candidate, is here.

Jack Hill's 1972 blaxploitation provocation Coffy is known for its bare breasts, razor blades in afros, shotgun blasts to the crotch, and spectacular 70s sleaze-flash wardrobe. It's not generally considered a political film. And yet, a political campaign is central to the story. The heroine, Coffy (an incandescent Pam Grier) is dating a Congressional candidate, Howard Brunswick (Booker Bradshaw.)

The plot focuses on Coffy's effort to get revenge on the drug dealers who hooked her sister; Howard's political race seems peripheral. But it soon turns out that he, like so many politicians in Hollywood, is corrupt. Howard’s in cahoots with the drug runners; they pay for his campaign, and he agrees to work with the corrupt police chief to make sure nothing interferes with the business.

On the campaign trail, Howard pretends to care about black equality and black freedom. The troubles of the ghetto, he tells a throng of black supporters, are caused by "a vicious combination of big business and government which has kept our sisters prostitute and our brothers dope fiends." But it's all an act—literally, since it's revealed that Howard's speech is filmed by a white camera crew as a staged ad. Howard explains his real political position later to the drug dealers: "Black, brown or yellow, I'm in it for the green." As in other political films from The Great McGinty to The Candidate, in Coffy only suckers believe in ideology, or identity. The real political arguments are over who’s going to get paid.

Or so Howard wants to believe. His claim that race is irrelevant is undermined by the rest of the film. Howard, in his political speech, declares that black people don't benefit from drugs; that the money made from dope ultimately goes to white people. Howard doesn't believe this, or doesn't care—but, Coffy shows, he's still correct. The drug dealer Howard deals with, Vittroni (Alan Arbus), has just taken over the activities of black local pimp and dealer King George (Robert Doqui). When Vittroni erroneously concludes that George has betrayed him, he sends his thugs to kill him—which they do by tying a noose around his neck and dragging him behind their car.

In case George, or the viewer, miss the symbolism of the noose, Omar (Sid Haig) makes jokes about lynching and spews racial epithets while committing the murder. For that matter, Howard's race also becomes an issue when Vittroni starts to suspect him too. Why would I betray you?, Howard asks Vittroni, and the answer is: that his race makes him untrustworthy. "These people all stick together like brothers. You can't trust them," one of Vittroni's nastier henchmen declares. Howard eventually wins Vittroni over, but only by letting the drug kingpin murder Coffy. In his speeches, Howard talks about the "white power structure" which destroys black men and women. In the film, the most visible power structure is the drug mafia. And, just as Howard says, it’s controlled by unashamedly racist whites, who dislike and distrust black people, and murder them for fun and erotic thrills. Vittroni gets off on calling Coffy a "n----- bitch" and telling her to crawl to him.

Coffy is a pretending to be a sex worker when Vittroni abuses her; it's a kind of sex game. But nonetheless, the fact that he's got a button for racial humiliation shows pretty clearly that there are gratifications, and motivations, that are black and white, rather than green. Racial animosity and anger leads people to betray, to kill, to lust. People who pursue power are motivated, not just by cash, but by ideology—racist ideology, in this case.

Coffy identifies a political problem, but it has no political solutions. Democratic institutions are largely useless; Howard's a shill, and when Coffy's police officer friend defies the mob and threatens to report his corrupt partner, he’s quickly beaten into a coma. It’s only Coffy, with the razors in her hair and shotgun in her hand, who’s able to destroy the "white power structure" by butchering everyone associated with it. "You want to spit on me and make me crawl? I'm gonna spit on your grave tomorrow!" she declares, and then does just that.

At the end of the film, Coffy says she feels like she's in a dream—which of course she is. The dream is a revenge fantasy. Coffy is seeking retribution for her sister, in theory, but the film makes it clear that her vengeance is on behalf of all her sisters and brothers who’ve been ground down by the politics of neglect and violence. It's a simplistic empowerment fantasy, and the mix of bleak cynicism about collective action and hyperbolic glorification of individual violence arguably makes any actual political change harder, not easier. But at least Coffy is aware that politics is not just about money, compromise, or corruption. It's about hate. Hollywood political films are rarely so insightful or honest.