On The Light Between Oceans. 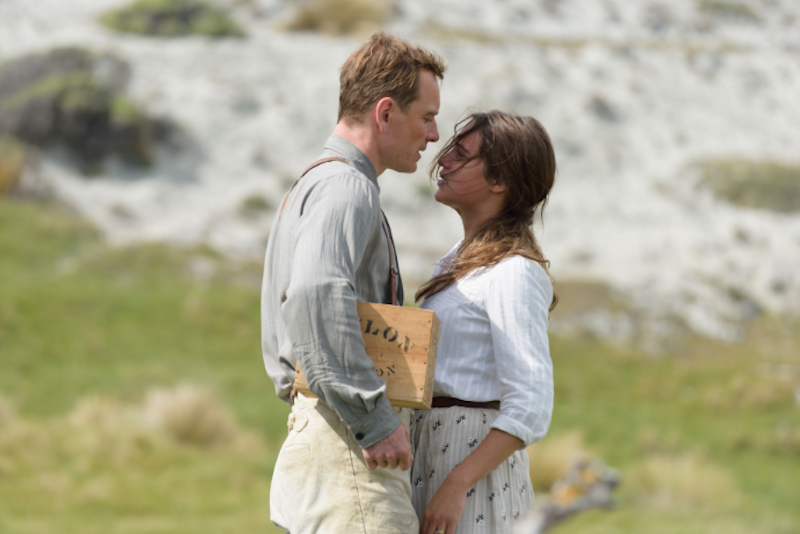 The Light Between Oceans essentially takes the main plot of Raising Arizona, subtracts all of the wit and humor, and reinvents it as an Oscar-baiting prestige drama. It’s tasteful, well-made and has three different strong performances, but overall it’s far from the best work by any of the principals involved.

Based on a novel from 2012 by M. L. Stedman, The Light Between Oceans is set on the Western coast of Australia in the years following World War I. Tom Sherbourne (Michael Fassbender) is a widowed war hero who takes a multi-year assignment guarding a lighthouse.

Over the course of taking the job, Sherbourne comes across the fetching Isabel (Alicia Vikander), and they soon marry, enjoying a solitary life in the lighthouse. The two soon try to start a family, but suffer multiple miscarriages. One day, a boat arrives on the island, with a dead adult male and a live baby. The couple decides not to tell anyone about the man or the boat and to raise the child as their own, but that plot runs into complications when they later come across the baby’s mother (Rachel Weisz).

The Light Between Oceans was directed by Derek Cianfrance, who is best known for 2010’s Blue Valentine with Ryan Gosling and Michelle Williams, a powerhouse of a film that’s one of the most devastating portraits of doomed love ever put on screen. The director's 2013 follow-up The Place Beyond the Pines, once again with Gosling as well as Bradley Cooper, was a bit more uneven but still had its moments.

The new film doesn’t have anything wrong with it in any particular way—it’s well put together, with some outstanding visuals, most of them involving the lighthouse itself. But there’s nothing about it that really stays with the viewer. When I first saw Blue Valentine, it wrecked me for weeks.

The best thing about The Light Between Oceans is the performances. Fassbender and Vikander—a real-life couple, I understand—are both quite good, conveying the heartbreak that the plot’s situation puts them in. For Fassbender, this isn't quite his performance in Shame—for my money, the single best turn by any actor in the last 10 years—but it beats his outing as Steve Jobs. And I liked Vikander more here than in either the recent Jason Bourne or her Oscar-winning turn in The Danish Girl.

The same is true of Weisz as the grieving mother; this the best she’s been used in a long time. Also on board is Bryan Brown—from Cocktail and F/X—in a small but lovely role as Weisz’s father. There is one rather glaring plot hole that I won't go into here, but other than that the screenplay by Cianfrance shows few major flaws.

While not likely to meet its obvious awards-season goals, The Light Between Oceans is an above-average, perfectly serviceable drama. Those are some pretty people, and that is one pretty lighthouse.