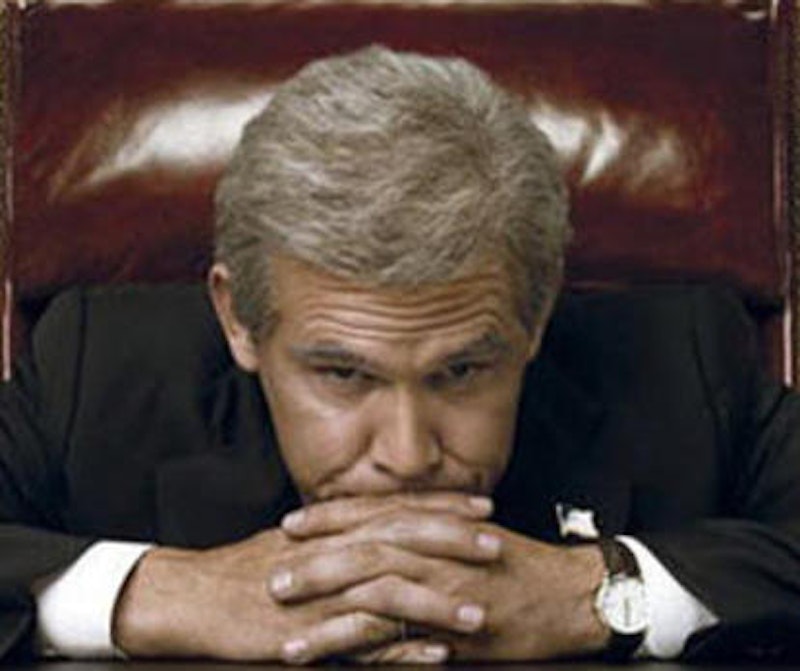 The other day I was talking to someone about the new Edward Snowden movie by Oliver Stone, and his 2008 satire W. came up. They said, “Bush seems like a million years ago now. It’s hard to remember anything about him.” I was stunned, stammering like Porky Pig. It never felt like the Bush years ended to me: we’re still mired in the Middle East, Obama has continued and even enhanced many of Bush’s policies without nearly the same level of public scrutiny and outrage, and the shadow of 9/11 still looms, with regular waves of horrific attacks by ISIS and their deranged devotees. Everything that Obama got done was mostly cosmetic: an attempt at universal healthcare that ended up severely stepped on; breaking his first promise as President to close Guantanamo Bay; a very belated endorsement of legalizing gay marriage (something that would’ve happened with or without Obama); and making history as the first black president, leaving office with a country as racially fractious as the early-1960s. He did nothing to allay the pain of those protesting in Ferguson in August 2014 when tanks and soldiers showed up, an occupying force. Sure, he’s cool—he fucks with Kendrick Lamar’s deep cuts, his Presidential Playlists are pored over and analyzed, and he gives great speeches. But he hasn’t done anything to lift the fog of the Bush years.

I hadn’t seen W. since its release in October 2008, so I watched it again the other night with the new Obama biopic Southside With You in mind. Written and directed by Richard Tanne, Southside With You follows Barack and Michelle Obama during their first date in the summer of 1989. It’s a nice little whisper of a film, barely 84 minutes and laser-focused: half a day that became history. It’s sweet, non-eventful, but anodyne and meaningless: without a budget or any name actors, this film is destined for bargain bins and library vaults. But it’s that same sort of fond farewell to an outgoing two-term President that W. was. If you don’t remember, Stone’s movie actually ended up remarkably sympathetic to George W. Bush, and accurately made everyone in his administration out to be the evil fucks who destroyed every ounce of good will this country had after 9/11 with a botched war with Iraq that was never made right. I remember at the time, W. felt amorphous and plotless, jumping quickly from decade to decade and city to city in between all the first-term stuff. But we were too close to it back then, just a month before Obama was elected. W. is so much better than I remember, and its scattered style conveys an anxiety that characterize the 15 years since 9/11. There’s a PTSD quality to the movie, remembering a lifetime in bits and pieces as if they’re escaping repression and denial.

It’s not fair to compare W. and Southside With You in terms of budget or polish, but they both capture the mood and the narratives of the presidencies they’re closing. At the end of 2008, we were buried under tragedy and catastrophe: 9/11, Iraq, Afghanistan, Katrina, and the sudden financial collapse that pummeled the country’s spirit. Stone’s film aches with sadness and shock, a memory full of holes and trauma unprocessed. Southside With You is scarier and far more sinister: innocuous idol worship, nice but slight, lacking in examination of any depth beyond the boilerplate biography of the future President and First Lady. I think Stone’s upcoming Snowden will be the polemic everyone expected W. to be, an urgent criticism of Obama’s lack of transparency and our unchecked surveillance state. W. is so sympathetic to Bush, and it really moved me eight years later, because he really was an endearing guy. Simple, inarticulate, and manipulated by those around him; but somehow still unwitting and hapless. It’s like when that guy threw a shoe at Bush at a press conference in late 2008: he deftly dodged the thing, and came up grinning. That’s his presidency in a nutshell: unyielding anger and a pathetic failure to respond.