Forty years after All the President's Men, we still want conspiracies to be true. 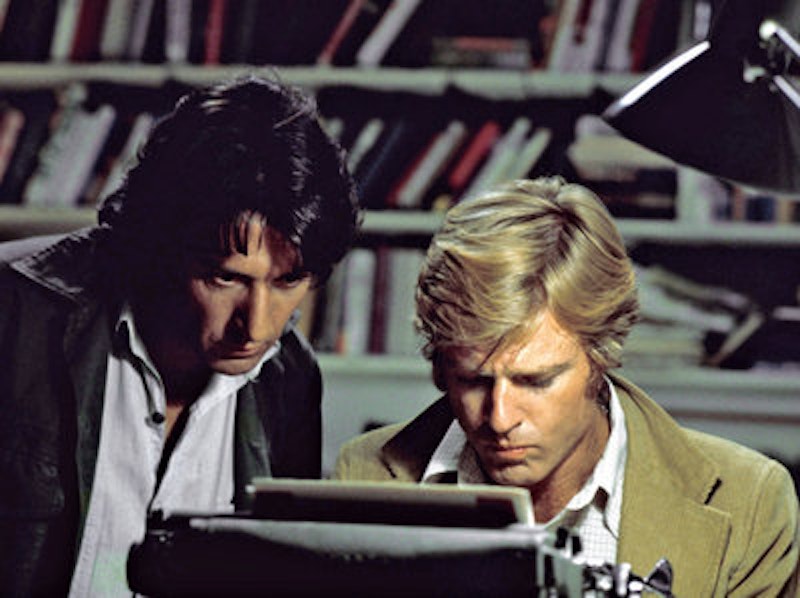 Everyone loves conspiracy theories. A story of corruption and secret machinations appeals equally to those of every political persuasion. Whether it's Marco Rubio assuring you that Obama knows exactly what he's doing, Donald Trump railing against the Republican establishment, or Bernie Sanders demanding Hillary Clinton's Wall Street speeches, the underlying story is the same. There are bad guys you can't see, and they control everything. Expose the truth, and set yourself free.

The ur-conspiracy of the modern era is Watergate, and the most famous account of Watergate is All The President's Men, released 40 years ago this week.  All the President's Men routinely shows up on greatest movie lists, and is widely considered a classic. It's certainly competently done; Robert Redford looks suitably serious and charismatic as the serious, charismatic Washington Post reporter Bob Woodward, while Dustin Hoffman employs his jittery, idiosyncratic method-acting shtick to portray the jittery, idiosyncratic reporter Carl Bernstein. The rest of the newsroom actors are suitably earnest and crusty. The cloak and dagger melodrama—especially the meetings with Hal Holbrook as Deep Throat in the parking garage, are suspenseful. The shoe-leather plot, emphasizing reportorial ingenuity, is clever; the scene with Bernstein sipping endless cups of coffee in order to get a reluctant witness not to kick him out of her home is a highlight.

But what sets All the President's Men apart from other competent, well-acted Hollywood films isn't thematic complexity, stylistic innovation, or excellence of performance—on those measures, President's Men falls far short of Howard Hawks' His Girl Friday (1940) which addressed the value, allure, and shortcomings of the press with greater subtlety, understanding, and verve three decades earlier.

President's Men offers authenticity. Conspiracies are virtually synonymous with evil and wrongdoing in Hollywood. From His Girl Friday, which exposes a venal bribe-taking mayor, to Captain America: Winter Soldier, in which the evil Hydra has infiltrated the virtuous SHIELD, to London Has Fallen, Batman vs. Superman, or any other multiplex action thriller you'd care to name—the secretive bad guys are always plotting against and corrupting the good. But for the most part when you go to the theater those super-villainous tales of corruption are just fantasies.

But there was a Watergate. All the President's Men is the ultimate validation of the ubiquitous conspiracy plot. Lots of films tell you that the government, the police, the corporations, the multinational terrorist conglomerate is more powerful, more all-encompassing and evil than you think. And then you get All the President's Men with evidence that the media was right all the time. Evil people were doing evil things and plotting to undermine democracy.

You get an analogous charge from last year’s Spotlight, with its story of courageous reporters uncovering the Catholic child rape scandal in Boston. Such films, based in reality, confirm the standard mode of Hollywood heroism. The good guys, isolated, alone against the odds, uncover the conspiracy of powerful forces. Information, delivered to you via media networks, will wipe out evil in the name of good.

Of course, conspiracies and corruption do exist, as Watergate and the child rape scandal in the Catholic Church both demonstrated. People should be skeptical of institutions and authorities; the media has a role to play in holding the powerful accountable. But if skepticism is a virtue, it might be worthwhile to be skeptical, too, of an entertainment regime that so assiduously peddles paranoia.

Melodramatic conspiracy is a simple, exciting, empowering story. Learn about the bad guys, expose them, and bring them low. Those narratives are so much fun, people want to apply them everywhere. If only the evils of liberals, the Koch Brothers, Hillary Clinton, or John Boehner, is dragged into the light, virtue will triumph, and wrong will be swept away.

In most cases, though, wrong is more complicated, and difficult to address even when it's not particularly hidden. You don't need to be a first-rate investigative reporter to know that the U.S. continues to be massively segregated; all you need to do is live in a large city, or a small one, and use your eyes. Economists know growth has stalled out over the last 30 years in the United States; why and what to do about it are a much trickier question. No one villain decided to create segregation, unless you want to consider generations of white people acting out of and manipulating prejudice as a villain. There was no consortium of evil businessmen or politicians who decided to slow growth rates.

The biggest wrongs and problems are often the result of complicated political choices, broad inequities and hatred that aren't easily rectified by a tight-knit band of righteous content providers. Woodward and Bernstein's role in the investigation has been consistently exaggerated: other news organizations broke important parts of the story, and government investigators were the ones most directly responsible for bringing down Nixon. The search for single causes, and conspiratorial wrongdoers, can quickly turn into a search for single heroes, and for scapegoats to punish, a la Trump and immigrants, or Muslims, or whoever he's decided is the best candidate for a five-minute hate rant this week. All the President's Men is a decent movie, based on a true story. But the excitement about the truth of the story shouldn't obscure the fact that that story sometimes isn't true.